A Community Institution Thrives Anew: 120-year-old Batesville Market provides a showcase for the best of everything local

Nestled just 20 minutes west of Charlottesville, near the Blue Ridge Mountains, is the 120-year-old historic country store that houses Batesville Market. The building has been home to a variety of business models since then, including 80 years of ownership by the Page family (from 1914-94) as a country store, a convenience store in the early 2000s, several different restaurant models from 2011-15, and more recently a successful retail operation featuring locally made food and artisanal products and weekend live music. However, through all of those 120 years it may be the recent sale of the business for only $1 that emerges as one of the most surprising pieces of history to happen in this small but lively community store.

The property itself is owned by David and Alexander Struminger, and their siblings.  The business was operated since opening in April 2017 largely by Struminger, a communications technology consultant and entrepreneur, and Patricia Dougherty, a nurse practitioner at the Virginia Department of Health, both residents of the Batesville area.  Struminger’s model for the store centered on a homegrown theme, including specialty foods like gluten or dairy-free alternatives, organic, locally and sustainably-farmed products, locally produced goods, and healthful fresh deli items for eat-in or take-home.  It also included live music by local singer-songwriters, locally-produced fine artisan crafts, and local beer and cider on tap.

“The last three businesses who operated in our 100+ year old country store were driven by restaurant models with live music on weekends, but didn’t scale and eventually closed. We thought that a retail-driven model would be more likely to scale and become sustainable,” Struminger explains.

Since 2017, the community has embraced Batesville Market.  In fact, much of the inventory for the new store was purchased through a community-based GoFundMe campaign.  Batesville Market then returned the favor by offering credits on purchases to members of the community. The business model flourished, but Struminger’s search for managers for the store was less successful, leaving him to put his consulting career on hold to run the market himself.

“It became clear to me that the store could only work with an owner operator.  So, if I wasn’t able to give up my career and operate the store, then I couldn’t be the owner.  It’s just that simple,” Struminger says. 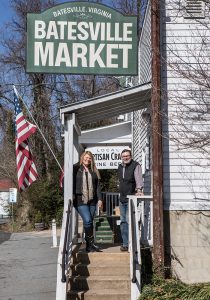 New owner Kristen Rabourdin on the porch of Batesville Market with Alex Struminger, the former owner who sold her his business for $1 after a stringent screening process.

With an eye on moving forward in the best interest of the whole locale, Struminger and his family brainstormed ways to find a new owner who would operate in a way that continued to serve the people of the community.  It was then that they developed the idea of selling the store for $1, a concept that drew immediate attention from hundreds of interested buyers.

“The NBC TV story picked up on that and suddenly we had publicity.  That’s how we got 250 emails,” exclaims Struminger.

With such an unexpectedly tremendous response in response to NBC TV, as well as articles in the Daily Progress and the Crozet Gazette, Struminger had to create a selection process to determine the best potential owner of the market.  Applicants were initially sent eight-page questionnaires with essay questions that the market owners scored and ranked.  Then, the owners conducted half hour phone interviews of the top seven candidates.

Ultimately, four candidates were chosen, and after one finalist dropped out, the remaining three were asked to pitch to a panel that consisted of Batesville business owners, community members, and several volunteer advisors from the Charlottesville businesses, the Darden School of Business, and the Charlottesville Business Innovation Council (CBIC).  Fifteen minutes were given to each candidate to address three key points, then ten minutes were allocated for questions from the panel. Afterwards, the panel discussed the presentations, then made recommendations to the Batesville Market owners.

The Batesville Market owners chose Charlottesville resident Kristen Spaulding Rabourdin, who has spent nearly 30 years concentrating on retail strategies, community engagement, marketing, and communications with a hearty focus in the food industry.  Rabourdin’s background focuses on local, sustainable and accessible food systems and social justice initiatives. Her experience and dedicated work in the food industry were key, but her passion was a strong point, too.

“Owning a country market has always been a dream of mine…I am so incredibly excited for this next chapter for both myself and The Batesville Market.  I don’t just see this as ownership, I see this as me being the steward for this historic 120-year-old market. It’s an entity that existed well before me and it’s my honor to help it thrive beyond me,” says Rabourdin.  “It’s the place where people run into neighbors to catch up, where we learn about celebrations and struggles, where we nourish our body and soul.”

Struminger is enthusiastic and optimistic about Rabourdin’s purchase of the business, and how her experience will contribute to the store and community overall.

“As for selling my business and vision for the community, of course I have to let go of my baby.  But I think Kristen will do a much better job than I did. She has better experience than me. She will take it to the next level, and our whole community will benefit.  From that point of view, I’m relieved to have a strong steward take over the vision and make it hers. We literally live next door, so I’m looking forward to being a strong supporter and regular customer,” says Struminger. 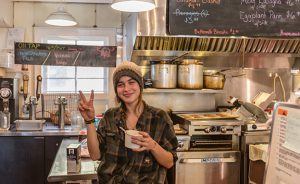 Batesville Market’s kitchen produces meals for dine-in or take out, including fresh-made deli sandwiches, salads, and soups, and the grill is open on weekends.

While Rabourdin currently resides in Charlottesville, she has been a member of the Batesville community, having lived there when she first relocated from New Jersey 15 years ago.  She’s remained a frequent visitor to Batesville and its nearby businesses and continued to connect with friends in the community.

Many of those friends are likely on the long list that she says have been generously offering their help to her, in addition to the support she’s received from her family.

“One of the best parts for me is to have my family as part of this endeavor with me!  My children, my mom and my partner are all working shifts or pitching in somehow. We are very excited to take this on together.  I’ve also had so many friends offering to help with anything I need. I am so incredibly lucky to have such a strong community of family, friends, and colleagues as my village,” Rabourdin shares.

As history has shown at this community market, it has taken a special commitment to delivering products and experiences that Batesville is looking for in order to remain successful.  Rabourdin intends to maintain and expand the elements that have made the market’s most recent iteration successful under Struminger’s tenure.

“There are so many wonderful aspects to The Batesville Market that serve as a foundation to the business.  I want to expand on that foundation by growing our prepared foods, grocery, and unique beer offerings and give customers more reasons to stop in at the store,” Rabourdin says. 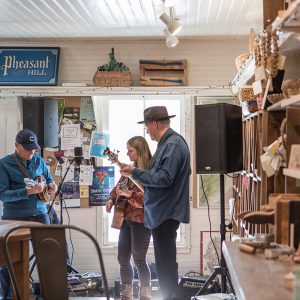 Jeff Vogelsang, Tara Mills, and Bill Collins entertain at the Market, a haven for local musicians.

“I come from a musical family, so the music is a huge bonus for me and our customers love it.   It’s a wonderful way for the community to gather and experience phenomenal talent in a quaint and fun country setting, she says.  “I am looking forward to bringing more events, especially those that showcase the local talent and knowledge of our neighbors!”

As a neighbor of the market, Struminger intends to continue to show his own support as a patron and is confident in Rabourdin’s ability to maintain the market’s commitment to the community and its reputation as a comfortable gathering place in the area.

“I want to emphasize that my family and I see this as a community social venture.  If Kristen succeeds in continuing and growing the Batesville Market, which we think she will, then we have been successful in our mission for the community,” Struminger says.

As for Rabourdin, her excitement for her new endeavor is palpable, and her enthusiasm for the market is undeniable.

“Anyone who spends time here knows that the place is magical.  Come sip some wine or a beer on the front porch while listening to live bluegrass.  There isn’t a better way to spend a Sunday afternoon,” she says.