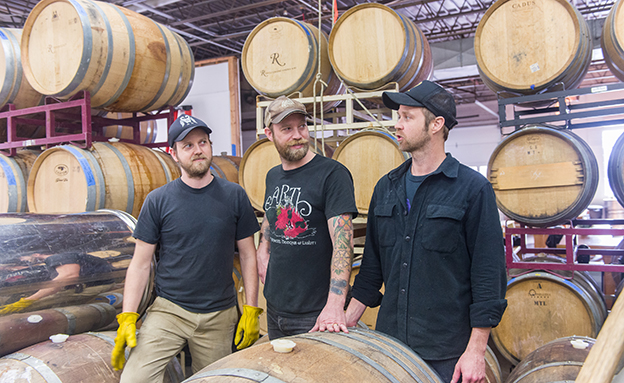 The Carney brothers are Lain, Jennings, and Van (L to R)

Before there was Pen Druid, there was Pontiak, a psychedelic-rock band formed in the foothills of the Blue Ridge Mountains by the Carney brothers: singer and bassist Jennings, lead vocalist and guitarist Van, and drummer Lain. Formed in 2004, the group had earned critical acclaim and developed a worldwide fanbase with their hard-hitting riffs, droning soundscapes, and hypnotic vamps.

While on tour in Belgium, the power trio visited Saint Bavo Cathedral in Ghent to behold the magnum opus of two other talented brothers, Hubert and Jan van Eyck, the fifteenth-century Flemish Renaissance painters whose joint work the “Adoration of the Mystic Lamb” is one of the art world’s prized treasures. The multi-panel triptych, which depicts Adam and Eve, a majestic and ornate Jesus, and a gathering of saints around the Lamb of God, is maximalist, gorgeous, and sublime.

The three brothers left the cathedral in awe, strolling through a nearby courtyard to a café where they could sit, mull over the spectacle of the art, and have a stein or two of the local brew. While journaling about the experience, Jennings sipped his beer, a typically mundane act that he happens to recall vividly: “This beer blew my mind. It was a completely different animal. Not a crazy, rip-your-mouth-out IPA, more traditional than that. Sour, but not sour for sour’s sake. This was the kind of beer I wanted to make.”

True epiphanies are rare, but when they occur they alter the trajectory of a life considerably. The term derives from Greek meaning a “striking appearance” or “manifestation,” and here on a coaster in a café in Belgium was the physical embodiment, a tangible symbol, of the next phase of his life. A single beer is rarely life-changing, but this one conjured words from deep inside—complex, stunning, unexpected, and ecstatic—words that could describe both the Van Eycks’ masterpiece and this brew. “How do I make this beer?” Jennings wondered.

So what was this beer that was so singularly spectacular it inspired a conversion, a near-ecstasy of sorts? A gueze, which for the uninitiated amateur like me is a blend of aged and young lambics, a type of dry, cidery Belgian beer. The flavor derives from the wild yeast used to cultivate and ferment the beer. This isn’t some wholesale, mass-produced yeast ordered from some supplier hundreds of miles away. No. This yeast was nurtured across generations; it is a fossil, a relic, an heirloom handed down from generation to generation.

When the brothers unloaded their guitars and drums at the airport, they brought with them something else, something borrowed from Belgium that not even the shrewdest TSA agent could detect: a knowledge, a brimming excitement to approach an ancient art from a new perspective. 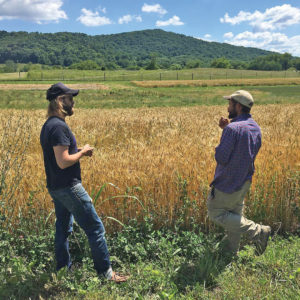 Upon returning to Sperryville once the tour was over, the Carney brothers scoured and foraged along the Thornton River to gather their own wild yeast samples. In November of 2015, they gleaned wild rose hips, flowers, fragments of bark, blades of grass, a discarded coffee bean, anything and everything that crossed their path. In total, they collected 50 samples which were then cultivated in vials to ferment. Of the 50, 10 were good, three were viable, and two—the wild rose hip and a small, nondescript white flower—merged into one culture. Wild yeast is the backbone of Pen Druid’s beers; it’s the factor that infuses their beers with the Piedmont. “All of our processes are guided by the yeast,” Jennings says. “How does it taste? How do we keep our yeast happy, healthy, and vigorous?”

The fascination with and respect for wild yeast don’t end there. The brothers also implemented the antiquated, finicky, and unorthodox method of spontaneous fermentation. The process starts with a nutrient-deficient, unfermented, opaque beer called a “wort” that is then boiled in a wood-fired tank for five hours to increase and caramelize the sugars through evaporation. This mixture is sprayed into cool-ships, shallow copper pools that allow for a gradual drop in temperature over the course of twelve hours. During the cooling process, airborne yeasts consume and ferment the wort. Like the harvested samples, these airborne yeasts are irreproducible in any laboratory and impart a distinct flavor. As any wine connoisseur will tell you, a fine wine is infused with the region’s unique terroir. This is the microcosm contained in the flavor: the climate, the soil conditions, the topography. Expert sommeliers are, in a sense, cartographers; their knowledge of terrestrial elements and their cultivated palettes seamlessly intertwine, map unforeseen connections, and then translate these relationships between land and taste into language to describe what differentiates one wine from another.

“I like to call it the ‘air-oir,’” Jennings jokes. He pauses. His demeanor is cerebral, measured, even-keeled. Then he adds, “Another definition of terroir is ‘cultures,’ those that brew the beer, their sensibilities and tastes, their definition of what makes a beer ‘good.’”

Spontaneous fermentation is unconventional, nonconformist, and anachronistic. Only two other breweries in Virginia produce spontaneous beers, The Veil Brewing Co. in Richmond and Reaver Beach in Virginia Beach. This approach is analog, almost pre-modern. “We’ve kind of gone back to how people were brewing a couple hundred years ago, except we understand the science of what’s going on. We understand the rules; it’s not purely trial and error,” Jennings says.

This age-old method is environmentally friendly as well, certainly for a brewery that produces 400 barrels annually. The whole process, unbelievably, is entirely wood-fired. Pen Druid uses organic red wheat from the nearby Farm at Sunnyside. The relationship is symbiotic: local farmers exchange wheat which, after fermentation, is then given back to the farmers to feed to their cattle. “Plus, we cut down on deliveries by using the stuff in our backyard,”Jennings adds. 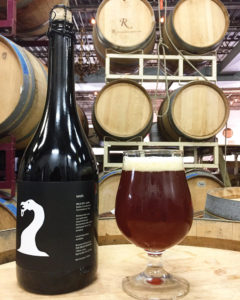 This holistic relation with the region stretches back generations for the Carneys. Their family history is, in fact, contained in the brewery’s name. A pen is a female swan, and a druid is an oak. Together they conjoin the family’s Irish coat of arms and the wilderness of the Piedmont while paying homage to their grandparents’ Rappahannock County farm, the original Pen Druid. The brewery’s logo, a swan with its beak pierced by an amulet, is silhouetted and rough-hewn, as though forged and hammered on the village blacksmith’s anvil centuries ago. The name, like the beer, encapsulates the landscape and the family’s relationship to it.

After all, the brewery is a family affair. In Pontiak, each brother contributes his musical expertise and dexterity with one instrument to create a harmony that is greater than the sum of each of the component parts. Similarly, with the brewery, each brother contributes his wisdom in different areas.  Jennings, with his unmistakable proclivity toward the conceptual, is infatuated with processes, whereas, “Van is the overall brain. I guess if this were a ship, he’d be steering it,” Jennings says. “Lain is incredibly technical. He built the bottler, installed the wiring for the glycol jacket and the plumbing. He’s a systems dude. We’re all very different, but in overall spirit we share the same ultimate goals.”

They work as a collaborative unit not just within the walls of Pen Druid, but also with other breweries. Last year they partnered with D.C.’s Right Proper Brewing Company, the Richmond outpost of Stone Brewing, and the Seattle-based experimental metal band Sun O))) to create a Nordic IPA called “Soused.” Aromatic and redolent with honey, mango, and juniper, the beer was a smashing success. Never ones to step into the same river twice, the brothers plan to release a sweet-and-sour beer infused with raw Rappahannock honey this spring. As you read this, check to see if it’s available: these limited-run specials draw imbibers from all over and supplies don’t last long.

The Brothers Carney take an unorthodox approach to all that they do, in music and in brewing. A trained ear can tease out influences in their music ranging from the primordial roar of Black Sabbath to the “Wall of Sound” technique Phil Spector pioneered in his happy-go-lucky soul and bubblegum pop of the 60s.  With the beer, identifying the influences and tracing the lineage is more difficult. When Jennings discusses Pen Druid’s beer, it’s as much about the liquid itself as it is the conceptual frameworks underlying the process. The brewery is a vision as much as a product, a collage of myriad impressions: beers drunk, songs heard, books read. Like the initial yeast foraging expedition, he sheds preconceptions and dives in with an open mind.

“I don’t see inspiration coming from any specific Muse,” he says. He goes on to paraphrase a section of David Abrams’ Spell of the Sensuous, a dense, multidisciplinary work that blends anthropology, philosophy, and Native American culture. Abrams correlates Apache moral fables to geographic landmarks in order to illustrate the deep interconnectivity between these tales and the natural world, a relationship between man and nature. The natural world finds its way into the beer where it can be consumed and appreciated by visitors to the brewery and thus to the surrounding landscape. “There’s a strange synesthesia. I’m taking this thing and metamorphosing it into taste.”

This synesthesia courses through the region like a river; it is the wellspring of the Piedmont and its inhabitants. The people are sent out into the world like ambassadors to explore, learn, taste, devour, behold. Then, when the time is right, they return home and bring with them all that they have learned, all that they can share with their community. “The community congeals around these people,” Jennings says. Through their travels, music, and curiosity, the Carneys turned Sperryville into a two-brewery, zero-stoplights town.

Bob Dylan plays over the speakers and fills the brewery’s tasting room with ambient song, echoing and reverberating throughout the minimalist chandeliers and salvaged-wood bar built by a local carpenter who just happens to be there at the same time as I am. “We just wanted to contribute something to the community,” Jennings says.