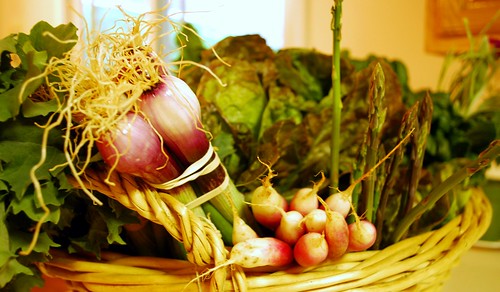 For many residents of the Piedmont, the fading of summer means the end of the CSA baskets we’ve come to anticipate every week during the growing season. Community-supported agriculture programs are a boon to local farms as well as the lucky recipients of organic veggies. Those who signed up with Graceland Farm received fascinating e-newsletters throughout the season. We were moved by John Wright’s musings on the “Final Delivery of the Season.” So we asked him if we could publish it here for our readers.

Thanks again to everyone for participating in our CSA this Summer and for helping to keep a little farm alive. Whether he raises crops and livestock on 80 acres or one; a dirty hat, leather boots and blue jeans are the trademarks of an American farmer. The traditional images of a red barn, cows grazing in a green field, miles of straight fences, rows of corn and a big flock of chickens in the barnyard is one version of farm life. Today, farmers raise free-range chickens for their eggs, grow vegetables to sell at the local farmer’s market or keep bees for honey sold at a road-side stand. Farming is changing a great deal, but the essence of farming – plowing, seeding, weeding, harvesting, feeding and caring for livestock — remains the same.

The machinery has modernized, but a farmer must still learn the same basic skills. Providing food for your family with some left over to sell locally is the goal. After decades of suburban developments and factory-farmed food, there is a growing demand for pasture raised, organic and locally produced food. Small farms around the country are being revived. The “new farmers” want to provide their family and community with healthy produce, dairy products and meat. There is growing concern about E-coli mad-cow disease, and bird flu and the introduction of hormones and antibiotics in meat, more cattle, sheep and poultry are being free ranged in pasture-based operations. Not only is the livestock meat not contaminated with unnecessary chemicals, but laboratory tests have proven that grass-fed beef and chickens produce more nutritious and lower-calorie meat and eggs.

So, I encourage all of you to continue to support local farmers and farms. There is a subtle network of dependence among all local farms. And the success or failure of one can have both a spiritual and actual effect on others. This year I grew about 900 tomato plants in a field in front of our house. It sits at an intersection of two main roads of our village and is heavily traveled. From the first day that this field was tilled curious passers-by would honk, wave or stop by to see what was going on. You see, a modern
tomato field is much different than growing traditional row crops. As I constructed my irrigation by running it through a drain pipe under Germantown road, I was met with skepticism and bemusement by my next-door neighbor. And, when I laid out my irrigation drip lines and black plastic mulch the owner of the local concrete plant stopped by to chat. He was curious about the engineering aspects of the project. Tomato plants were put in with support stakes and thousands of feet of twine. This brought
out the “real” farmers, who were trying to figure out just “What the heck are you trying to grow?” The reply “Heirloom tomatoes, actually organic Heirloom tomatoes, every color under the sun.” “What’s a hair loon tomato?”

Rarely could I enter this field without someone stopping by. I began to feel like Kevin Costner waiting for “Shoeless” Joe Jackson to appear from the corn of his “Field of Dreams” as I waited for my crazy tomatoes. Some visitors grew a little impatient waiting for the fruit. Many didn’t realize that tomato plants planted around Memorial Day won’t begin to produce fruit until the middle of July. But, when the tomatoes finally began to produce fruit the curiosity really grew. The landscaper working next-door, the preacher’s wife up the street, the contractor building a new home, another local small grower, the dairy farmers and the neighbors I had never met, all stopped by to add encouragement and satisfy their curiosity about all these strangely colored tomatoes. I sold them a few tomatoes, if they insisted on buying, and gave away quite a few more. And, for a fleeting Summer season broke out of the anonymity of quietly working a field of my produce.

Image Via Flickr/Vintage Victuals (check out the website for tasty recipes, too)