A gallerist and an artist have created a spectacular hilltop home and destination art venue.

Lyn and Russ Warren are always ready to welcome visitors to the gallery and studio annex.

The view from Les Yeux du Monde is itself almost like a work of art. A 360-degree Turner landscape, perhaps? Situated on a hilltop off Route 20, high above Charlottesville, the sweeping panorama takes in the city, the mountains, the wooded countryside, and offers an astounding spectacle when the sun sets behind the Blue Ridge to the west.

Combine these elements with a somewhat eccentric modernist house, plus a Cubist gallery-cum-studio building, and you’ve got an extraordinary venue for making and selling art. Lyn Bolen and Russ Warren do both from this lofty aerie.

Designed in in the early 1990s and completed in 1993, the house is in the modernist style, but with a distinct Mediterranean flavor that makes it appear part palazzo, part castle, and part monastery. Its character is at once imposing and appealing. A few yards away from the house on an open -entry courtyard stands the light-filled gallery-studio, a glass, steel, and concrete rectangle. The gallery-studio’s austerity is immediately offset by the warmth and intimacy of its exhibit space. 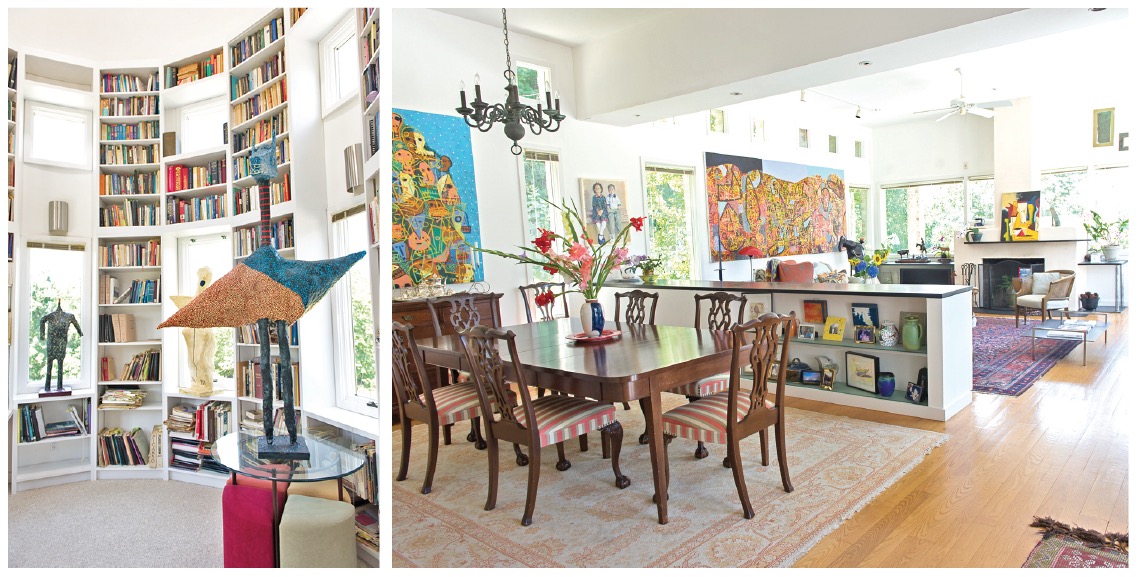 Left: The highly functional, 360-degree “silo” tower room has seen service as a children’s play and study area, an office, and a library/archive for the Lydia Gasman papers. Right: The airy and light-filled great room, an ideal and frequently used entertaining space, combines a living and dining area that opens onto the courtyard.

Lyn Bolen Warren established Les Yeux du Monde (“The Eyes of the World”) in the house in 1995 as a contemporary art gallery that featured both established and emerging artists from Italy, New York, and Boston, and later, primarily from central Virginia. She relocated the gallery to downtown Charlottesville in 1999, where it remained until 2009. Then it moved back home to occupy the purpose-built, gallery-studio next to the house.
The four-bedroom, three-and-a-half-bath home was designed by Charlottesville and New York architect Kate Nesbitt, who taught architecture at the University of Virginia. Lyn received her doctorate in art history from UVA in 1994 and greatly admired Nesbitt for her ability to combine her knowledge of architecture with theory and even dance, as Nesbitt was a dancer with Merce Cunningham before pursuing her graduate work at Yale.

W. G. Clark, a native of Louisa, and his associate, Josh Stastny, designed the building to accommodate Lyn’s gallery, where she mounts at least eight shows throughout the year, and Russ’s studio, where he paints, sculpts, and creates collages. Clark served as the design critic at the Harvard Graduate School of Design and later as the chairman of the architecture department at UVA. He has won countless awards and his projects are widely published. He was named twice by Time magazine as one of America’s best designers, and is a three-time recipient of the National Honor Award from the American Institute of Architects.

“I can’t emphasize enough how absolutely amazing they were to be able to translate our thoughts and dreams into realities even better than we could have expected,” Lyn says. “Architects are so important, and Kate Nesbitt and W. G. Clark really gave us huge gifts when they agreed to take these projects on. Their work continues to surprise and uplift us, while seamlessly adapting to our ever-changing needs.”

One of the design aspects of both projects discussed with the architects was a desire to conform to Thomas Jefferson’s sense of place, which Lyn felt was crucial. While it’s far from a typical Virginia farmhouse, there’s a horse barn and paddock nearby, and the house has a “silo” that echoes its rural setting. The silo, or tower, is what gives the house its exotic characteristic. The tower has served multiple functions including (formerly) a children’s play and study room, office space for Lyn, and the archives of the late Lydia Csató Gasman. Gasman was once a UVA art history professor, artist, and one of the world’s leading experts on the life and work of Pablo Picasso. She was also a mentor to Lyn, who now co-manages Gasman’s archives and estate. 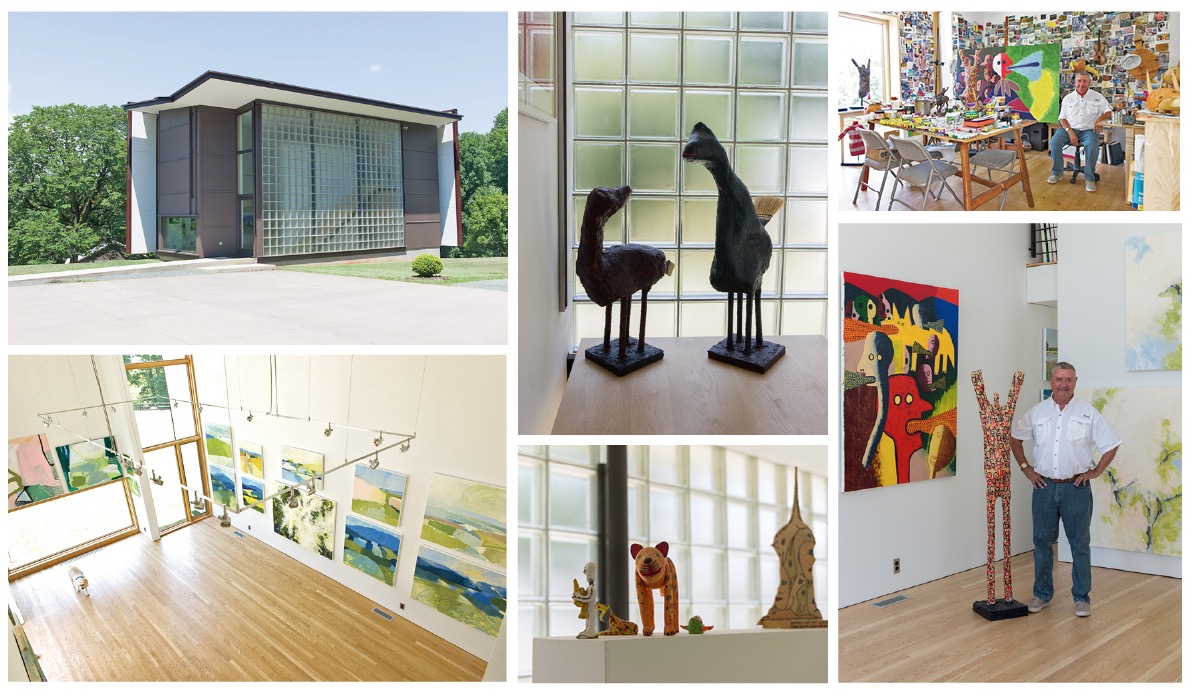 The rectangular gallery/studio is within a few steps of the house. The space occupies the first floor of the annex and provides ample space and light for viewing art. Russ Warren, surrounded by his sculpture, paintings, and world-class collection of postcards, presides over his studio loft, which takes up half of the second story.

“We now have Lydia’s books in the upstairs round-room, floor to ceiling,” Lyn says. “The room started as my office, but now it’s our ‘control room.’ We also have Russ’s sculpture perched on the bookshelves up there. Necessarily, the whole house has to be storage for art, too, but I’m not complaining!”

The great living-dining room on the ground floor of the L-shaped house wraps around another courtyard that brings the outside in through large windows on two sides. The space is conducive to entertaining, which is convenient for the gallery’s many openings, lectures, and attendance by their Collectors’ Club. Lyn and Russ strive “to raise the level of art awareness in Charlottesville.”

Across the way, the tri-level gallery-studio features and displays the work of artists­—both nationally known and regional. The excellent lighting, high ceilings, and window placement allow for striking shows that present the art to its best advantage.

The second level houses Russ’s studio, which would inspire even non-artistic types to take up the brush, or chisel, or whatever tools are needed to create Russ’s large, colorful, detailed canvasses and almost life-size sculptures that dominate the scene with wit and artistry. His work has been featured at the Venice Biennale and the Whitney Biennial and is kicking off Les Yeux du Monde’s fall season with a one-man exhibition.

W. G. Clark wrote, “Architecture, whether as a town or a building, is the reconciliation of ourselves with the natural land. At the necessary juncture of culture and place, architecture seeks not only the minimal ruin of landscape, but something more difficult: a replacement of what was lost with something that atones for that loss. In the best architecture, this replacement is through an intensification of the place, where it emerges no worse for human intervention, where culture’s shaping of the place to specific use results in a heightening of the beauty of the landscape. In these places, we seem worthy of existence.”

In designing the gallery-studio, Clark “really did accomplish that idea of replacement by using the corten steel on two sides that changed slowly from slate gray to the red color reminiscent of our red clay. And the glass block on the side that faces the house keeps the structure from taking over. … It all sort of blends in amazingly,” Lyn says.

Les Yeux du Monde—which Lyn so named because she hopes “to open people’s eyes” to the wonders and meaning of art—is a self-sufficient and welcoming setting that enriches visitors’ intellectual and spiritual lives while providing a world-class showcase for the visual arts.