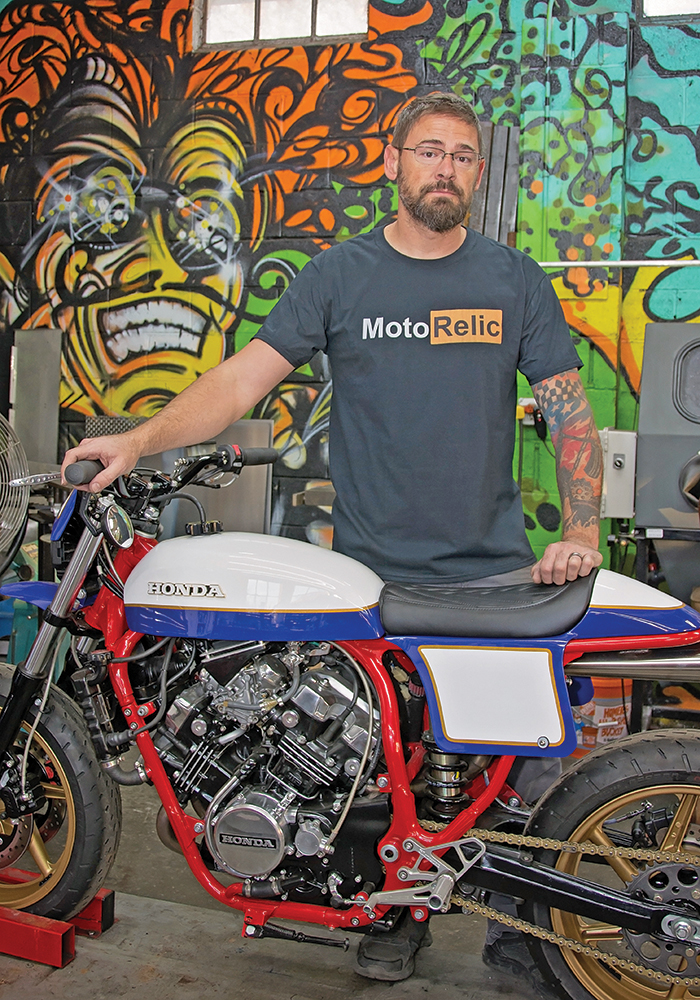 MotoRelic is based in a garage behind a house on a quiet street in the very small town of Hamilton. The custom motorcycle shop, not unlike Hamilton, is a bit of a trip back in time. Seventies-era motorcycles in front of bright, graffiti-style murals inspired by hot rod imagery from the ‘50s, surrounded by heavy, dull grey machining equipment from the ‘40s. At a glance, the newest thing in the shop is the proprietor, Sean Skinner.

Sean grew up around mini bikes, go karts, four-wheelers and motorcycles. “Toys with engines,” as he calls them, were always in the garage, and he loved to ride. When he was in high school, he raced cars going down the road while he was next to them in the field. “But I’m pretty sure none of them knew we were racing,” he added with a laugh. He rode his uncle’s Honda to get his street bike license and rode to school for a time, and raced bigger bikes at Summit Point for a few years.

He built his first custom motorcycle in 2007, and four years later, a Yamaha XS650 build was featured in Iron Horse Magazine. “That pretty much got me into building more and more,” Sean said. 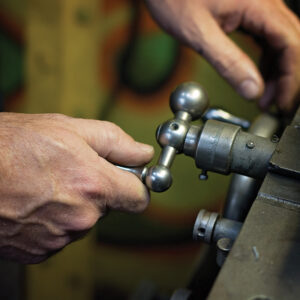 In 2014, Sean was working as an auto technician and hating it. “It was just eating at me,” he recalled. “I’d come home and rant to my wife about this and that.” He credits his wife for pushing him to do it full time. He quit his job, started MotoRelic, and has never looked back.

Customizing an older motorcycle requires mixing form with function, old with new, all while integrating the customer’s desires. “Getting the ‘bones’ of the original motorcycle to flow with the final look can get tricky,” he said. “Sometimes I can mold the new with the old fairly easily but sometimes the old has to be drastically changed.” This can mean cutting and reshaping the frame to fit the new design. Those visual lines of the bike must flow, but it’s equally critical to retain the geometry of a well-handling motorcycle intact.

Getting the mechanical and aesthetic parts right is the goal, but the reward is in the client’s reaction. One client had a 1977 Yamaha RD400 when he was younger that meant a great deal to him. He wasn’t local, and had to travel to see the bike’s progress. “When he came out to see it finally assembled, he couldn’t hold back the tears,” Sean said. “It’s very meaningful to me to see that type of emotion over something I have created for someone.”

Another client calls every now and then from Hawaii just to tell him how much he loves his recently finished bike, a 1979 Kawasaki that belonged to his deceased uncle. Sean talked while he scrolled through his phone looking for a photo, and landed on a shot of the custom KZ1000 parked in the midst of a gorgeous Hawaiian landscape. “It feels great to know that you are building a quality product that means so much to each person.”