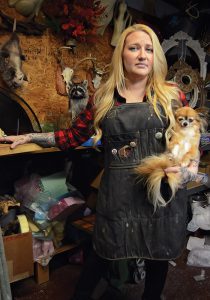 It’s not surprising that Shasta Donegan would find her calling in taxidermy. Always drawn to art, science, and animals, Shasta recalls being captivated by the displays that fill the halls of the Smithsonian’s Museum of Natural History. But brutal circumstances inside the walls of her childhood home led to her lifelong connection with animals. She escaped unpleasantness at home by retreating to her yard and surrounding woods, rarely spending time inside until it was too dark to see.

Living in a rural area, though, there were no neighborhood kids to play with. With the exception of a few cousins, her closest friends as a child were her pets. Her dog Clea, a black lab/golden retriever mix, used to walk Shasta and her sister to the bus in the morning. Then she would walk back home and stay in the yard all day, watching, waiting for them to get home. It’s easy to imagine the comfort Clea’s greeting must have brought the girls.

“I think that’s why I understand animals so well,” she said. “I can read animal body language just like a conversation.” To this day she is constantly taking in animals with troubled pasts who, in most cases, just need to be understood. Animals with so-called “behavioral problems” have thrived easily living with Shasta and her family. “With animals, you just have to look outside yourself and listen, they will tell you what they need,” she said.

An artist first, she had many years’ experience with a variety of media. She sold artwork here and there over the years, but struggled to find a way to make money using her natural talents and interests. Enter taxidermy, the merger of art, science, and animals she for which seemed to be destined. Classically trained in the trade, Shasta found that her art background enabled her to apply unique, innovative processes she had never seen anyone use before.

“There are two kinds of taxidermists,” Shasta says. “There is the craftsman who buys the products available and puts them together, and the artist who is constantly developing new ways to render the most lifelike taxidermy possible.” She has no issue with shops that have multiple employees and turn out much faster, less expensive work. “That’s just not me,” she said. Since she opened Silent Grove Taxidermy in 2011, she has never advertised. Even in deer-rich Loudoun County, where many taxidermists’ bread and butter are whitetail, she doesn’t take in many deer because it gets in the way of her favorite type of custom work. 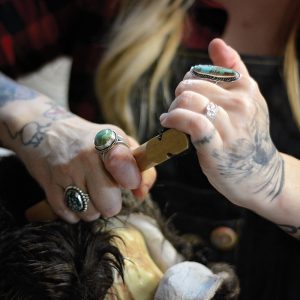 Rare or unusual animals for which there are no forms available, or those that require a great deal of custom sculpting, are the most rewarding to Shasta, and some of her favorite projects are large, baby animals. “I have several foals, a caribou calf, a Bactrian (two-hump) camel, and numerous other smaller babies I’ve collected over the years,” she said.

Shasta now happily lives and works in the same house she spent so much of her childhood avoiding. The ugliness and trauma long gone, the property now bustles with animals who appreciate her way of understanding them, a group she has come to collectively call “The Misfit Farm.” A fox, four cats, nine goats, two rabbits, a mini-horse, a couple dozen chickens and six dogs all thrive here. Shasta works at night, finding the most productive hours are those when the rest of the farm is asleep. Almost the rest of the house, that is.

While she works, no matter how late or how long, her favorite little dog Piper is there curled up in a basket on her work table, watching her. Comforting her.