A minor blending grape from Bordeaux finds a home as major player in Virginia.

Inky dark in color, aromas and flavors of violets, black cherry, and plum with hints of earth on the edges. Grippy tannins. Full-bodied. These are the signature characteristics of wine made from petit verdot grapes grown in the soils of Virginia’s Piedmont.

Named for the small size of its berries (translates to “little green one”), petit verdot may be best known as a minor blending grape in the Bordeaux region of southwest France.

As much as any grape variety cultivated for wine in the Commonwealth, this one has proven to be one of the most consistent in the vineyard and winery, earning it a home in the Piedmont as a serious stand-alone variety. 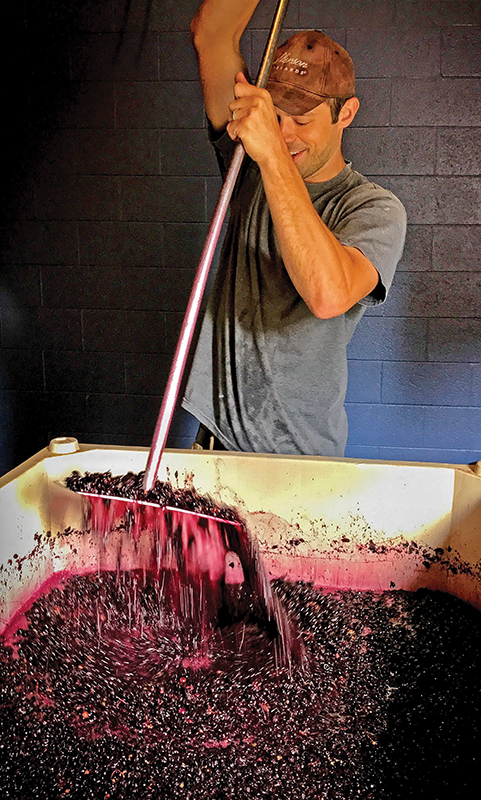 “The Punch Down” “When our red grapes are harvested, we destem them. What’s left are partially broken grapes that we put in a T-Bin (shown here). These grapes and grape bits are fermented in the T-Bin. The fermentation process brings these solids (grape skins, seeds, pulp) to the top, rising to the surface. This mass is called the ‘cap.’ We want to make sure we are consistently integrating this cap back into the wine. By doing this repeatedly we extract more color and flavor. The more often we do these punch downs the more likely we are to extract more dark color and tannic structure, especially with petit verdot which has an abundance of tannins and beautiful rich dark color. Punch downs take extraordinary effort. There are machines that can do this, but we do it all by hand — it’s a workout!”
— Attila Woodward, Jefferson Vineyards

With 205 acres planted (and 50 non-bearing acres) in vineyards across Virginia, petit verdot is the sixth most planted wine grape variety behind chardonnay, cabernet franc, merlot, cabernet sauvignon, and viognier.

This is a significant increase from the 80 petit verdot bearing acres that had been planted as of year-end 2007 (the first year plantings were tracked separately), a testament to the growing importance and popularity of wines made from the grape.

Dr. Tony Wolf, a professor of viticulture at Virginia Tech, was among the first to cultivate petit verdot in Virginia. Wolf and and his team planted the grape in vineyards at the Winchester Agricultural Research and Extension Center in 1991 and then at the Southern Piedmont Agricultural Research and Extension Center in Blackstone in 2005 to evaluate its potential.

The grape showed promise from the beginning. In a 1998 edition of Virginia Cooperative Extension’s Viticulture Notes, Dr. Wolf wrote that he was “consistently impressed with the relative cold hardiness of petit verdot.”

Cold hardiness coupled with more consistent ripening two of the characteristics that prompted many winegrowers to devote vineyard space and resources to petit verdot.

Wine pioneers Dennis Horton and Jim Law were among the first winegrowers to plant the varietal in Virginia.

Law first planted the promising grape in his Hardscrabble Vineyard at Linden in 1991. Like many winegrowers, he initially used it in red blends but soon recognized its potential as a stand-alone variety and bottled his first petit verdot wine in 2002.

Horton, founder of Horton Vineyards in Gordonsville, just north of Charlottesville, experimented with the bold, small-berried grape the same year. “There was a single, longish row at his Berry Hill Vineyard planted in 1991,” recalls Mike Heny, winemaker at Horton Vineyards.

“We had so many other promising varieties like touriga nacional, norton, cabernet franc, and tannat, we bulked out our petit verdot. Horton mostly watched from the sidelines,” says Heny. “In 2014, I worked with some petit verdot from the Silver Creek Vineyard and finally got what the buzz was all about. Wonderful texture and length, haunting aromas, engaging color. Since that time we have planted it at the Berry Hill vineyard and it looks promising.”

Luca Paschina, who has been the winemaker at Barboursville Vineyards since arriving in Virginia from his native Alba, Italy, in 1990, makes one of the state’s most elegant and balanced petit verdot wines.

“Seventeen vintages of growing petit verdot in three parcels with different slope and exposures has allowed us to accumulate a good understanding of this sometimes misunderstood and abused variety,” says Paschina.

“While some growers, seeking elegance, limit the yield and carefully select each cluster’s ripening stage, others allow for fairly high production of uneven ripening clusters, capable indeed of muscular dark wines but coarse and lacking elegance. One thing necessary for petit verdot to reveal its elegance is time, and from us, patience,” explains Paschina. 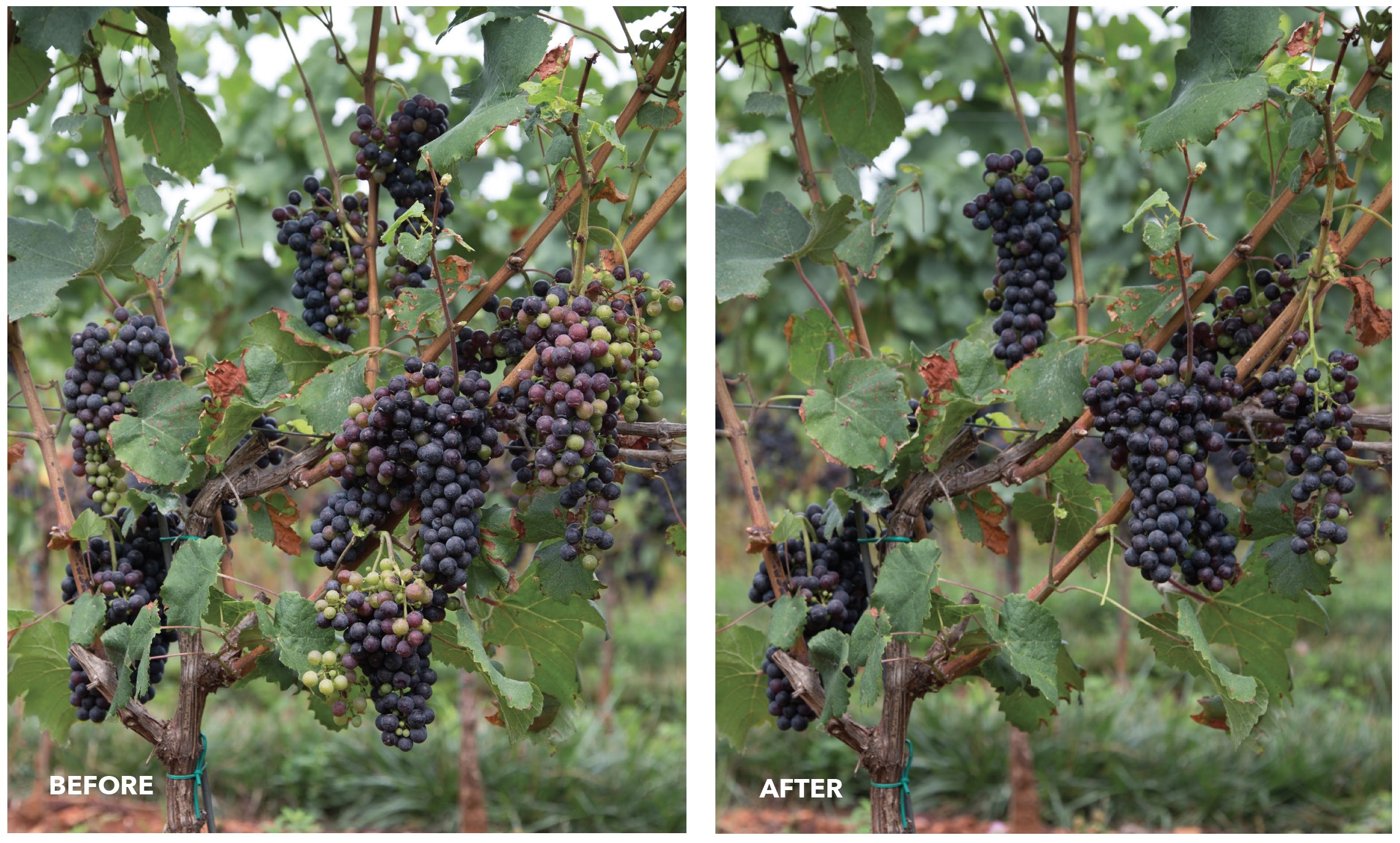 “Green harvesting”
The reduction of clusters per vine during the growing season is critical to ensuring petit verdot clusters ripen evenly. Before and after pictures of the same vine this August at Barboursville Vineyards portray the perfecting of the wine at this critical stage.

Jake Busching, who has been a winegrower and vineyard consultant for 20 vintages in Virginia says, “Petit verdot is a survivor and shows our terroir well. It performs like we need it to: later bud break, great cold hardiness, vigorous to get through to maturity, and a good crop load.”

In the rolling hills of Madison County, Scott Elliff has found success with the wine from this grape at his small artisanal winery, DuCard Vineyards. Elliff’s complex petit verdot, with loads of dark fruits and ample tannins, has been featured in several state and national forums as an example of what Virginia is capable of producing.

“We planted one acre of petit verdot in our estate vineyard in 2001 and it consistently provides a small quantity of distinctive, super-expressive fruit,” says Elliff.

“Initially, we used it to add aromatics and structure to our red blends but started bottling a varietal petit verdot a few years ago given its intensity and great violet, sage, and plum characteristics. Today we bottle about 100 cases of it each vintage, which typically sells out in a few months.”

Results of the 2017 Virginia Governor’s Cup, the most prestigious wine competition in the Commonwealth, may be an indicator of how petit verdot quality has improved in recent years and how it compares to other fine wines when tasted in a blind comparative setting.

Of the 494 Virginia wines entered in the 2017 competition, just 23 earned gold medals, five of which were petit verdot wines from the 2014 vintage. All five—from Ingleside Vineyards, Jefferson Vineyards, King Family Vineyards, Valley Roads Vineyards, and Veritas Vineyards & Winery—were among the 12 highest-scoring wines earning a spot in the coveted Governor’s Case.

The aromatic and complex 2014 Paul Shaffer 6th Edition Petit Verdot from Veritas Vineyards & Winery, based in the town of Afton, about 25 miles west of Charlottesville, scored one of the 12 spots in the Governor’s Case. With seven-and-a-half acres of petit verdot planted, Veritas has one of the largest plantings in the state.

“This 2014 vintage was one of the coolest I have had since 2009,” says Veritas winemaker Emily Pelton. “Cooler years are always my favorites, the basic acid structure is what allows petit verdot to age gorgeously.”

Charlottesville-based Jefferson Vineyards also earned a gold medal and spot in the 2017 Governor’s Case for their bold yet balanced, vanilla, earth, and dark berry-flavored 2014 petit verdot. The Woodward family, founders of Jefferson Vineyards, were among the earliest winegrowers to devote significant vineyard space to cultivating it.

“Small yet powerful, the tannins in the grape add a lot of structure and body. This serves as a great blending tool and is equally magnificent as a varietal on its own,” says Atilla Woodward, third-generation owner of Jefferson Vineyards.

Today, Woodward, along with winemaker Chris Ritzcovan, and their team, farm three-and-a-half acres of petit verdot that were planted in 1998, 2003, and 2010 in the estate vineyards at Jefferson Vineyards.

Of the 65 grapes cultivated for wine in Virginia, petit verdot is one of the most consistent in the vineyards and continues to show promise as a stand-alone variety. Virginia is one of the few regions where the varietal is widely available, presenting an opportunity for unique differentiation in the overcrowded fine-wine marketplace.