Fire trucks “Get into your Heart” 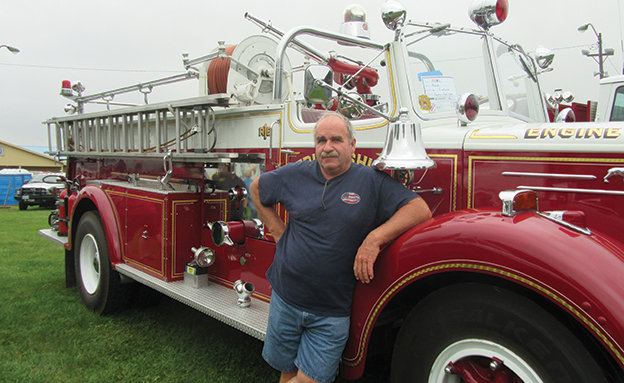 Rocky Keplinger is an expert at maintaining, repairing and restoring firetrucks. Here he shows off his 1982 Ford L-9000 firetruck. Courtesy of Old Dominion Historical Fire Society

Abeat-up, rose-red-and-gray metal bucket with a rounded bottom dangles from an iron hook at the Manassas Volunteer Fire Company Museum. In black capital letters, it bears the word, “F-I-R-E.” Because of its rounded bottom, it teeter-totters and spills its contents if you try to sit it upright. The bucket has this design to deter thefts, if a firefighter in 1941 should leave it unattended. It is one of hundreds of precious firefighting artifacts proudly displayed in the museum by the company, established in 1892.

There’s more: a 1940s breathing apparatus for surviving in a smoky building and several pre-siren-days alarms. In 1910, a firefighter stomped on a pedal on a 1909 Howe truck’s floorboard to sound a gong. How to catch victims jumping out of buildings afire? There’s a life net with a red bullseye dot onto which, ideally, the panicked jumper would safely plop. There’s also a Stokes basket, an elongated, chicken-wire-type “stretcher” for evacuating people. A mannequin sports a 1970s fire-resistant uniform made of nomex.

These are a few of the treasures of the museum and members of the Old Dominion Historical Fire Society (ODHFS), devotees who collect antique fire trucks and fire apparatus. 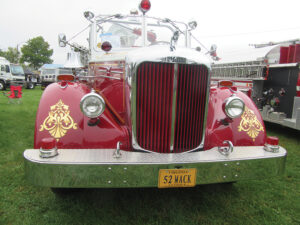 In non-pandemic times, firefighters, former firefighters, and fire apparatus buffs participate in over 200 events like the Berryville, Leesburg, and Purcellville Christmas parades, the Winchester Apple Blossom Festival, and “Pride and Polish Day” near Richmond. During the COVID-19 pandemic, members had drive-through events, like July 4th parades through towns as people applauded from their front yards.

They drive in fire truck rodeos, competitions in which drivers maneuver their shiny behemoths around orange cones and are timed for their efficiency and driving talent. 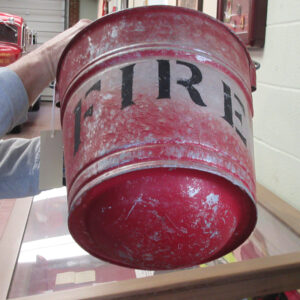 A 1941 bucket with a rounded bottom. Courtesy of Manassas Volunteer Fire Company Museum

Founded in 1978, ODHFS has around 300 members and collectors all over Virginia. The organization is a chapter of the Society for the Preservation and Appreciation of Antique Motor Fire Apparatus in America.

Tommy Herman, its president, is a retired Richmond firefighter whose start with one truck has mushroomed to 20 road-worthy rigs housed in a barn he has expanded twice. “Collecting fire trucks is a disease,” he chuckles. “My wife calls them my children.” One is a pre-Civil War, 1859, hand drawn, cream-colored beauty with fancy gold leafing and fine pinstriping.

Volunteer guides at the Manassas Volunteer Fire Company Museum gladly delineate the details unique to each of their four, antique fire trucks. The 1909 Howe has a 25-horsepower, gas motor to run the pump, but the truck was pulled by horses. Its predecessor trucks had hand pumps. Attached to it is the hose cart and hanging on the side a lantern for looking around inside buildings. 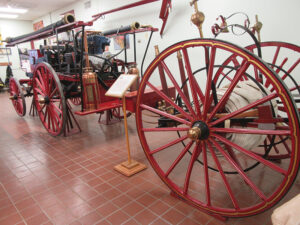 The 1909 Howe firetruck that was pulled by horses and had a hose cart. By Glenda C. Booth at the Manassas Volunteer Fire Company Museum

Gleaming nearby are two Buffalo Triple Combination pumpers, a 1929 and a 1947. The 1929 Buffalo, the first fully-motorized fire truck in Prince William County, has a 50-gallon water tank; the 1947 Buffalo, a 200-gallon tank. Today’s fire trucks typically can carry 750 gallons of water.

The pride of the Orange Volunteer Fire Company is a custom, 1931 truck made by the Seagrave Company of Columbus, Ohio. Of five made, this is the only survivor, but its future was once at risk. The fire company sold it to a museum that neglected it and left it in a scrap yard. In 1994, Dennis Moser of Wilkesboro, N.C., rescued and restored it. An Orange-area farmer, John Ellis, bought it and donated it to the county. 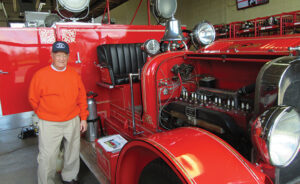 “It was so cold the driver had to pry his hands off the steering wheel,” said Lorris “Buckshot” Clements, an expert on the roofless 1931 custom-made
fire truck. By Glenda C. Booth at the Orange Volunteer Fire Company;

Lorris “Buckshot” Clements, who started as a volunteer firefighter in 1955, extols the truck’s virtues and history. The local fire chief, Dr. Roush, designed it for fire and rescue with a rectangular set of boxes that house five equipment compartments. It was unique at the time because it had an inside water tank with a portable pump that could draw water from ponds and creeks. Other trucks had chemical tanks. It has a starting crank, double clutch, 12 spark plugs (most then had six), dual ignition, and 90-horsepower motor that gave it a top speed of 45 miles per hour. Two men sat in the seat, two hung onto the back, unstrapped. It still has its original ladder, pike pole, stretcher, and lights. The truck was used for building fires, train wrecks, and airplane crashes and volunteers did first aid, too. With no roof, “It was so cold the driver had to pry his hands off the steering wheel,” said Clements.

Some enthusiasts, like Frank Hoppes, collect brush trucks, vehicles with a front-end spray bar for putting out fires in fields or forests. Hoppes first volunteered at age 16, served in the Flint Hill Volunteer Fire Company, and ran the Middleburg Volunteer Fire Department before becoming Middleburg’s Police Chief. He owns five trucks, including a 1973 Ford F-250a brush truck built by Stinebaugh which holds 200 gallons of water and is made of aluminum, unlike most that were steel. Why does he collect fire trucks? “I can preserve firetrucks or sit in a bar. Collecting fire trucks is not as dangerous.” 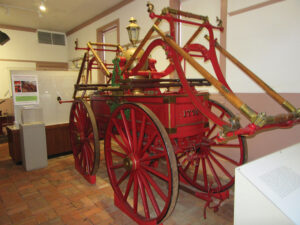 The 1909 Howe firetruck that was pulled by horses and had a hose cart. By Glenda C. Booth at the Manassas Volunteer Fire Company Museum

Chuck Malone, a Frederick County firefighting buff, quips, “A fire truck is a big squirt gun.” He restored the engine, water pump, fenders, and transmission of his 1951 Jeep brush truck, which holds five gallons of water. “Once you drive a firetruck it gets in your heart. I’ll always drive a truck.”

In the 1700s, people-powered bucket brigades put out fires, visitors are reminded at Alexandria’s Friendship Firehouse Museum. In fact, in the 1800s, Alexandrians were required to have a bucket in their homes. If an alarm sounded, everyone ran to the scene with their bucket and helped. They also filled water tanks in the first fire engines. 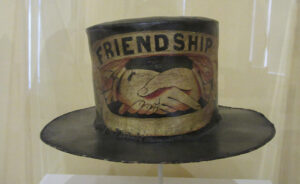 Locals established the Friendship Fire Company in 1774 and later four more companies. Today, the company’s building is a museum presented as in 1871, displaying a hand-pumped, suction engine built by John Rodgers in Baltimore that got water from wells and wooden hydrants. Its hoses were an innovative step up from the bucket brigades. John Muir, company secretary, described the vehicle as “the most substantial construction, having a mahogany box, balloon shaped vessel, levers and arms of best style and wheels of unusual strength, as best suited to a rapid movement over our rough streets – the whole constituting an engine of decided beauty and efficiency.” The museum also has an 1830 hand-cranked pumper with a rotary engine, dubbed the “Coffee Grinder.”

How to Buy a Fire Truck

Used fire trucks are the cheapest of any antique vehicle, notes Herman, adding, “Motorcycles sell for 20 times more than fire trucks.” A typical antique fire truck costs $2,000-3,000. “That’s a deal,” Herman maintains. Fire departments must dispose of old fire trucks and most go to junk yards where tires and engines are often saved, but the rest gets crushed. Today’s sales are mostly via the internet, for example, at government surplus auction sites like govdeals.com or on eBay. “You don’t have to be rich to own a historic fire truck,” offers Herman.

Share on FacebookShare on Twitter
« Sipping Back from the Pandemic
“Spring is Nature’s Way of Saying Let’s Party!” »