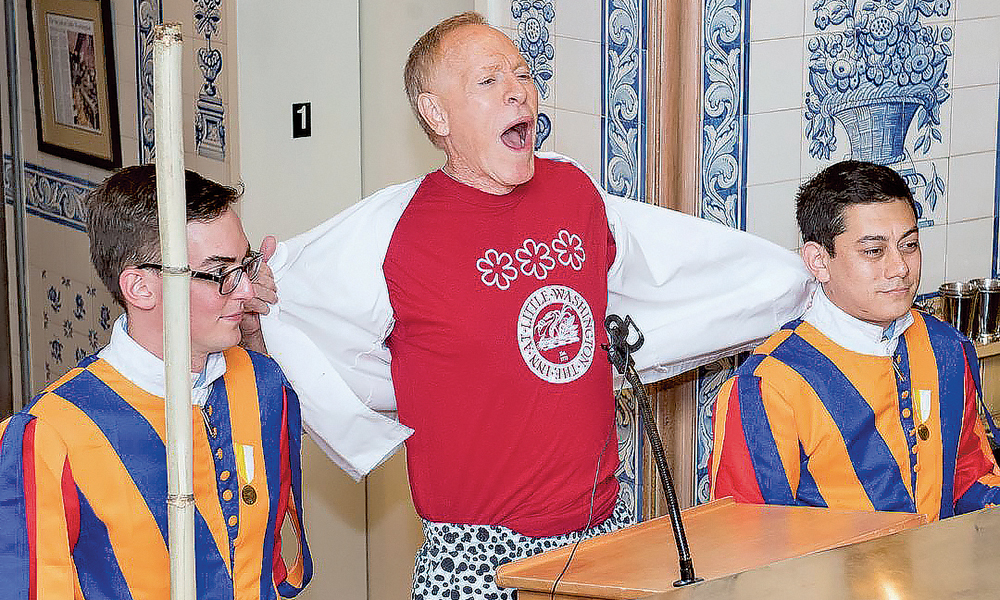 September was quite a month for The Inn at Little Washington’s Patrick O’Connell.

First, as part of the Inn’s 40th anniversary celebration, a tie-dye t-shirt-wearing O’Connell took the stage and emceed Innstock, a Woodstock-themed outdoor party that attracted more than a thousand guests to the town of Washington, which usually has about 130 residents.

Less than two weeks later, the renowned chef and proprietor received tremendous word that the Inn joins an elite club of restaurants worldwide recognized with the Michelin Guide’s highest rating — three stars, the first and only restaurant in the national capital region to achieve the prized honor.

Then Hollywood called, so to speak, with NBC revealing that “The Inn Crowd,” a working name for a sitcom comedy based on O’Connell and his former partner Reinhardt Lynch, is in development with Jim Parsons as executive producer. Parsons stars in the popular series “Big Bang Theory,” now in its 12th and final season.

While no release date has been announced, Deadline Hollywood is reporting that the primetime series will be based on a 1999 New Yorker article, also titled “The Inn Crowd,” penned by Pulitzer Prize-winning journalist Tony Horwitz and centered “around a gay couple who divide a small town when they open a very successful inn.”

Asked about the sitcom during an interview on the Michelin honors, a seemingly none-too-pleased O’Connell said: “We haven’t flushed that out yet.” He then added: “I’m somewhat concerned that NBC is moving ahead without any [prior] arrangement [with the Inn]. That’s being discussed with the lawyers.”

O’Connell, on the other hand, was pleased to disclose that PBS is currently working on a “six part series” about the Inn, which he made a point of saying was filmed “with our complete consensus, approval and participation.”

“The first segment is being edited right now,” he said. “I’m not sure if there is an air date, but it’s quite a fascinating story.”

As for the rare Michelin recognition, the innkeeper equated it to the highest honor in the hospitality sector.

“In our industry this is like winning the Olympic gold medal, the Nobel Peace Prize, and the lottery all rolled into one. There’s nothing comparable for us,” he said. “It’s a minor miracle.”

Since the Michelin announcement of Sept. 13, O’Connell said he’s been fielding congratulatory phone calls from seemingly “every country in the world,” including from fellow three-star establishments “welcoming us to the club.”

O’Connell sees the Michelin designation as a “big boost,” not only for the Inn, but for Rappahannock County as a whole. He drew attention to globetrotters who “travel solely by the Michelin Guide — from China, Japan, South Korea, Canada, and Saudi Arabia.”

“It’s a rarity when a place receives a Michelin third star, and people put it on their bucket lists and plan a trip around it,” he explained. “One of the most exciting things for our region — our town, our county, and even state — is this designation gives it a cachet it never had before . . . Everyone stands to benefit.”

Michelin’s starred system denotes restaurants that are worth a stop (one star), a detour (two stars) or a special journey (three stars), rating such worthy establishments in 30 countries and on four continents.

Michael Ellis, international director of the Michelin Guide, said in a statement: “This is a wonderful distinction for the Inn at Little Washington, which celebrated its 40th anniversary earlier this year. Over several visits, our inspectors were most impressed by the balance of creative, chef-driven cuisine and impeccable technique from chef O’Connell.”

The chef said that it’s onward and upward for his Inn and its staff of 150, that nobody will be resting on their laurels.

“We’ve polished the performance a great deal this year above what it was last year,” he said. “We’ve developed a stronger team spirit than I ever imagined we could have here.”

In the kitchen alone, he said, “we [created] three new dishes yesterday that are going on the menu tonight.”