What does it mean?

Is a wine from a Virginia Farm Winery?

The minimum requirement for a wine to be labeled as from a Virginia farm winery is that at least 51 percent of the grapes come from land owned or leased by the named winery.

Some limited trading of grapes between wineries is allowed, for blending purposes primarily.  For many smaller and older, stable production wineries the figure is at or near 100 percent, with all of it farmed by the winery and mostly at on-site locations.

A handful of mostly larger wineries operate under a different classification, with their requirement being that 75 percent of the grapes must come from Virginia (as below), but none necessarily being grown by them, on a farm.

Traditionally, leasing meant off-site land that the winery farmed and controlled, but it sometimes is being used just as a mechanism for the winery to buy the fruit from that leased property, without actually farming it.

Location of leased land and extent of involvement by the named winery is not indicated on the label, though it is sometimes included in describing the wine to customers at the tasting room. 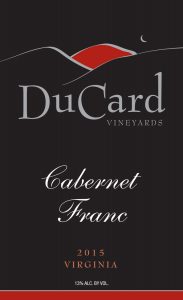 A label reading Virginia or Virginia White (or Red) Wine means at least 75 percent of the grapes were grown in the Commonwealth.

XYZ Vineyards and Winery:  This is the “brand” for the winery, operating the tasting room that is selling the wine.  The specifics of who grew the grapes and made the wine are on the back label.

The specifics of who grew the grapes and made the wine are on the back label. 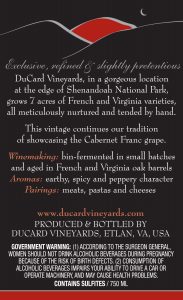 If the town listed is where the winery is located, then the wine was made by someone else, bought as bulk wine from them and bottled (and potentially processed slightly and/or aged) by the named winery.

If the town listed is not where the winery is actually located, then both the winemaking and bottling have been contracted out to others – regardless of the “brand name” printed on the front.

Produced and Bottled By … : “Produced” is the term for making (fermenting) the wine, and the winery name and location indicate who did it and where. This is the most common designation and represents the traditional situation where the winemaking and bottling were done on-site.  Frequently, all or most of the grapes also come from the winery’s property, but not necessarily as the winery could make (and bottle) the wine using purchased grapes.

As above, if the town located is not where the winery is actually located, then the winemaking and bottling have been contracted out to others (using grapes from any source) and the winery has put its “brand name” on the finished wine. If the grapes were grown by the winery, this is commonly called a ‘custom crush’ arrangement and the ‘winery’ technically qualifies technically as a winery, but does not operate as such.

A variant, “Produced and Bottled By Winery A, Location A for Winery B, Location B” is occasionally used to help make clear the situation where a custom crush operator makes the wine and provides it to the named winery for it to sell under its own brand name.  While, or maybe because, this has the greatest ‘transparency’ it is rarely used.

Grown, Produced and Bottled By … :  This is the “purest” situation, and means that 100% of the grapes were grown by the named winery, in the town named, with winemaking and bottling done on-site.  Some wineries who qualify for this phrasing use the Produced and Bottled By designation above, as a convenience so that they don’t have to change the label wording and print new back labels if they happen to use some off-site grapes in some years.

Estate Grown – on the front label:  Winery is located in a designated American Viticulture Area (AVA) and nearly all the grapes were grown on the named winery’s property, in the town named.  Usually this is used together with Grown, Produced and Bottled By on the back, meaning winemaking and bottling were also done on site.

The AVA name (‘Monticello,’ ‘Shenandoah Valley’ etc.) is usually included on the front of the label, and its inclusion means that virtually all of the grapes come from that AVA region.

In other parts of the world and much of the US, designated areas are tightly defined and connote specific grapes and wine styles.  In Virginia, they are broader geographic areas with more diversity of grapes and wine styles and quality, and are to a significant degree more ‘marketing’ and ‘political’ designations.

Anyone who has read all the way to here needs and deserves a glass of wine!