The Music of Andre Fox 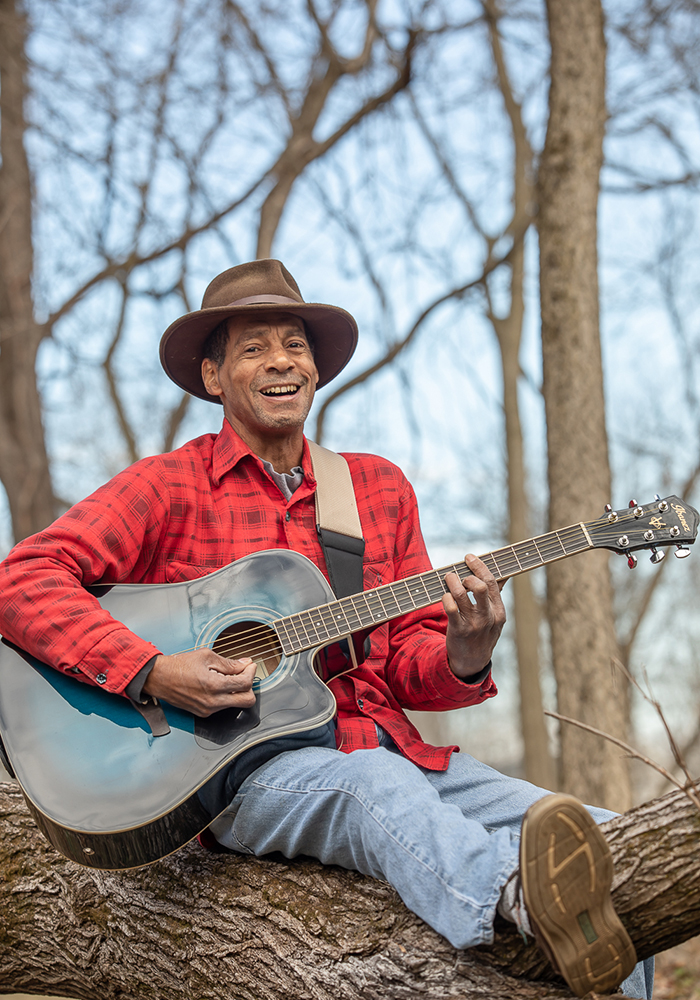 This, from one of the most well-known musicians in the northern Virginia Piedmont. But he is also one of those people who everybody knows and likes, so I guess he scores on both sides.

Andre has lived in this area all his life and is just one of those people who knows just about everyone. I had previously seen him play in local bars back in the ’90s. We met at the Red Horse Tavern in Middleburg to talk and reminisce. At the beginning of the interview, I remarked to him, “Gosh, I remember when this restaurant was Magpie’s,” and he said, “Girl, I remember when this was a house. Guy who lived here had a trained pet raccoon that rode around on his shoulder and did tricks.”

Born and raised to a family rooted for many generations in Fauquier and Loudoun Counties, Andre has led an eventful life working in the military and in the private sector. He’s traveled all over the world, but now his love of the local area and its people keeps him here. He feels his purpose now is to bring joy into people’s lives with his music, which he views as a gift. He treats his musical talent as a responsibility that he takes very seriously, and locals and fans who have known him many years continue to love and appreciate it.

When did you start singing?

Andre Fox: Music was always around while I was growing up. My whole family sang. We had a whole stack of 45s, like James Brown, old Smokey Robinson, the Temptations. We’d listen to those, and then somebody would jump on the piano, and someone would start singing, and everybody just sang and had a great time. I thought it was normal. I thought everybody could play and sing.

I came out of the womb singing. I’ll tell you a good story. One day I was folding clothes and a commercial came on the TV, and I heard “At last…my love…has come along.” It was the most beautiful song I’d ever heard. I actually dropped the clothes. I found out that the song was by Etta James, and I bought the tape and I learned it. Then, one night I played it at Mosby’s, and my mom walked into the club. She said, “When did you learn that song?”, and I said, “About two weeks ago, mom. It’s the most beautiful thing I’ve ever heard in my life.” Then she said, “You should remember it. I sang that song the whole time I was pregnant with you!” 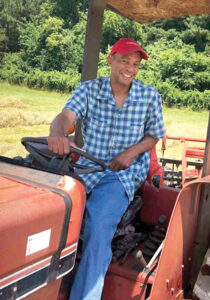 I understand that your family has deep roots in Fauquier County and Middleburg?

My family’s been here forever. Some of my family were born slaves, some of my family came over from England through Ellis Island. So I’m white and I’m Black and I’m Native American. But I don’t identify with any specific race or group. I was born and raised here. I’m an American, period.

My mom and dad still live here. My mom, she’s like Wonder Woman. She takes care of everyone and everything, and she works harder than you and I could ever work combined. And my father is like Superman. My grandfather helped take care of the Kennedy’s horses and taught Caroline how to ride at Glen Ora. My grandmother was the housekeeper, and the Kennedys left them some memorabilia when they moved out of Wexford.

So you’ve lived around here your whole life?

I grew up right here in northern Fauquier County and Middleburg. My whole family was into horse training over at the training center. I was on a horse when I was three. For elementary school, I went to Bannaker in St. Louis (Va.), because that was during segregation. When that ended, I bounced around different schools in Fauquier until I ended up graduating from Fauquier High in 1978.

So I have a lot of ties to this area. I love it here. I’m a country boy at heart. I was a member of the Future Farmers of America, and one of my favorite teachers at school was Mr. Yowell, who taught us how to fix lawn mowers and tractors and stuff. That’s where I got my love of mechanics. I still do a happy dance when I get the lights on a broken lawnmower to turn on. Gotta do a happy dance.

So was becoming a professional musician your goal when you were young?

No. After high school I joined the Navy as an electronics technician. That’s where I learned all my electronics. Then I worked on Capitol Hill in virtually every government agency that exists, because I had top secret security clearance. So I worked for CIA, DEA, FBI, IRS, Department of Commerce, the State Department executive offices. When I left that job, in 1984, I had to clear my mind so I came back to the farm. I just wanted a weed eater and a lawnmower and some horses for a minute. Then I got a job as an electrical mechanic at Metro, and I fixed the trains. From the front to the back, I worked on every part of the train. I did that for 10 years, then one day, I said, that’s it. 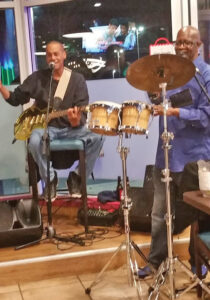 At Velocity 5 in Centerville with Thomas Thompson from New Orleans. “We were in the Navy together and somehow we ran into each other and still perform together like brothers.” 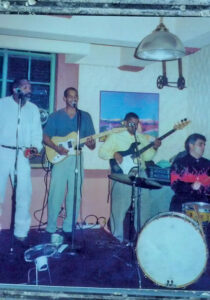 The Andre Fox band at the Alamo in Old town Alexandria. We were the house band and had a huge following. 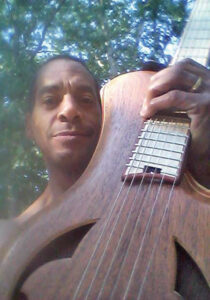 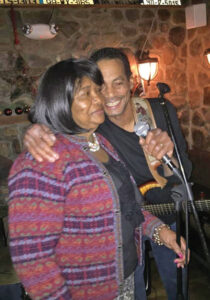 With a fan, Ms. Gertie Thomas, on her birthday at the Blackthorne Inn in Upperville.

What did you do then?

I picked up my guitar and I said, “I’m not doing it any more!” I walked away from society. I figured I could help more people with my guitar than I could with anything else. I took my guitar and I stood on the street corner in Old Town Alexandria. And I sang for everybody. That didn’t last two weeks until somebody said, you’re hired. My first gig was at the Alamo at Union and First Street in Alexandria. That was my first solid gig where I got booked every week and got a regular paycheck. I had a great time at the Alamo. I played the Apollo, too, and that was a great experience. I still have my paycheck stub from them.

How would you describe your music?

I describe my style as acoustic soul, but I do still love the old time rock ’n roll. My music sounds like old 1960s soul music, like Otis Redding. It sounds like it was written 30 or 40 years ago.

Who has been important to you as a mentor with your music?

I’ve played with some very very talented musicians. It’s so hard to start naming them because I don’t want to leave anybody out. The main person I’d like to mention is Gary Smallwood. He’s been a great influence in my life. And also my uncle, Brian Fox. He got me started performing in his gospel group, the Middleburg Harmonizers, when I was young. He really taught us the joy of music. I don’t even know if I’d be doing this right now if it weren’t for those two. And here I am, 26 years later, at 60 years old. So, it’s pretty cool. 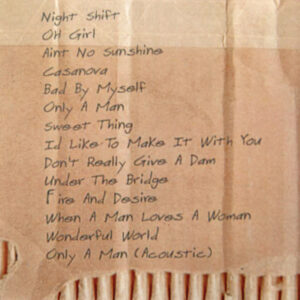 Andre last released an album in 2018, and due to high demand, all his albums are sold out at this time. 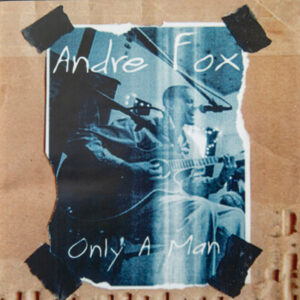 How do you feel about your music?

You can do anything with music: you can reach people’s souls; make them cry, laugh. It is the universal language, it crosses all color barriers, races, everything. Music is a very powerful tool and I use it very carefully. I appreciate the talent that I’ve been given, I don’t abuse it, I respect it and I respect its power. I use that tool to bring joy. I just want to make people happy. That’s my job right now. It’s a pretty cool job, it’s the hardest job I’ve ever had in my life, but it’s the most fun. That’s what God gave me, and that’s what I have to use.

Yes, you’re right, it’s my responsibility. You nailed it; you just taught me something about myself. Thank you. I feel good about my music and what I’ve done. I’ve had people come up to me and say, “I proposed to my wife at your gig. Would you play at our wedding?” or, “If it wasn’t for your music, we wouldn’t be married these 20 years later.” That’s pretty deep right there. I’ve played at a lot of weddings.

I think music is a beautiful tool. It’s more beautiful than any wrench or any pair of pliers I’ve ever seen. But when I think about helping people, the pliers and the wrenches are also tools in my toolbox that I can use. I can reach people with my music, but I can also help them if they’re broken down on the side of the road. That’s all that guitar is — a tool. But if you break down on the side of the road, that guitar ain’t gonna fix anything. But those wrenches can. I can use that knowledge also to reach out to anybody I can help.

What are you up to these days?

Right now I’m living in Centreville, taking care of my mother-in-law. She’s actually my ex-wife’s mother, but she’s family to me, and she has dementia. And she loves me; she won’t let nobody take care of her but me. I don’t want her to go to a nursing home, I’m going to stay there with her in her own home until it’s absolutely out of my control. Some days it’s hard, really hard, but some days it’s hilarious. She’ll do something like throw a chair out the window because she thinks someone is sitting there, and then she’ll say, “There, I got rid of them.” I really love her. I love that woman.

What about your music?

I’m not performing, I’m basically writing music now, because of the virus. I do both the music and the lyrics for all the songs, and people love it and they are buying it. I can deal with that. I’d much rather be out there playing it and singing it for people, but if I can still have my music and sell it and not have to go everywhere, that’s what I’m doing right now.