Erin Scala shares her knowledge and love for good (local!) wine at Fleurie 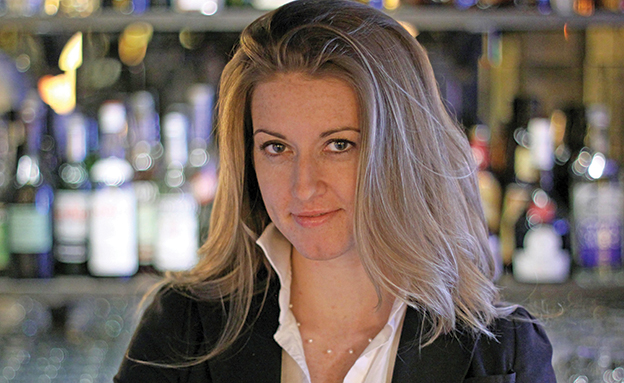 From vine to bottle to glass, Erin Scala lives a life devoted to understanding and interpreting wine.

The Virginia wine world is not just about people who produce wine, it’s also about the people who help guide us to consume local wines. In that regard, we’re lucky not just to have great Virginia wine producers, but some incredibly knowledgeable people who know how to present Virginia wines to the wider world. Foremost among them is my favorite sommelier on the planet. As Virginians, we are most fortunate that she is working in our Commonwealth.

Here’s how I discovered Erin Scala. About four years ago, I came upon a wine podcast for nerds and professionals called I’ll Drink to That. The easy-going, yet vastly-knowledgeable host is a wine guy in New York named Levi Dalton. The segments are in-depth interviews with a stunning list of guests, the wine world equivalent of rock stars. Episodes usually clock in at 60 minutes, so it requires more than a casual interest. There is a large and devoted following, both in the States and across the pond. Another feature is the engaging educational “warmup” segments by Erin Scala. In a 2013 episode, Levi interviewed Erin, who was then a popular sommelier in New York, garnering lots of press. She was already blogging, and was featured on Wine Enthusiast magazine’s “40 under 40” covers. Late last year, a young sommelier from Charlottesville came into the restaurant where I work. From our conversation, I was thrilled to learn from him that Ms. Scala now resides in the Old Dominion. She is beverage director at Fleurie Restaurant. A visit to Charlottesville became a priority.

My first meeting did not disappoint. Erin is the consummate restaurant professional. She exudes genuine warmth, enthusiasm, and hospitality while she uses her breadth and depth of knowledge to produce the best experience for her guests. I was amazed to learn she doesn’t print the wines for her menu pairings! She pairs wines with the food and the guest, an extraordinary concept that illustrates the degree of her expertise. Fluerie’s excellent wine list features many Virginia wines, all of which are in boldface type on the page. On my first visit, she paired the Ankida Ridge Pinot Noir with my mushroom tart. This wine changed my conception of what’s possible for Virginia wine. I’m convinced she knew that would happen. In addition to working at Fleurie and its sister spot, Petit Pois, blogging, and podcasts, she also writes a regular wine column for C’Ville Weekly magazine. She has hosted an entire in-depth episode of I’ll Drink to That with Virginia wine makers.

I caught up with Erin on a beautiful late fall afternoon for a roof deck tête-à-tête. We met at Common House in Charlottesville, a membership club just off the downtown mall. She was a consultant on the wine list. I also was able to meet her husband, Joe, who is the general manager. At the end of our day, I also met their impossibly adorable daughter, Valentina. Erin is delighted her daughter was born in 2015, a stellar vintage. I had previously learned Erin was actually from Virginia, and I was curious about the full circle journey to New York success and return to the Commonwealth.

“When did you return to Virginia?” I asked. “We drove down in a March blizzard in 2014, I was following the moving truck in a car,” she replied. She added, “It was the first time I’d driven stick shift. We ended up ditching the car, and I had to climb over boxes to pick the bottles of wine I wanted to save from freezing in the truck.” A uniquely unpleasant sommelier situation, to be sure.

Perhaps most interesting was the response about an impetus for the return to Virginia: “We wanted our own business. The entry to market in New York is prohibitive due to rent costs.” She added, “You plan on a four-year run. In Charlottesville, good restaurants are more long-lived, and you can have a really meaningful impact on the community.” She also admits bringing a stroller on the New York subway was less than appealing.

I was also curious on what career impact the “40 under 40” cover story from a major wine publication had. “It’s great advertising for the restaurant, and for me it’s all about the wine and the wine list. I’m focused on bringing more people into the restaurant for the wines.” she explained. She is proud of a recent feature on her wine list highlighting Petit Manseng. This is a white grape native to southwest France that is used for wonderful examples of both sweet and dry wines. It has turned heads and won awards in the past few years in our state. We both share the feeling that this varietal has potential to become a major player on the world stage for Virginia wine. The varietal has wide spaces between berries on the cluster, making it naturally resistant to mold and mildew. Even in our moist climate, it requires little to no chemical remedies. Erin has collected dry and sweet versions from France and Virginia on her wine list. It is an effort I certainly applaud.

She summed up a general question about Virginia wine with an answer that truly warmed my heart: “Sommeliers in this state have an opportunity to shape this emerging wine region by zeroing in on the numerous high-quality producers and their stories. We present them to a wider audience, especially when the wine lists are online.” She also informed me that the state’s investment in wine tourism has had great impact on the Monticello region.

Erin also blind-judges several county and local competitions. “I take notes on the wines, and then ask the judges who made my favorites. It’s a great opportunity to discover new producers to add to my interest pool.” I saw her present a riveting panel discussion on expanding the market for Virginia wine at the Virginia Wine Summit. “I present when they ask me,” she said. This is a typically modest response from the lovely Ms.Scala. Let me say, she has been invited to present the last three years running, and I hope next year.

Asked about the direction of Virginia wine, she shared this: “In my dream world, winemakers would focus on more sustainability in farming and labor (see the aforementioned Petit Manseng). I’d also love to see an integration with local wine and local food.” She again struck a chord with this sheep farmer (me), when she said, “People undervalue local proteins. They’re willing to pay for quality local wine, but reluctant to pay for quality local food.” I can’t argue with that.

She would love to see Virginia’s Alcoholic Beverage Control Board and legislature embrace this concept. Is there anyone who disagrees? Winemakers in Europe are able to produce a spirit product from the residue of winemaking. This isn’t legal here. It’s also impossible to have a truly high-end cocktail program in Virginia due to the limiting ABC laws. For evidence of this, just look at the vast selection of craft liquors and amaros available in Washington, D.C., that we can’t get here. While she laments the restrictive liquor laws in our state, Erin informed me, “We do have great access to good wine here. We don’t have to fight for the limited allocations (from abroad).” That prompts the question of why we can’t have both in a supposedly small-government state.

I asked Erin about Lovingston vineyard. The Vroomans from Ankida Ridge had mentioned them as a Virginia winery they really like. She echoed the admiration for the producer, who I added to my list of future visits to make.

I encourage everyone to visit Fleurie in Charlottesville and experience the talents of Erin Scala in person. Also, follow her blog at www.thinking-drinking.com/. And if you’re a serious wine geek, listen to http://illdrinktothatpod.com/. Hoping you’re drinking well in the new year. Cheers!

As of publishing time, Erin Scala has left Fleurie restaurant and opened her own wine shop, In Vino Veritas, in Keswick, Virginia. In Vino Veritas was recently mentioned in the New York Times food section.

Keith Miller is a certified French Wine Scholar, certified Specialist of Wine, and certified sommelier.  He works with the wine team at a five-star, five-diamond restaurant, and grows animals and vegetables on Touchstone Farm in Amissville.