Chestnuts are making a comeback in the Piedmont 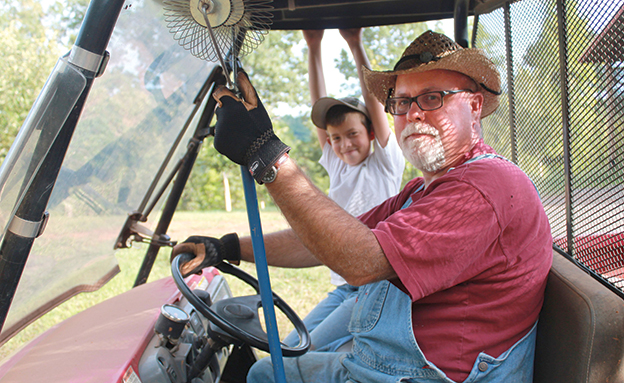 David and his son head out to collect chestnuts

With a 30-year career in software development, David also runs Oak Tree Systems, Inc., a software business, which, for now, “…finances my foray into agriculture,” he says, noting, “Farming is a romantic notion.”

But growing chestnut trees wasn’t all about economics. David yearned to return to his farming roots in Nelson County and the couple wanted a product they could manage in their senior years in the rustic countryside, a product without boom-and-bust cycles. They had to take the long view. It takes a chestnut tree around seven years to begin producing marketable chestnuts and with upfront costs around $20 just to plant the tree, the return on investment is delayed. Once through the initial growing period, a tree can produce nuts for 45 years.

The Bryants moved to Nelson, near Faber, in 2000, bought the 46-acre Black Oak Farm in 2002, and started planting an American-Chinese hybrid tree in 2008. After enduring some harsh weather and harmful cicadas, in 2015 they had their first significant, marketable crop. They expect to reach production yields of more than 200,000 pounds a year within in 10 years.

Black Oak Farm is tucked away east of US 29, 10 twisty, up-and-down miles to the top of a sunny knoll where 1,600 Dunstan, wind-pollinated chestnut trees are everywhere reaching for the sun. Their trees, from Florida, are 95 percent American and five percent Chinese, and believed to be blight resistant. One tree can grow as high as 45 feet. The farm has “23 acres in nuts,” David says.

In late May, the trees start to blossom and soon are covered with blooms. In the fall, the trees are laden with prickly, green, tennis-ball-size husks, like big, green gumballs. Inside are the dark brown nuggets, the crème de la crème of the nut world, some maintain. From the end of September through the end of October, the husks half-open and inside usually are three chestnuts per husk. The mature chestnuts, about the size of a quarter or one inch across, fall to the ground. Eighty percent fall within two weeks of ripening, with the last ones coming down around Halloween.

“September and October are two killer months,” David explains. He, Kim, and one employee collect the chestnuts with a machine and a football-shaped hand tool called the “nut wizard.” Beating the deer and other critters to acres and acres of fallen chestnuts blanketing the ground becomes a frantic, exhausting challenge. The Bryants now harvest about 20 pounds per tree. In 20 years, they expect to get 50 to 100 pounds per tree. “By the end of the season, I feel like a diabetic I’ve been pricked so many times,” David quipped, “but we’re big believers in it.”

To cure the chestnuts, they do not peel them, but soak them in stainless steel drums in their barn for seven days, a European method. Curing makes them less starchy, converts starches to sugar, and brings out the sweetness, leaving the nuts still firm and crisp. 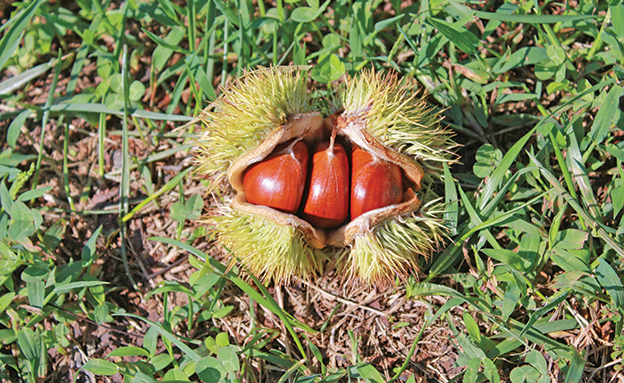 In early fall, there are usually three chestnuts inside each husk when they open 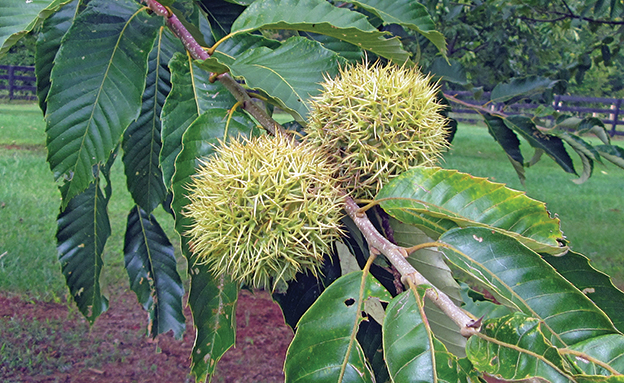 Before ripening and opening, chestnuts are encased in a prickly, green husk

Most Americans have never tasted a chestnut, David points out, so marketing these tasty nuggets is a challenge. Or another way to look at it is, there’s a big market out there. While Asian Americans consume two pounds a year per capita—they’re a staple in the diet in China, Japan, and Korea – chestnuts are a specialty product for Americans. Ninety percent of chestnuts sold in American groceries are from Italy, France, and China. Mostly, the Bryants sell to distributors like the Food Hub in Charlottesville, which services Virginia and Washington, D.C.

Imported chestnuts are typically three to four weeks past their peak of freshness, so “buying American” means getting fresher chestnuts.

Chestnuts are tasty roasted over an open fire, as Nat King Cole crooned. “They are charming to roast,” touts David, in the oven or on an outdoor grill and they get a smoky taste. You should slit the skin first to let the water out so you won’t have an “exploding nut,” he cautions. And he adds, they are gluten and cholesterol free.

Like a legume, the more you cook the white meat the softer it gets, like a puréed potato. Once peeled, they are a creamy white-yellow color akin to a potato. The company’s website offers three ways to cook chestnuts and a recipe for Marron Glacés, candied chestnuts. 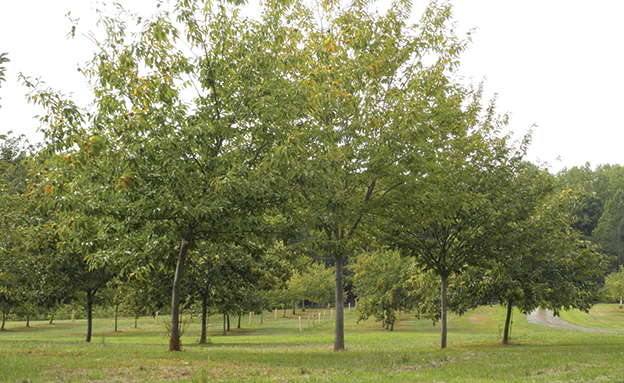 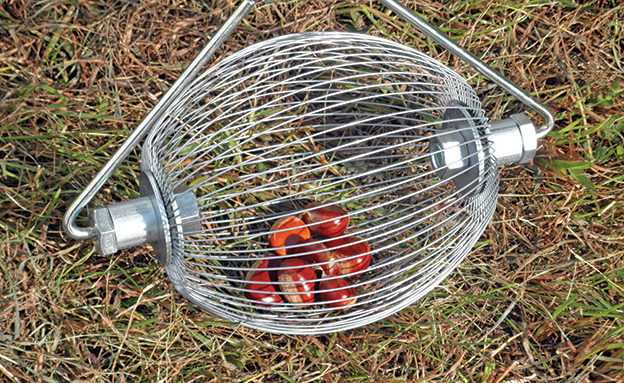 By rolling it along the ground, the Bryants collect chestnuts with the specially designed “nut wizard” before the deer do

Aside from beating voracious deer to the fall harvest awaiting collection on the ground, another challenge is a weevil that can get into the husk. But by far, the two major challenges are marketing ones: convincing buyers that there’s a demand and familiarizing Americans with chestnuts. After all, because chestnut blight wiped out virtually all chestnut trees in the early 1900s, no one alive today grew up with chestnuts.

The Bryants also grow nursery trees for others interested in getting a start, emphasizing that people can grow chestnut trees on three to five acres. They created the Chestnut Growers Group which encourages others to try, a kind of support group with no dues or officers that meets at a Nelson County farm once a year.

David is not a novice farmer. His grandfather, Clarence Bryant, grew apples and peaches in Nelson County and David grew up working in a neighbor’s apple orchard. After getting his undergraduate degree from James Madison University and a master’s in business administration from George Mason University, he moved into software work in Northern Virginia and Richmond.

Kim, originally from Cape May, New Jersey, is a graduate of Longwood College (now Longwood University) and lived in Richmond for a while where she and David met. They have two adult children and a middle school son. When not immersed in chestnuts, they go camping and are regulars at Calvary Baptist Church.

The Bryants are clearly sold on chestnut farming and the rural life. Kim says, “I have always wanted to farm. It’s just something that is a part of me. And now that I have the privilege of farming, it’s such a blessing to do what I love, outside where I love, with my family and friends, the people I love.” David echoes this sentiment: “We have fun with chestnuts. Some days the body aches, but I wouldn’t trade it for anything. I like the rural life. I’ll never leave.”

His biggest ambition is to watch a chestnut cookoff on television’s Iron Chef where chefs compete in preparing dishes. “Some day…,” he says wistfully.

Virginia Chestnuts sells cured or uncured chestnuts online at www.virginiachestnuts.com. They ship orders from the end of September to the end of December.

Glenda Booth, a freelance writer and editor who lives in Northern Virginia, writes about natural resources, historic sites, interesting people, public policy, travel, and other topics for magazines, newspapers, and online publications. She grew up in Southwest Virginia and received degrees from Longwood University and the University of Virginia.