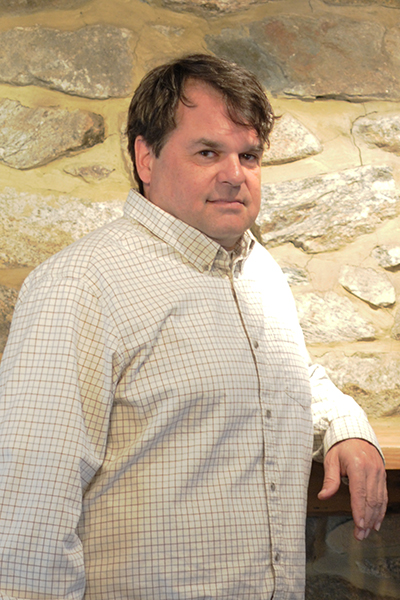 People dream of living in the country, a place of peace, quiet, and clean air.  Virginia’s Piedmont has been playing host to these dreamers for decades. In a time of mass urban migration, there is a stalwart minority swimming against the tide. In 1790, only one in twenty Americans lived in a city, one out of two by 1920, two out of three in the 1960s, and four in five in the 2000s.

Rappahannock County’s Joe Keyser turns house-in-the-country dreams into reality. “I’ve been building all my life. Even as a kid I loved structure, forts, and tree houses. My grandparents lived in Rappahannock, and growing up I spent a lot of time with them in the county.” Joe earned a degree in mechanical engineering at Colorado State University in 1987 and came back to Virginia in the early ’90s. “I worked for Charles E. Smith on the Skyline Seven and Worldgate projects, but my heart was in the Piedmont. When the recession hit in 1991, I took the opportunity move back to the Piedmont and start my Joseph Keyser Construction, Inc.”

People build houses in the Piedmont for lots of different reasons. It’s not only about retirement anymore. “Clients used to reference their projects in terms of a ‘retirement home,’ but the emphasis has shifted strongly from retirement to lifestyle.” People are living longer and checking out of their first or second career earlier. “My clients are very often in transition—the  construction process frequently coincides with other major life changes. Downsizing and second homes are driving forces; people are also building to create an epicenter for family.”

“In our mobile world,” Keyser continues, “people are working harder to make family happen. Out in the country, free from distraction, Piedmont houses are a great context for the good times. Even teenagers look up from their phones when there is no cell service, and lots of places out here are signal-free. For me, building is always about how a space feels—it’s less about square footage, more about accommodating the things they want to do. I suspect there’s a small group who build to justify owning a tractor.

“As a place, the Piedmont is different: people are more considerate in their approach. Everyone who builds here wants to protect the place. People come to Piedmont for the views and open spaces; everyone wants to bar the door on arrival,” Keyser says. “It’s a place people dream of, a stronghold of open space. As a builder, I feel like a steward of the resource—it’s finite, and we’ve seen it change quite a bit. Most of the development in Rappahannock has so far been pretty thoughtful, but it’s not to hard to find places where it’s out of control.

“Building a house is a well-defined process. Most people start with buying a piece of land. This can take a long time; it’s not unusual to spend a couple of years looking for the just-right spot. It’s not always easy. People can be unprepared for the volume of timely decisions required to complete a project—guiding clients through the decision cycles is one of my principal responsibilities on any project.”

After the land is secured, the next step is to find the right architect. “The best projects happen when the architect and builder have a good working relationship. I’ve had the great pleasure of working with Jay Monroe, of Monroe & Crocker, PC, in Flint Hill. He’s an incredible guy with a knack for combining his architectural vision and the client’s needs and ideas. He’s also a great landscape architect, and when you are building in the Piedmont, melding the home design with the terrain is vital to the success of a project.

“My projects typically take between 10 and 15 months to complete.” Bringing a builder in early in the design process can spare a great deal of frustration later on. “Getting the scale right is a real key to success. Rightsizing the house, siting it correctly to the view, and then integrating it with the landscape are all central themes in a successful project. It’s best to work with an architect who will meet you on site; the architect and builder need to walk the ground with the client, more than once, and preferably together, to get it right.

“Rightsizing and function, sightlines, and viewshed are the points I come back to on any project. Spend time on the land before you build and work with people who can spend time with you on the site, I guess is my best advice. There are some pretty amazing places in the Piedmont and lots of great opportunities await!” 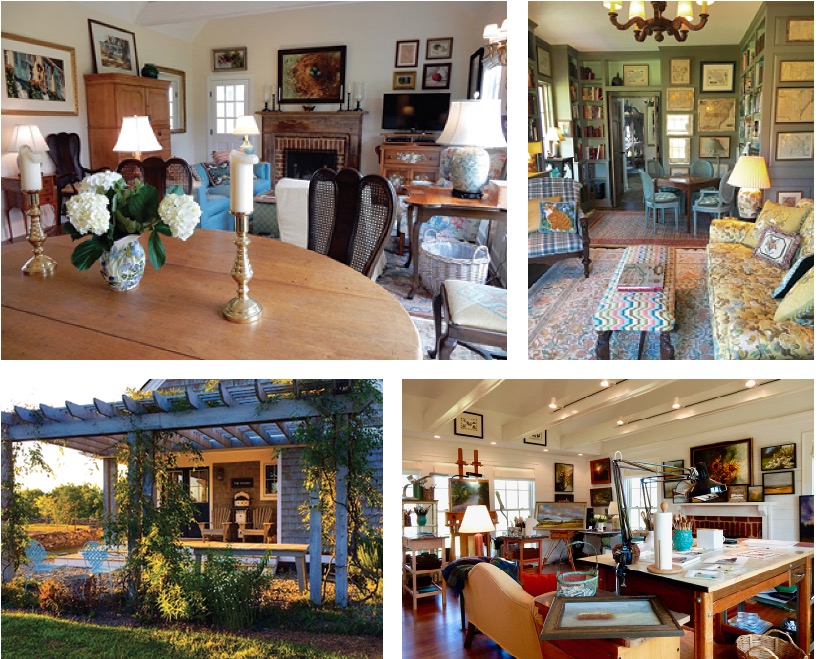 Set in the middle of a perpetual font of inspiration, the artist studio was built before the house. Arbors frame the views and blur the lines between interior and exterior spaces, creating a much larger feel to the studio. Ruthie’s land was really open; it allowed Jay to site the buildings exactly where he wanted them—that’s rarely the case. Most projects require some specific, focused work to integrate the buildings with the desired sightlines and views. Little Windbury’s interior spaces were scaled to fit the artist’s life and create a cozy feel. Clockwise: One of the artist’s bird nest paintings figures beautifully over fireplace; the library plays perfect host to the artist’s extensive print collection; the separate art studio with arbor; interior of the studio. 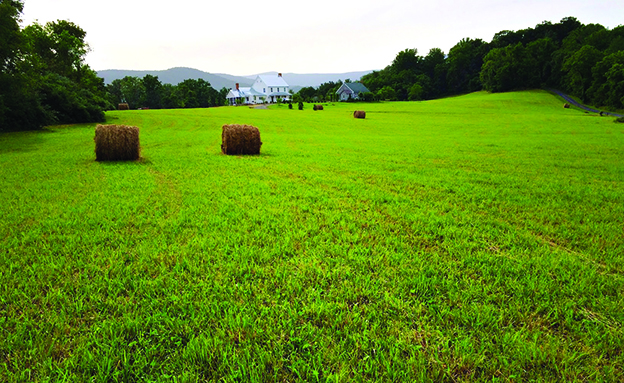 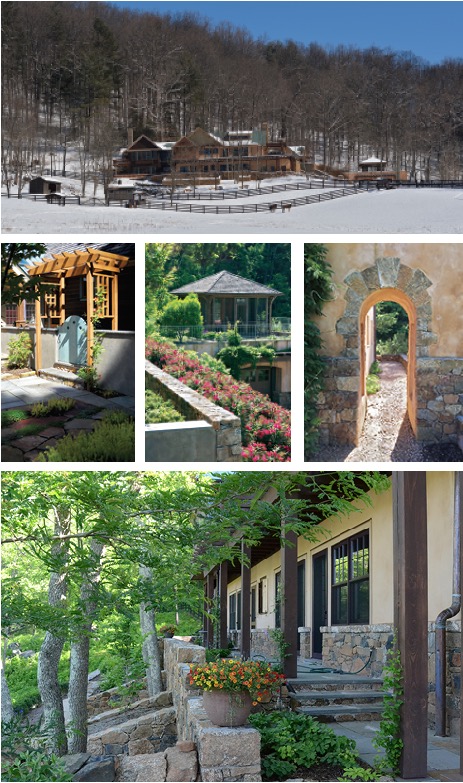 Rock Run Farm, a project that began in 2010, is also a design by Jay Monroe. The home is nestled into the hillside to maximize the spectacular views. “Jay brought me in early and we worked on site development. The house is knit into the landscape—we moved quite a bit of dirt and rock.” Around 4,000 sq. ft., the property has an additional guesthouse and garage house. The garage house features a rooftop garden, the rock walls are built from native rock taken from the site. The home is constructed of natural materials, stucco, and cedar siding to create the feeling of a home that’s ‘been there’ for a long time.” -Joe Keyser