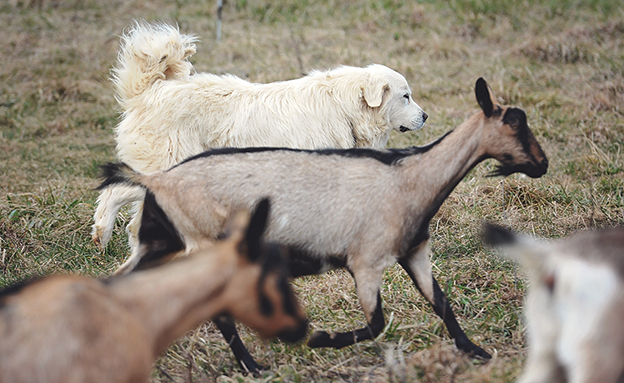 The goats at Georges Mill Artisan Cheese are protected around the clock, all year round from predators like coyotes. Courtesy of Georges Mill

Farming, it may go without saying, is fraught with challenges. Unseasonable weather, untimely equipment failures and unwanted pests can wreak havoc on a precious growing season. On top of all that, there are threats to livestock from a long list of predators. Badgers, mink, foxes, raccoons, hawks, and coyotes can inflict costly damage to a herd or flock.

When Sean and Jessica Baker began farming Day Spring Farm in Middleburg, their current house was not yet finished. In just a few weeks they lost 500 chickens to predators. “My poor husband had to camp out on the vacant property to keep the raccoons away,” Jessica said. 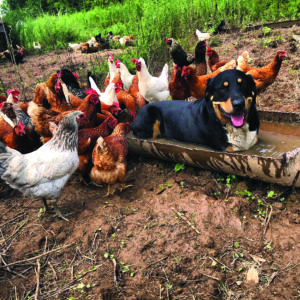 Andrew Crush of Spring House Farm in Hamilton was also losing chickens to predators at an alarming rate. “The straw that broke the camel’s back was when I went in the chicken coop and 24 chickens were stacked up in a pile with two little holes in each one’s neck with no other trauma noted,” he said. They lost over 150 birds that year.

These stories are not unique to this region, or this time. Livestock loss to predators has been an unfortunate reality for as long as there has been livestock. And one of the most effective solutions to the problem has been around for thousands of years. The use of Livestock Guardian Dogs has been recorded as early as 150 BC in Rome.

After losing hundreds of chickens, the Bakers quickly got their first dogs, one young Maremma and an older one needing to be rehomed. “They were perfect and allowed us to sleep again,” Jessica said. Currently they have Bernese Mountain Dogs, who Jessica says, are a good, well-rounded pet and farm mascot. Their presence deters predators, and barking is a big part of that. “People need to know that LGDs do bark a lot,” Jessica said. “That is their first line of defense!”

But from a strict guardian standpoint, she recommends Maremmas. However, people want different things from their dogs and there are many options. Many want their LGD to double as a pet, but in most cases that compromises their effectiveness against predators. “You want them used to children and other people, but they really don’t belong in your house,” Jessica says. “They need to know their place is in the field with ‘their’ animals.”

Spring House Farm currently employs two LGDs. Four-year-old Ranger and a new addition Clove are both Karakachan, a breed originated in Bulgaria. “Ranger deters predators each night, and the hawks during the day,”Andrew said. “You will often see him watching the sky during the day looking for hawks, and he will go stand among the birds if there is a hawk flying around.” Ranger gets paid in meat scraps and belly rubs, Andrew says. “He loves them both the same.” 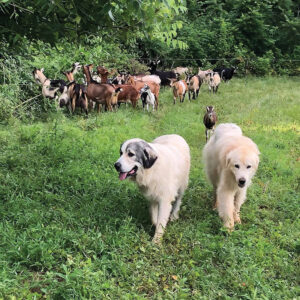 Charlotte Cooper, CSA Coordinator and Field Manager at Lost Corner Farm in Leeesburg, works alongside Gus and Major on the farm. Both four-year-olds, Major is a Central Asian Shepherd and Gus, a rescue from Texas, is a beautiful mix of Akbash and Anatolian Shepherd, with possibly some Great Pyrenees thrown in.

“Gus takes his job as chicken protector very seriously,” Charlotte said. “Chickens (about 300 of them) are the only livestock on the farm we currently have and wow, do they need looking after.” Between foxes, racoons, and birds of prey they are always being hunted, and Charlotte points out that the chickens don’t help themselves all that much when it comes to staying safe.

“Most often you will find Gus laying around the field, but as soon as any bird – and I really do mean any – he will jump up and run full speed barking until the bird flies away,” she said. He will also herd the chickens back together if any of them stray too far from the houses. No one taught Gus to do these things, he just does them.

Individual work ethics vary, of course, and apparently Major takes his job of napping quite seriously. “Until a new car drives past the field you will most likely find him sunbathing or completely conked out,” Charlotte says. But the dogs tend to stay in the fields day and night, and it has made a huge improvement for the safety of the chickens. 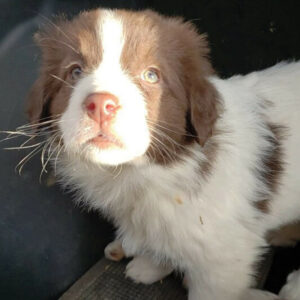 “You can hear them at night barking at god knows what, but it has translated to fewer chicken murders in the night when no one is around,” she said. An added bonus is they also chase off deer and eat voles from time to time which is always helpful during the growing season. Charlotte’s dog Billdogg has taken to Vole hunting and has shown both Gus and Major how rewarding it can be. “It’s pretty funny to watch the three of them all trying to shove their faces into one tiny hole, tails wagging.”

Molly and Sam Kroiz at Georges Mill Artisan Cheese in Lovettsville have been using LGDs for years to protect their goat herd. They place the dogs as puppies with the herd. “It’s pretty much all instinct, the guarding behavior isn’t trained,” Molly said. “You put them in with whatever they’re supposed to guard, from the age of eight to 16 weeks, and they imprint on those animals.” They live out with the goats from then on, sleeping outside or in the barn. Georges Mill currently has an experienced Great Pyrenees named Loretta, who shows their new, young Great Pyrenees/Karakachan mix Reba the ropes. The Georges Mill security staff protects the goats from a variety of predators, but the primary threat comes from coyotes.

Dogs were first domesticated so long ago no one can really agree on when and where. Since that time, though, they have been so much more than companions. Watching a dog work, using innate abilities bred into their DNA over countless generations, is a remarkable thing. From helping a hunter in the field, to supporting a law enforcement officer on the streets, to calming an anxious soul, to protecting a farmer’s interests, dogs prove their incalculable value every day. Have you thanked a dog today?