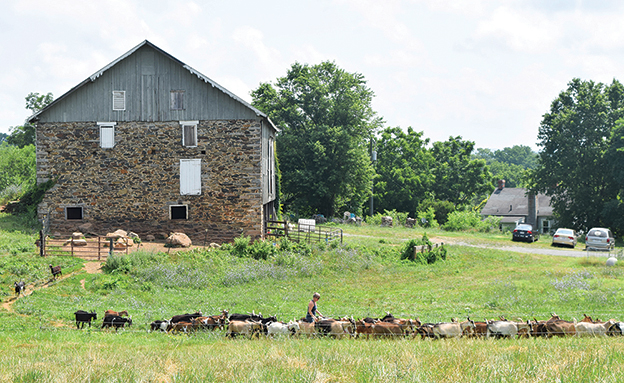 With records pre-dating The Declaration of Independence, a Civil War-era stone house, and the designation of Century Farm, Georges Mill Farm in Lovettsville is certainly steeped in Virginia’s history. A 1774 petition indicates that the 150-acre property was owned by German immigrant John George who came to Loudoun in the 1750s. In the late 1860s, Samuel George, John’s grandson, built the stone house, which is still standing and is now a bed and breakfast, run by descendant Fran Wire. During the Civil War, the Sixth New York Cavalry made its headquarters at Georges Mill on the road to nearby Harper’s Ferry, and later it was the site of a notable Confederate raid in 1865. More recently, it is home to Sam and Molly Kroiz, eighth-generation Georges, and their popular farmstead cheese operation, 24/7 farm store, and so much more.

“In grad school, I started making cheese as a hobby and I fell in love with it,” shares Molly Kroiz, who also met and fell in love with her now husband during that time. The couple met in Alaska where Kroiz was conducting fisheries research. They later moved to Washington state, which would further cement Kroiz’s desire to pursue professional cheese production. “Washington state, where we were living, has a lot of small scale dairy production, so I had seen it at work.” She continues, “I was really obsessed with cheese at that point…so we started scheming to see what we could do.” 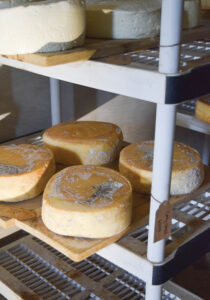 A desire to be closer to family would play a part in the Georges Mill Farm Artisan Cheese origin story too. Kroiz explains, “Sam was working construction, but it was the height of the recession, so there wasn’t really any work. We were both missing our families on the East Coast, and we knew this area was about 10 years behind in the local food movement compared to the Pacific Northwest and New England. We decided, it was a good time to start something like that.”

She laughs, “I quit my good government job, packed all my stuff in my Honda Civic, and drove home.”

They started building the cheese operation in 2012, with Kroiz learning the ropes along the way. “We got four goats initially. And, I didn’t know anything about goats or cows. Neither of us had any farming experience, but I spent a year just making cheese, milking one of the goats, and just playing around. She adds, “Then that winter, we got 10 more goats, and have been growing a little bit every year.”

As for the cheeses, “We started out just doing fresh cheeses, soft chèvre and some bloomy rind cheeses. We didn’t have the space to age cheeses so we started with just those. Oh, and feta. All fresh cheeses with quick turnovers.”

The fall of 2016, Kroiz launched a Kickstarter to help her raise money to build a cheese cave for expanded production. And now, in her eighth season, she is milking 40 goats and offering a wider variety of cheeses. “The fresh cheese, I do some seasonal rotating, some seasonal flavors and the three we have all the time. And then the bloomy rinds, we have three that we do there. I am doing some experimenting with a washed rind with some beer.” She continues, “For the aged cheeses, they are totally separate from the fresh, pasteurized cheeses. I do a blue and a tomme. If I have enough milk, I’ll do a manchego-style.”

Their cheese selections include everything from classic to adventurous. The Eula Blue is raw-milk-based and aged for 70 days in the cheese cave and their Grey Ghost Tomme, modeled after the French favorite, can age as long as six months. For fresh chèvre they offer plain, honey, herb, and garlic or seasonal flavors like ramps, roasted chili, strawberry, and even pumpkin spice. Cavalry Camp Ash gets its distinct flavor from a dusting of ash before aging and the Picnic Woods variety is rolled in Herbs de Provence. 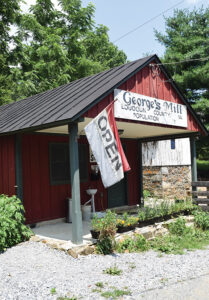 For Kroiz, an important part of expansion is maintaining quality, a task she accomplishes by using only milk from her goats and her scientific approach. “We are what’s called a farmstead dairy, meaning all of the cheese that we make is made with our milk. So, we have control over everything. I mean as much control as you can have over animals,” she adds with a smile. “In terms of milk quality, what the animals are eating really helps make our cheese unique because we’re really encompassing the flavor of the land specific to the area we are in.”

Of the cheesemaking process she says, “I feel like my scientific background is a really good foundation for cheesemaking because there is a lot of chemistry and a lot of biology involved in understanding it.” She continues, “But, there is a balance with plenty of unknowns and the artistic part of how things should look and feel.”

Also crucial to Kroiz’s success is her obvious love of what she does. “The fun thing about it is, I don’t feel like I’ll ever learn everything about cheese in my whole life. But it is fun to be able to experiment with new things.” 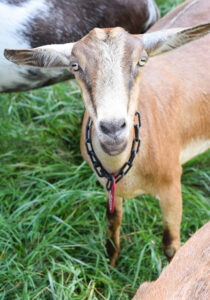 Kroiz’s collection of goat-based goodies can typically be found at farmer’s markets and farm stands from Falls Church to Purcellville and in restaurants and wineries, too. But lately, her wares are most easily accessed at the Georges Mill Farm Store, which has proved to be a valuable local resource during the COVID pandemic.

“It’s an honor system farm store, which means it’s not staffed. There’s no one down there, except maybe you’ll see me restocking. Because of that it can stay open 24/7.” She expands, “With everything that has happened because of COVID, it turned out to be a nice resource for the community. It’s a nice alternative to the grocery store for local folks, which is really cool.”

Not only a helpful option for consumers, Kroiz is using the farm store to support other local vendors. “For years we’ve had a handful of locally produced crafts, hyper-local, like my neighbors. So, we sell local crafts there: coffee that’s roasted in Lovettsville, crackers, and other things we think will go well with the cheese.” She elaborates, “But this year, because of COVID…we had some friends who would normally sell their vegetables to restaurants, but since the lockdown they had extra vegetables…and we were able to stock their veggies.”

She finishes, “It’s a great way for us to be able to offer our products and others to folks nearby.”

Though perhaps most meaningfully, the honor system farm store represents two qualities Kroiz herself seems to exude in excess: genuine hospitality and concern for fellow man. Kroiz says, “It’s been really hard for a lot of folks, and I feel very grateful. I am very grateful to live where we live and on a personal level, I am so grateful to have what we have.”

Kroiz and her husband can be proud of the chapter they are adding to Georges Mill’s very long history. With popular cheese products, a passion for the process, and commitment to customer and community, it’s no wonder Georges Mill Farm Artisan Cheese is much loved and will be for years to come.