Berryville is an unlikely place to find a high-end gilder. But then, so is every other place in America; gilders are an endangered species. I was picking up artwork from Purcellville’s Franklin Park Arts Center (a fantastic arts venue) when, as I was driving away, I spied some amazing gilt frames in a Berryville storefront window. Surprised at this unexpected appearance, I turned my car around. 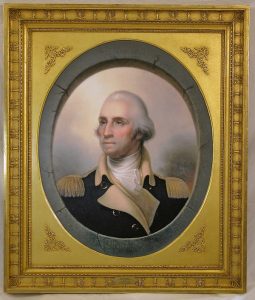 An exact replica of the Portal Portrait of George Washington (which hangs in the White House Oval Office), with frame by P. H. Miller Studio resides in the permanent collection of the George Bush Presidential Library Oval Office in Dallas, Texas, along with four other replica frames. (Collection of the Bush Presidential Library and the Bush Foundation)

Returning to the shop, I wasn’t disappointed. The frames and mirrors were world-class. Peter H. Miller, the proprietor and resident master gilder, was there and we had a great conversation about his work and late arrival in Virginia. Another refugee in the Piedmont, Miller and his wife moved to Purcellville in 2014.

Gilding is a decorative art form that is intended to make an object look like solid metal. Ancient Egyptians invented gilding, understanding that if a solid metal is made thin, it can be formed over complexly shaped surfaces. Peter is a master in handmade gilded art frames and also a master conservator/restorer. Gold leaf is measured for thickness by an industry standard known as gram weight. Depending on the manufacturer, leaf typically weighs in at 15–18 grams per 1,000 leaves—so thin that it is translucent. It takes about 10,000 leaves to equal the thickness of a dime.

During the Renaissance, Italians invented water gilding. Today’s water gilding is virtually unchanged, using the same materials, recipes, methods, and tools. No other application of gold leaf will render the same fine, burnished finish. Water gilding involves several steps. Surface preparation includes the application of eight coats of rabbit-skin-glue gesso, followed by sanding and polishing. Four to six coats of gilder’s clay, also made with rabbit-skin glue, are then applied over the gesso. This material is also sanded and polished. Once completed, the surface is hydrated with gilder’s liquor and the gold leaf is laid onto the wet surface. Finally, when the gold leaf has bonded, the areas to be highlighted are burnished with special agate or hematite tools to create mirror-like surfaces. Depending on the surface being gilded, various finishing methods are used to create either the illusion of antiquity or a complementary appearance for the painting to be framed.

I purchased a fine little tabernacle-style mirror. In speaking with Peter, I discovered that he created the mirror by gilding the glass in 12k white gold. He embellished the border with a classic etched design. The lap marks of the gold leaf are just visible through the glass. It’s such a rare experience today, to find something so individual, so finely made. 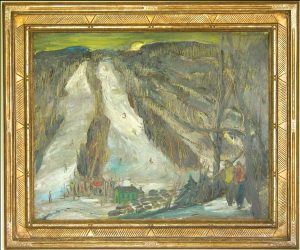 The studio applies museum quality standards in its work and materials. Peter also designs and creates a wide variety of furniture and home accessories, from simple to ornate, in addition to original frames. Despite his rural location, Peter’s clients hail from across the country and around the world. “My years making frames and restoring gilded objects for clients and professionals in the New York City area and New England freed me up to work wherever I like, and I love Virginia!”

Miller’s studio is organized to form a showroom/exhibit area featuring both his frames and decorative objects as well as pieces by Virginia woodworkers. An ongoing exhibit When the Word Speaks to Me highlights works in wood by regionally noted craftsmen, including Bluemont’s Harriet and Don Maloney, Berryville’s Mike Fraser and Gary Smith, Winchester’s Mark Zimmerman, Middletown’s Terry Fox, and White Post’s Ron Light. ​

Peter grew up spending time in his father’s wood shop learning basic skills. These experiences are the foundation of a lifelong passion for woodworking and a spirit of craftsmanship. He learned traditional water gilding and related disciplines through the Society of Gilders, an organization dedicated to upholding professional standards and preserving traditional gilding skills and techniques. He studied with gilders Giovanni Bucchi, Grace Baggott, Marty Horowitz, Lou Tilmont, Jill London, Jeff Solomon, Michael Gilbert, Susan Jackson, Patricia Miranda, Frances Binnington Federer, and Carole Halle. He has served as president of the Society, and is also certified with the Professional Picture Framers Association.​