With the tried, true, and new 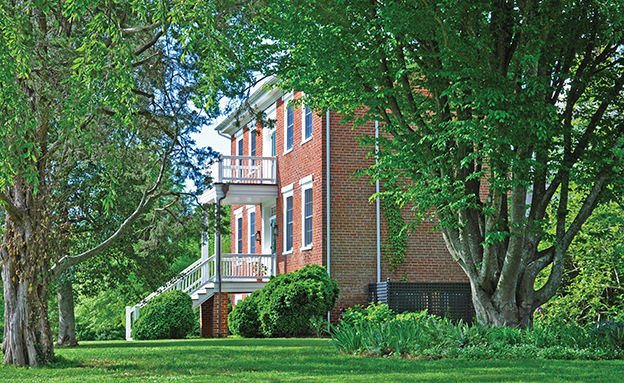 Merriewood today. The original house did not have a front porch; the construction was halted due to the Civil War, and then Major Jennings lost a significant amount of money by investing in Confederate bonds. The present porch was added by the current owners during the 1996 renovation.
By Bridget Bryant

Virginia Donelson Collins’s family has an eye for art, design, and decor. Combined with an appreciation for family antiques, thrift store finds, historical architecture, and thoughtful restoration, that adds to the creation of a stunning home at Merriewood, the antebellum Greek Revival Virginia estate she shares with her husband, James Collins.

The original house was designed and constructed by master builder Major William Jennings in 1856, in a two-over-two architectural layout. The house had two rooms on the ground floor and two on the second floor, with a center hallway between, making the house only one room deep. It was constructed from materials on the property: homemade bricks and lumber milled by slaves. 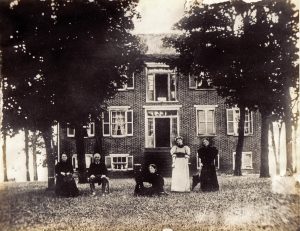 Major Jennings and his grown daughters with his second wife. All are buried in the Jennings’ family graveyard here on the property. Major Jennings had six children: four daughters and two sons. Family lore has it that he planted six maple trees to honor each child; when one of his sons was killed in the Civil War, his tree died shortly after.
Courtesy of Jim Holladay

Many changes were made to the home through the years by subsequent owners after the Jennings family, including the installation of bathrooms and closets in the original rooms and a small addition off the back of the house.

The Collinses began a restoration of the house in 1996, eliminating the decrepit 1940s addition. They restored the house to its original state, and—locating all closets and bathrooms in a new, large, modern addition—returned the rooms to their Civil War-era condition.

The restoration of the house and Mrs. Collins’s eye for thrift store gems has resulted in the seamless combination of family antiques and finds that have been restored to create a unique and elegant living space. 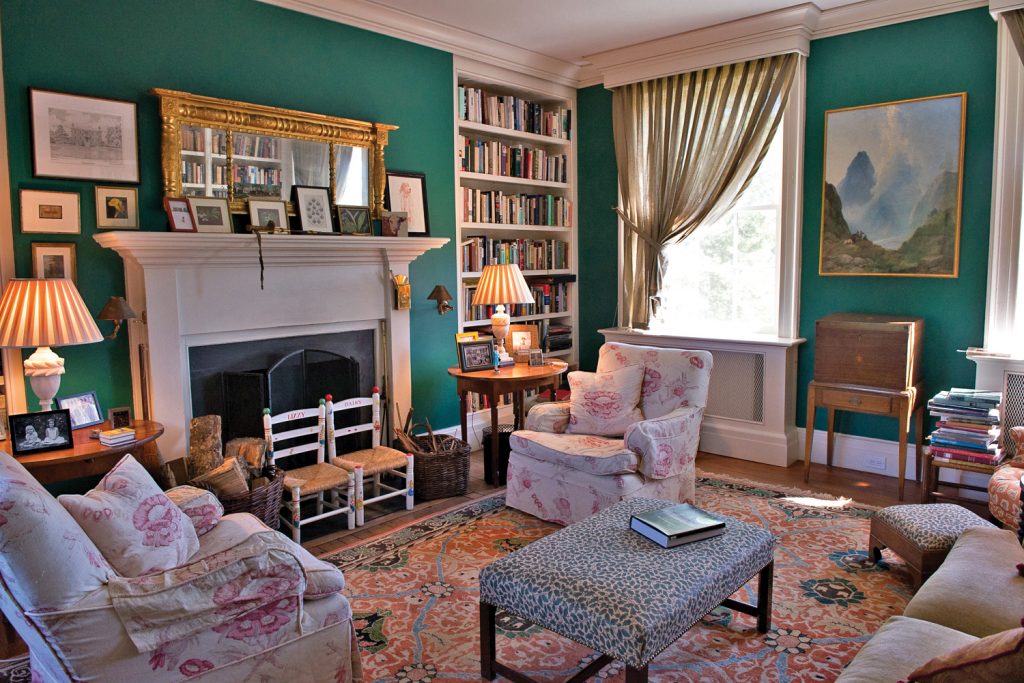 The library
As part of the original house, this room needed the most restoration to return it to its original state. Previous owners had installed a bathroom which had to be removed. Visible between the windows is a cellarette, or spirits chest, which belonged to Mrs. Collins’s great uncle. 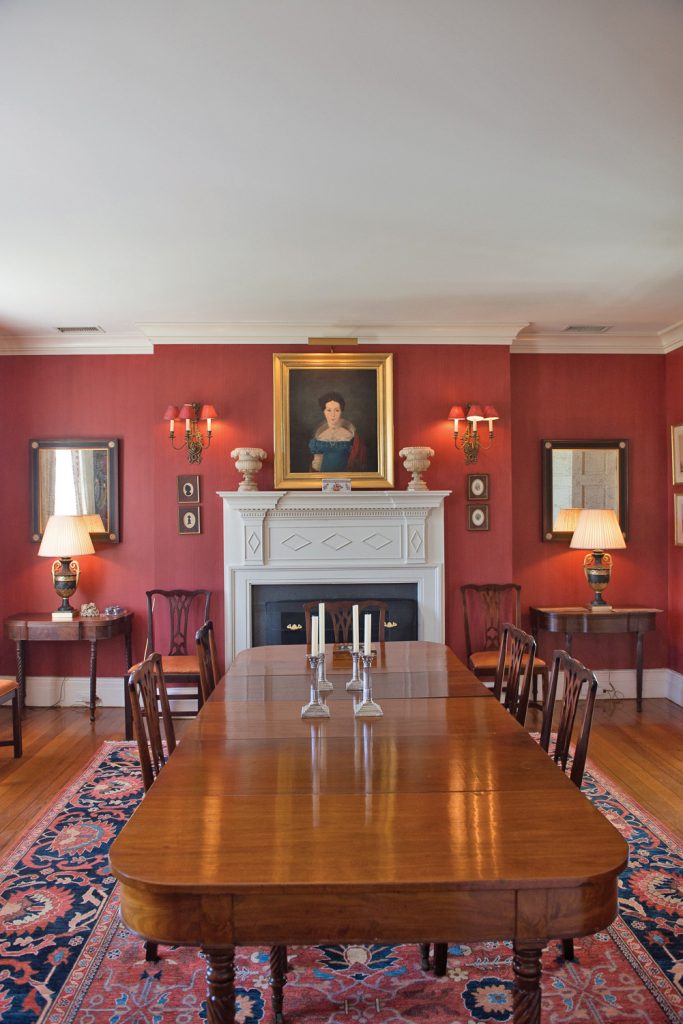 The dining room
The chairs in the dining room are early nineteenth-century English-country Chippendale; six are original, and four are copies made in Charlottesville to complete the set. The portrait above the fireplace is Mrs. Collins’s third great grandmother, Elizabeth Wegelin Corty, whose husband fought in the Napoleanic wars. 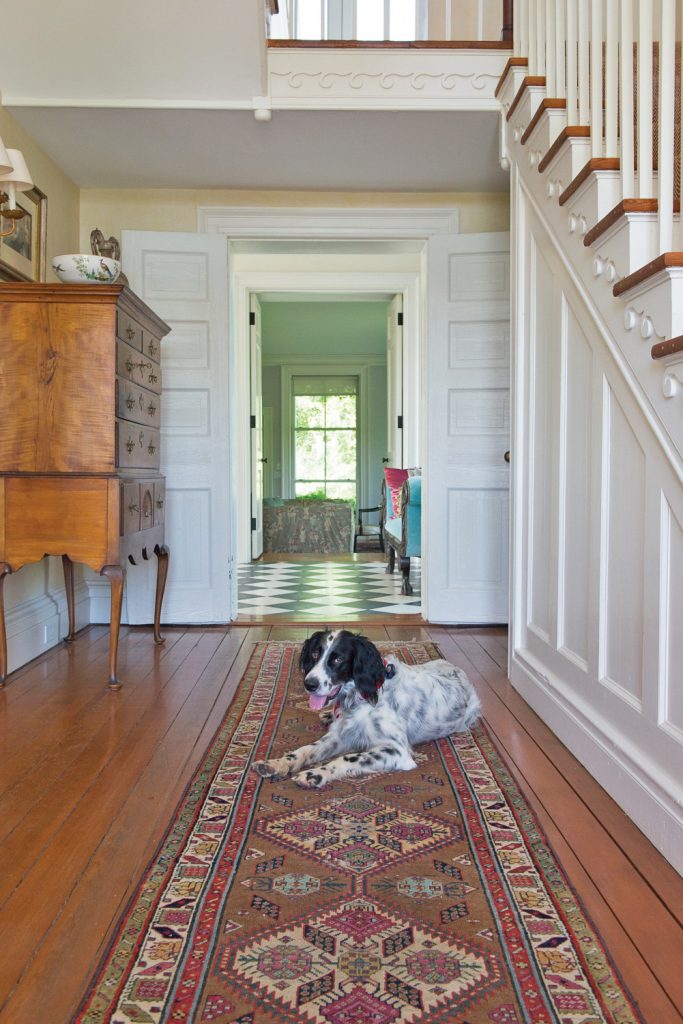 English setter, Robbie, lies in the front hallway of the original house. From here, the living room of the new addition can be seen on the other side of the checkerboard hall. The heart-pine floors and most of the glass in the historic house are original. The front hall runs the 18’ depth of the historic house; in the summer the front door and the double doors at the rear would have remained open for a cross breeze. The one-room depth of the original house allowed for windows on the east and west sides to bring in a significant amount of light.

“When houses of this style and period are added on, it is typically done in an ‘L’ or ‘T’ shape. Because this addition is actually bigger than the brick portion of the house, the challenge for the architect, William Ryall of NYC, was to not let the ‘tail wag the dog’ with a massive wing. His solution was to run this gallery (above left) along the back of the house, widening the appearance of the original rectangle, and to construct the living room with no room above it. Bathrooms, closets, the kitchen, and two additional bedrooms are on this side of the house.” 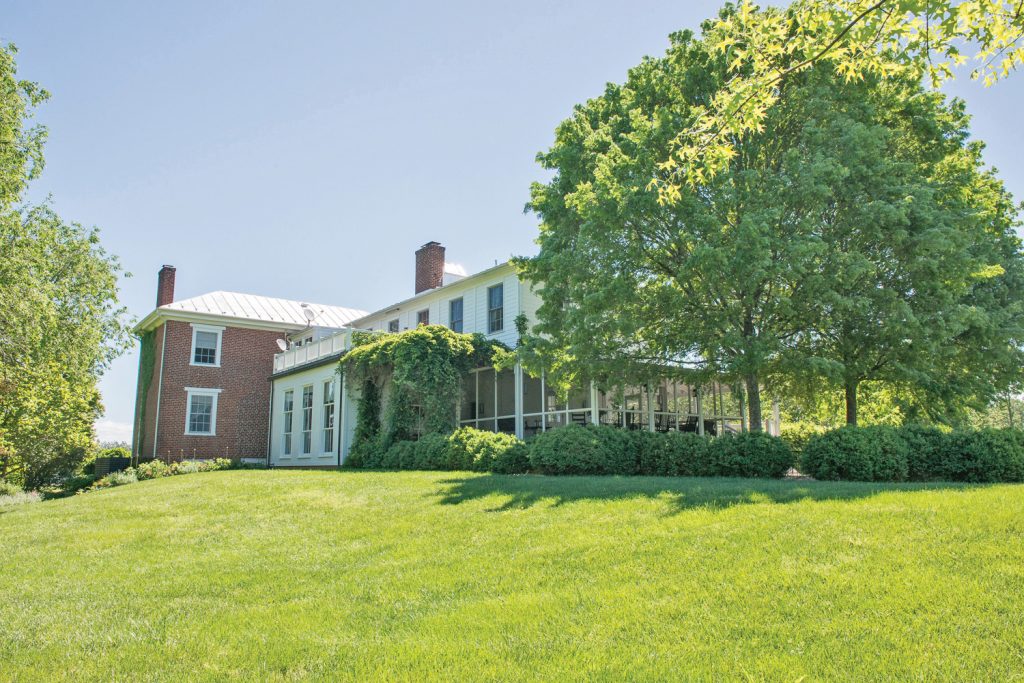 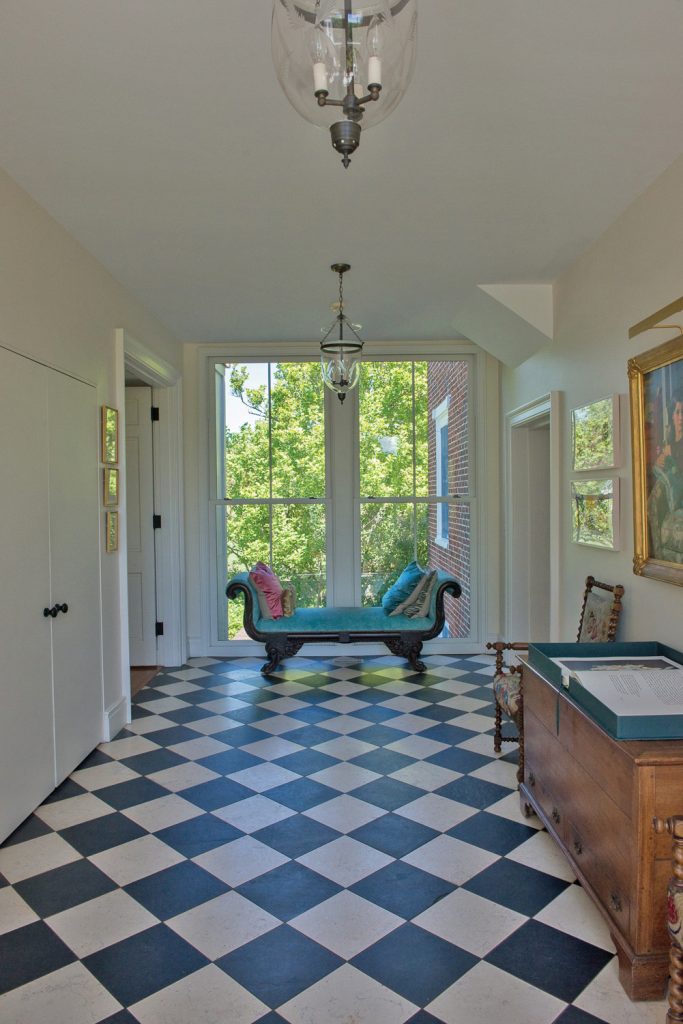 The checkerboard hall which connects the original house to the new addition. 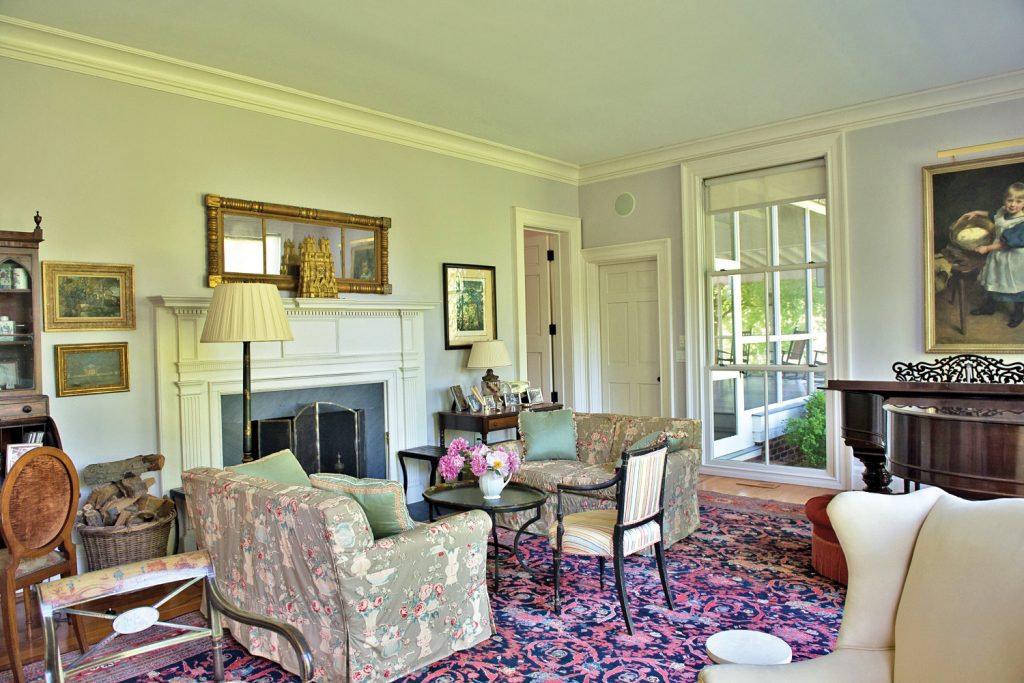 The living room holds many family antiques, including the “Model B” Steinway grand piano that was given to James Collins’s grandmother in 1888 for her 16th Christmas. 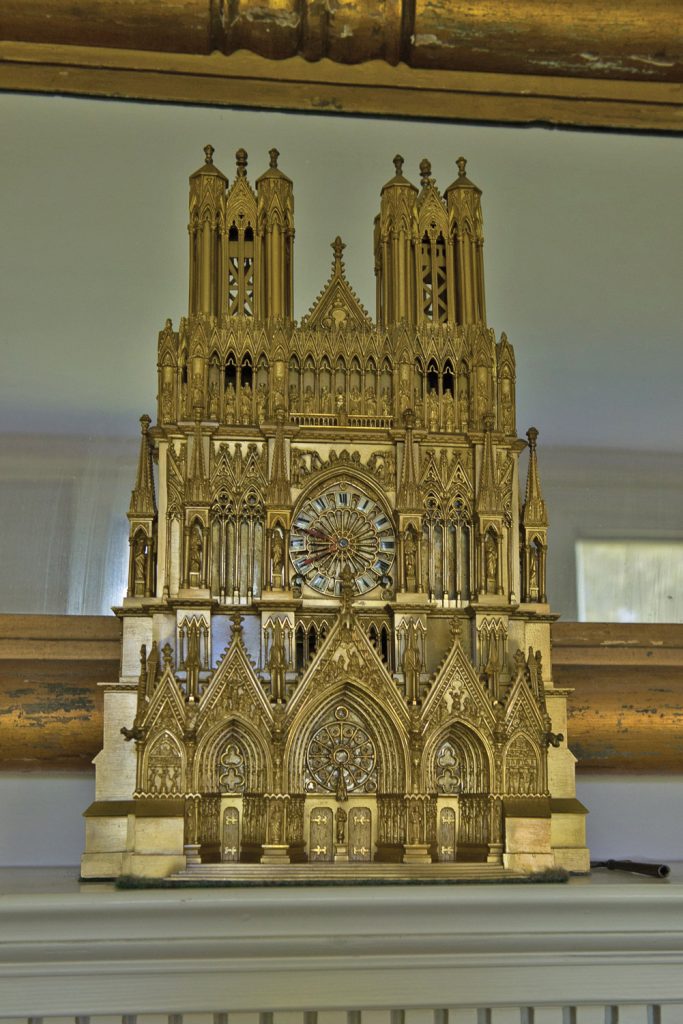 A bronze clock replica of Reims Cathedral in France, given to Mrs. Collins’s ancestor Jose Santos Guardiola by Queen Victoria in the mid-1800s in commemoration of a treaty accomplished between Britain and Honduras during Guardiola’s Honduran presidency. 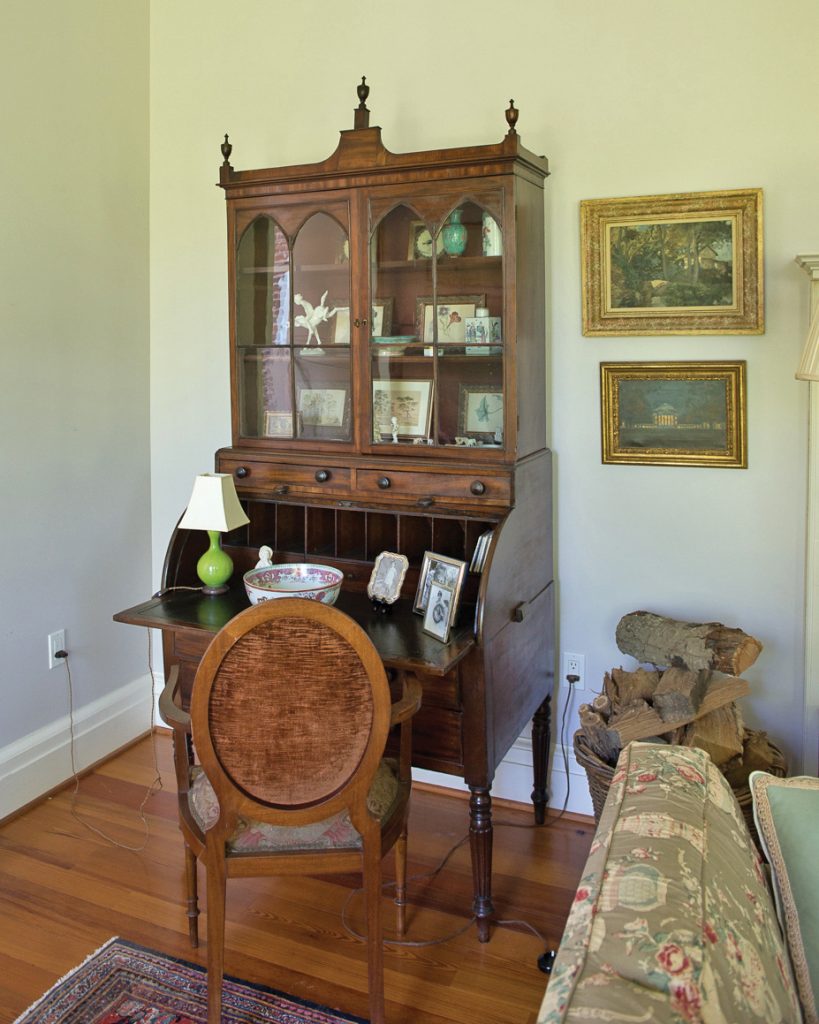 This Sheraton secretary dates to the early 19th century.
“When my crazy aunt sold all the contents of my grandmother’s house when she died, this beautiful secretary went to auction. I couldn’t get to the auction and I found out who purchased it, and when I contacted her she said she’d never bid against a member of a family, so she sold it to back to me for what she paid for it: $1000.”
—Virginia Donelson Collins 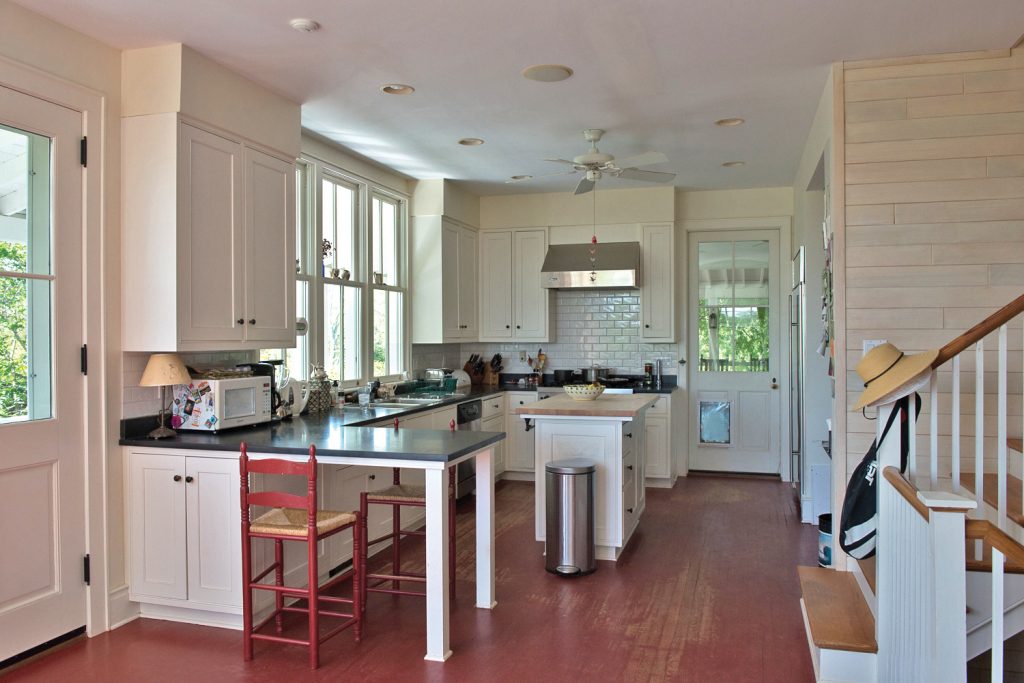 The spacious, light-filled kitchen in the modern addition. 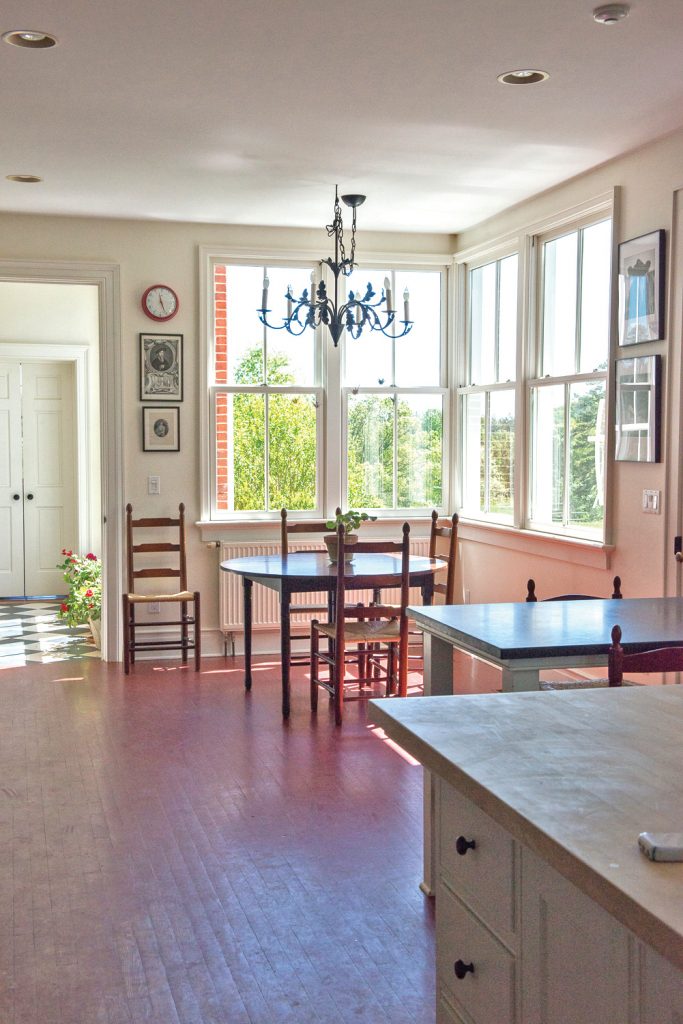 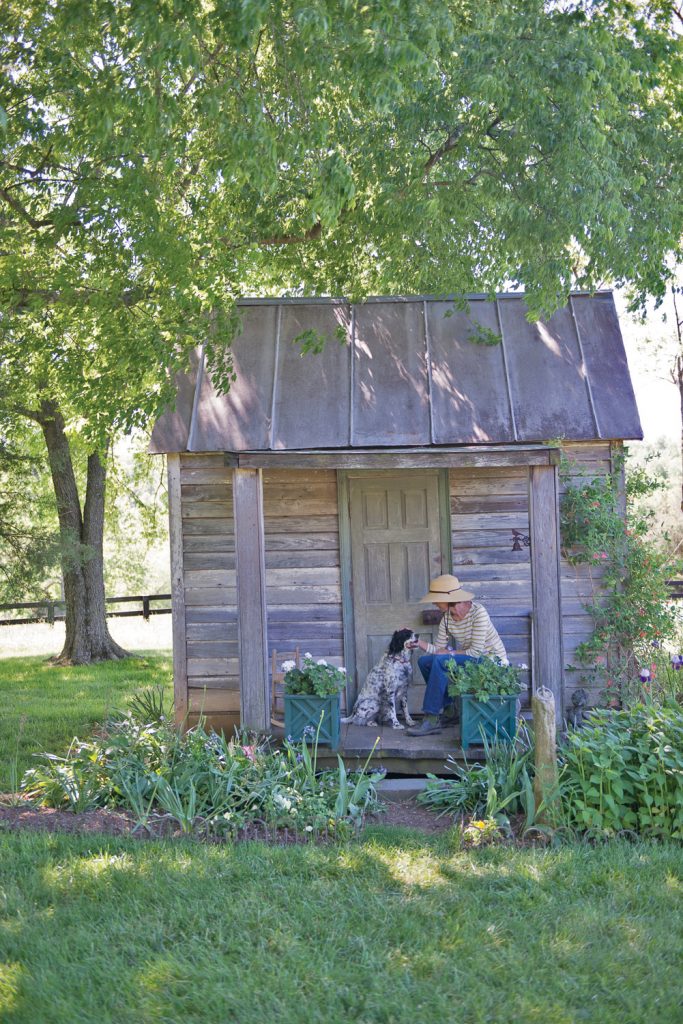 The play house. The Donelson’s daughters’ playhouse was built entirely of old recycled materials by Joseph, Joseph and Joseph Antiques in Charlottesville, and is furnished entirely with thrift store finds.