The smell of shotgun smoke hung in the heavy morning air as Ripp, my friend Shawn’s young German Wirehaired Pointer, swam toward me. As he approached the pond’s edge, I knelt to greet him, watching as the white belly of the wood duck in his mouth pushed a V-shaped wake through the still water. It was a short retrieve, only fifteen yards or so, but the journey that brought that wood duck to hand began long ago. It began with a dog named Preacher.

Shawn Story had always been a duck hunter. He had never owned a bird dog before, but hunted a lot with friends who used Labrador Retrievers, known for their water retrieving prowess. When he met and hunted alongside Freebee, a German Wirehaired Pointer owned by his good friend Justin Wisch, he became enamored with the breed. And when Freebee, the number one field GWP in the country in 2012, was bred with Oakley, the top winning GWP in the history of the breed and the only GWP to ever win the sporting group at the storied Westminster Kennel Club Dog Show, Shawn found himself in line for a puppy with as much conformational quality and hunting prowess in its pedigree as could be mustered. 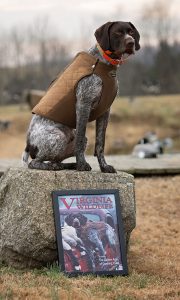 His name was Mountain View’s Pale Rider, Shawn called him “Preacher,” and he was born with everything his pedigree promised. He was an impressive physical specimen and a hunting machine. But good breeding is just the beginning. “As breeders we have done well by the breed to produce great dogs in the ring and field, but they are only as good as the owners that bring them along,” Preacher’s breeder, Claire Wisch Abraham, said. “People like Shawn and Justin did right by them.”

Shawn trained through the Potomac Chapter of the North American Versatile Hunting Dog Association (NAVHDA), and worked with Preacher every Sunday for three years throughout the offseason. Preacher attained his Natural Ability and Junior Hunter titles with exemplary scores before he was a year old. Field trial judges were unanimously impressed by the young dog’s natural ability. During the season, Shawn was hunting at every opportunity for duck, goose, quail, and chukar. Shawn and Justin drove all over North Dakota hunting pheasant and sharptail grouse with Preacher and Freebee. Preacher was a rock star, a one in a million dog.

Hunting was everything to Preacher. He didn’t care about toys or perk up at baby talk or relish any of the trappings of domestication that dogs typically enjoy. He wanted to hunt, period. Even on a walk, he was always hunting.

Preacher didn’t love everyone. Maybe he didn’t quite trust most people. Maybe, like his dad, he just preferred a small but strong circle of loved ones. Regardless, I’ve always felt privileged to be inside this circle. Hunting with Preacher and watching him work was an absolute joy. So it was extremely special to me that on my first duck hunting outing, a slow morning on the banks of the Potomac River when I shot my first duck, Preacher retrieved that Merganser and brought her to me.

By the summer of 2018, at three years old, Preacher was poised to begin his first best season in the fall. He had trained. He had hunted. He was ready. Then tragedy struck.

Shawn was traveling on business when his wife Tara called with the devastating news that Preacher had been killed in a tragic accident. Shawn was four hours from home when he got the call, and made it home in three-and-a-half. But Preacher was gone.

A few months earlier, Preacher’s half-sister Fanta had joined Shawn and Tara’s household. Another descendant of the great Oakley, Fanta was a star in the show ring, earning Grand Champion titles in both the U.S. and Brazil. But her showing career was winding down, and she had not proven to breed successfully, so they took her in. She fit in wonderfully and got along great with Preacher. But Shawn, Tara, and Fanta were all sorts of lost with Preacher gone. 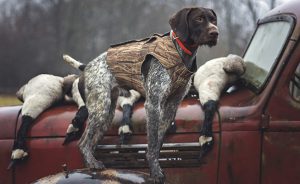 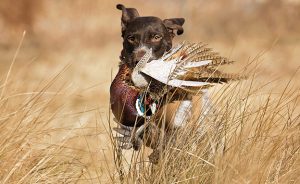 A few weeks later, Fanta came into heat. They wondered, would it be possible to breed her? It had never worked before despite numerous attempts, and Fanta was not getting any younger. Shawn knew he could have a thousand dogs and never get another Preacher. But it was a chance, however small, to capture a little of that magic, that shared DNA, and to have his new puppy whelped and raised right at home by their sweet Fanta, with Shawn and Tara caring for the pups every step of the way. They had to try.

The sire would be Player, a Grand Champion, Master Hunter and NAVHDA Utility Prize 1 winner out of Ed Shupp’s Hard Head Kennels. The pregnancy took, but it felt tenuous with more vet appointments and medications than normal. Ultimately, a c-section was performed due to complications and a fear of losing the litter. In the end, four pups were delivered but it was determined that this was to be Fanta’s first and last litter.

“Please let there be a boy,” Shawn pleaded. Fate answered with three males in the litter of four. Two were mostly white, like Fanta, but one had the same roan and ticked coloring Preacher had. Shawn told people he hadn’t decided which dog he would choose. “But in my heart of hearts, I knew which one I wanted to train to be my dog,” he confessed.

Ripp and Preacher were obviously different dogs. Preacher was a phenom, after all, and holding any dog to that standard — let alone a new pup — would be ill advised. But Shawn began training, this time with a different attitude than he took with Preacher. He decided to focus less on the testing he did with Preacher, instead focusing on training just to hunt.

“I did more training and trialing with Preacher when I know he would have enjoyed more hunting,” Shawn said. “With Ripp I’m trying to keep it fun.” With the help of two other trainers through his first summer, Ripp began progressing nicely.

Opening day for duck this fall was a crisp morning in Virginia, and would be Ripp’s first outing hunting for wild birds. Shawn, our friend Mitch Miner, and I waited in a blind at a local pond in the dark before dawn, Ripp fidgeting at Shawn’s feet. Shortly after first light, five wood ducks dropped in above us. We stood and fired. I took the bird farthest to the left, and Shawn and Mitch each dropped another. Two of the birds dropped close to the bank, but mine was in the middle of the pond. 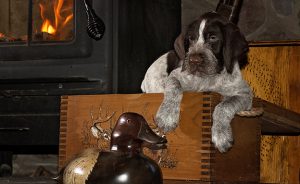 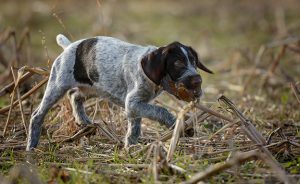 Shawn pointed toward the duck and told Ripp to fetch it. He swam out to the first duck he had ever seen, smelled or tasted. Confused at first – he had been training mostly with quail – he swam a few circles around the duck and even barked. But when he took it in his mouth, he heard the three of us cheer and praise him, and it all clicked. He knew he had “done good” and brought the duck toward shore with his head held high. He swam, then waded through the mud at the pond’s shallow edge and handed me the second duck I’ve ever taken, the first since Preacher’s delivery of that Merganser a year ago.

Ripp’s second outing the following week took place at the site of that first Preacher retrieve for me, also the site of Preacher’s very best duck hunting day later that season. The ducks weren’t flying that day but it mattered little. Shawn has always been a patient hunter and knows it’s part of the game. But he also had another reason for being there that day.

As the decoys and gear were being packed up, Shawn took Ripp to the river’s edge. He opened a small vial, paused, and poured the contents into the water. The pair watched the current take away a bit of all that remains of a legendary dog. As the ashes disappeared, Shawn said to himself the words whose initials spell the name of the dog standing with him, “Rest in peace, Preacher.” And with that gesture, with that closure, the pressures on Ripp to replace the irreplaceable were washed downstream. He is a great dog loved by a great hunter and that is enough.

Their turn to make memories together is just beginning.