The myth, mystery, and romance of absinthe intrigued Peter Ahlf, an aerospace engineer-turned-distiller at Middleburg’s Mt. Defiance Distillery and Cidery, where absinthe is a star product.

Absinthe was the favored drink of 19th century bohemian artists and writers in Paris. It was blamed when a Swiss man murdered his wife and daughters in 1910. It’s been the alleged cause of decadence, numb tongues, hallucinations, blackouts, and psychedelic experiences. Some claim it is an aphrodisiac and enhances the senses.

Ernest Hemingway is known as one of the 20th century’s most bibulous absinthe drinkers and referred to the beverage in several of his novels, including Death in the Afternoon and For Whom the Bell Tolls. Artists Edgar Degas, Henri de Toulouse-Lautrec, and Vincent van Gogh painted absinthe drinkers in the 1800s and, as legend has it, they enjoyed this enticing green liquor too much. Playwright Oscar Wilde, a regular absinthe drinker, famously detailed the drink’s effects on him: “The first stage is like ordinary drinking, the second when you begin to see monstrous and cruel things, but if you can persevere you will enter in upon the third stage where you see things that you want to see, wonderful curious things.” 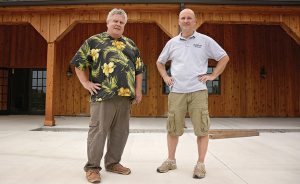 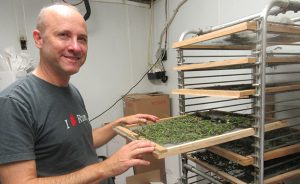 Clouded by a complicated social and legal history, absinthe has been the bad boy of alcohol over the years. Served the classic French way, its disrepute is undeserved, argues Ahlf.

There are so many misconceptions about absinthe and spurious products purporting to be absinthe that this spirit has its own advocacy organization, the Wormwood Society. The website explains, “The Wormwood Society is a non-profit association focused on providing current, historically and scientifically accurate information about absinthe, helping to reform the regulations impacting absinthe in the United States and encouraging the responsible enjoyment of a safe, rewarding, and historically interesting beverage.”

What’s the wormwood connection? Ahlf, one of a handful of absinthe makers in the country, explains, “One of the ingredients is wormwood, but there are no worms nor wood involved.” Wormwood is the colloquial name for Artemisia absinthium, the definitive ingredient in the beverage. He grows and dries most of the herbs that go into absinthe — grand wormwood, Roman wormwood, genepi, peppermint, lemon balm, and hyssop. He imports fennel from Provence and anise seed from Andalusia Spain.

To produce this limey-green spirit, he soaks, then distills grand wormwood, green aniseed, fennel, and peppermint in alcohol and steeps the remaining herbs in heated distillate. Ahlf makes around 400 bottles of absinthe verte, a French green absinthe, a month. The distillery sells as much absinthe as they do rum and bourbon. “It’s a big deal for us,” says Ahlf.

How to Drink Absinthe 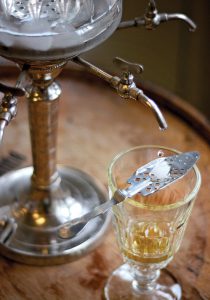 An absinthe fountain drips ice cold water over a sugar cube into an awaiting taste of absinthe. Fountains like this have four or more taps, adding a social element to the ritual of drinking absinthe.

“You should never drink it straight,” cautions Ahlf. Absinthe typically is 55 to 72 percent alcohol. Ahlf’s is 70 percent alcohol and it has no sugar or other sweeteners. “Most people say it tastes like licorice,” offers Ed Jenkins, the bartender in Mt. Defiance’s tasting room. “It has an anise flavor and a lot of people love it. It can grow on you the more you drink. It’s an adventure,” he adds. The distillery sells one 13-ounce bottle for $31.99.

Absinthe is usually slowly imbibed as an aperitif spirit before meals. Basically, experienced absinthe drinkers dilute it with cold, iced water, three to five parts water to one part absinthe. While some absinthe purists say they practice the “absinthe ritual,” the Wordwood Society’s website notes, “. . . it’s really not much more complicated than fixing a cup of tea.”

At Mt. Defiance Distillery, bartenders pour one-half ounce in a fairly heavy, special stemmed, sundae-type glass that has a reservoir or bubble just above the stem and place the glass under an absinthe fountain. They rest a specially-designed, slotted spoon on top of the glass to hold a sugar cube and drip water from the fountain’s spout through the sugar cube until the sugar disappears. The absinthe becomes milky or cloudy, a state called the “louche.” (In French, “louche,” pronounced “loosh,” means “turbulent” or “cloudy.”) The absinthe releases herbal aromas and some say the flavor “blooms.”

Even the bottle’s label is alluring, designed in the style of Alphonse Mucha, a Czech artist who lived in Paris during the Art Nouveau period. It features a demure woman in a lavender gown, perhaps in a reverie, with flowers in her hair surrounded by red, pink, and yellow blossoms and a green and gold design.

Mt. Defiance Cidery and Distillery is a partnership of two friends operating in two separate buildings about a mile apart , the distillery and the cidery, on the west and east ends of Middleburg’s Washington Street.

Ahlf worked in aerospace engineering for 24 years, including 16 at the National Aerospace and Space Administration’s Washington, D.C., headquarters. For fun, he started doing woodworking, making custom cabinets. Marc Chretien hired him to design and build a tasting room in the former automobile repair shop, now the distillery. Chretien, the cidery manager, is a retired lawyer and former State Department senior advisor who went to Iraq and Afghanistan after 9/11. 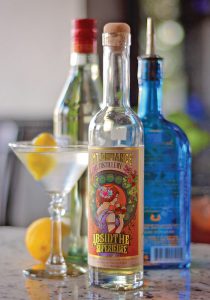 Rarely served straight, or neat, absinthe can be enjoyed diluted with cold water and sugar, or mixed in a number of cocktails like this Turf Club.

Ahlf started by making apple brandy and rum, but was hooked on absinthe’s myth and romance. He saw a marketing niche and turned to absinthe because it could make their distillery stand out. When he started in 2015, no one in Virginia was making it and today, the closest producer is in Philadelphia. He could find scant information about absinthe production, but connected with a small southwest Virginia company that grows herbs organically, Absintheherbs.com. He perfected his beverage through trial and error. Unlike bourbon or other liquors that have to be aged, “You don’t have to wait for it,” he says. “You can serve it quickly after it’s done. Bourbon has to age for at least two years.” And he summarizes, “At the end of the day, I can sip.”

The distillery is open to the public Tuesday through Sunday, 12 noon to 6 p.m. They host various tastings, including cocktail flight rum and chocolate pairings with chocolate from Leesburg’s The Conche.

For more information, including where to buy Mt. Defiance absinthe, visit www.mtdefiance.com and their Facebook page.

Ahlf is organizing the first-ever Middleburg International Absinthe Festival for June 6, 2020, to showcase absinthe and offer tastings. He is also planning seminars and absinthe herb garden tours during the event. Between 30 and 50 distilleries will participate in an absinthe competition.