A grove of more than 300 ginkgo trees (Ginkgo biloba) burst into a blaze of color each fall at Blandy Experimental Farm near Boyce, VA.

Thousands of leaves, all the color of the sun as it slips behind the Blue Ridge Mountains. Blue sky shone through bare branches. The breeze has gathered leaves into drifts, swept together like the tips of hair at a barbershop. I was standing in the Gingko Grove at Blandy when that atrocious simile came to me. The inadequacy, whimsicality, borderline absurdity of the phrase bothered me, so I stood, my attention fixed on the yellow fallen leaves, waiting for some clever aphorism to happen upon me, until I realized that perhaps this was not meant to be described. I was doing just fine, reflecting on this golden panorama, experienced wordlessly, in appreciation of the almost-silence, day after day as the ground is littered with leaves.

Everything was motionless. Wading through leaves slick with rain, I had the feeling that I was late. Fallen leaves are still slick with yesterday’s rain. The ground was slippery,  like trudging through snow and stepping on a patch of ice. It was easier to remain still. The air was sodden with the heavy sticky scent of gingko. My breaths were weighed down and my attention drawn the movement of air through me. Perhaps that is why Chinese monks in adorned their temples with the ancient trees: a way to foster mindfulness during meditation. 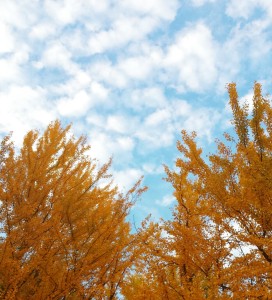 Some of these gingko trees have shed and regrown their leaves eighty times or more, ever since Dr. Orlando E. White, the first director of Blandy, planted a sapling in Boyce soil in 1929. Soon thereafter, students helped to plant nearly six-hundred more trees, thus seeding what would grow into the grove in which I stood.

The tree has a history far outdating Blandy, civilization, and humanity. Gingko is the “living fossil,” and records trace its existence back 270 million years. Gingko canopies shaded the Jurassic era forests, casting shadows onto the creatures whose bones we admire in disbelief and wonder at museums. The tree’s history is contained in the shape of its leaf: a tadpole, a flame. It is unchanging, atavistic, and essential. Maybe it is this agelessness, this permanence, that lends credence to those who attest to the memory-enhancing benefits of the leaf. Perhaps it is a placebo, although there is something poetic about the ancient tree’s ties to memory, a  remembrance of a time that far precedes us.

Without realizing it, yellow shadows have darkened as the sun sets between peaks. Golden, with beams that radiate like veins, it casts a shadow over the thousands of small setting suns that have fallen to the ground.