Since opening their doors in 2002, the luthiers at Charlottesville’s Rockbridge Guitars have accumulated an unbelievably star-studded list of clients including Dave Matthews, Dave Stewart (Eurythmics), Jason Mraz, Jon Russell (the Head and the Heart), Mary Chapin Carpenter, Matt Sorum (Guns N’ Roses), Mike Campbell (Tom Petty and the Heartbreakers), Ray LaMontagne, Richie Sambora (Bon Jovi), Waddy Wachtel (session guitarist for Stevie Nicks, Keith Richards, and more), and Warren Haynes—and that’s just the tip of the iceberg. Handcrafting instruments in their shop off the Downtown Mall, the company’s four owners now build about 60 acoustic guitars a year for some of the world’s most talented players. But not so long ago, the company was little more than a seemingly absurd dream harbored by co-founder, Brian Calhoun.

“When I was in high school, a teacher of mine brought in a musical instrument he’d built,” explained Calhoun. “Fascinated, I wound up doing an independent study that involved building a mandolin.” Diving headfirst into the project, he got hooked.

“I loved it,” he said. “So much so that, after graduating, I did a couple of apprenticeships building mandolins, then violins.”

Only, as a passionate guitarist more into rock and roll than bluegrass or classical, by 2000 the 20-year-old understood he was barking up the wrong instrumental tree. “I decided I needed to start building guitars,” he said. “And the moment I gave up the other stuff and headed down that path, something just clicked—I knew this was going to work; I was going to make my living building acoustic guitars.”

Calhoun quickly translated his inspiration and ambition into entrepreneurial savvy by enlisting the help of Randall Ray, a childhood friend, experienced guitar maker, and soon-to-be co-founder of Rockbridge Guitars. “I wanted to bring someone onboard who was more established to help me learn and get on my feet,” Calhoun said. “Randall did great work and we got along well. He was the perfect guy.” 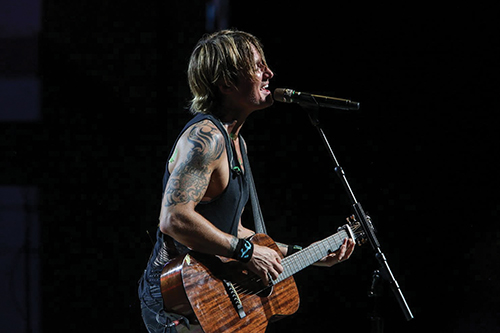 “When Brian approached me, I was making maybe three, four guitars a year,” said Ray. “I knew he did excellent inlay work, so I got him to do an inlay on a guitar I was building for somebody and the whole thing just sort of grew organically from there.” What Ray means by “grew organically” is that, in two years, Calhoun had convinced him to go into business full-time. “Brian kept nagging me about turning the ‘hobby’ into a profession,” he said. “Looking back, it seems completely crazy—I guess he was just too young and stupid to know you’re not supposed to just up and easily be able to do this for a living!”

In two years’ time, the duo had experimented and developed an entire lineup of prototypes and were committed to going pro. Forming Rockbridge Guitars, they relocated and set up shop in the downtown Charlottesville studio they still call home today. But doing so came with a caveat, an oath to pursue the road less traveled; that is, to do their own thing. “A lot of builders—and it’s especially true for hobbyists—set out to try to make their guitars sound like an old Martin, Gibson, or whatever,” said Calhoun. “But what Ray and I wanted to do was different. We were determined to build guitars that were unique and absolutely our own or die trying.”

What exactly did that process entail? When fielding that question the guitar makers tend to respond in one of two ways. Approach number one: highly technical geek-speak peppered with lexical references that make sense to few aside from fellow luthiers. The second approach is abstract, philosophical, rife with mystery, and kind of like reading an ancient alchemical treatise.

“The process of chasing a sound is notoriously hard to describe,” said Calhoun, carefully weighing and choosing his words. “To put it as simply as I can, we wanted to combine aspects of our favorite guitars, as well as our favorite guitar sounds from our favorite albums, and then somehow add some ideas of our own. It was a time-consuming process—an obsession really. But bit by bit we got there.” 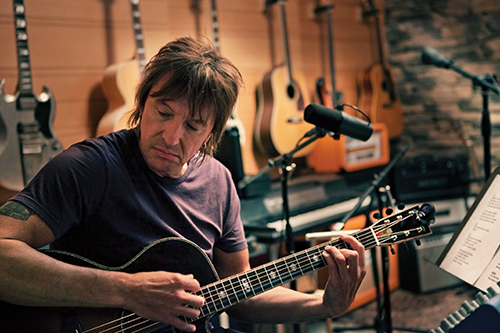 Whatever the magical formula was, it worked. The guitars were golden; like a Taylor or a Martin, a Rockbridge had its own sound. “This is one of the best sounding new guitars I’ve ever played,” wrote the editor of Flatpicking Magazine, Dan Miller, in an early, gushing, laudatory review. And he wasn’t the only one that felt that way. Indeed, the sound was making big waves (no pun intended). Within a year, despite having not so much as a penny invested in advertising, the company booked over a year’s worth of orders. “I’d carry a guitar around bluegrass festivals and ask the players if they’d like to pick a tune or two,” said Calhoun, describing his efforts to get the word out. “At first, they’d kind of groan, but then they’d play the guitar and be blown away. I got a lot of orders that way.”

In fact, flatpicking bluegrass legend Larry Keel purchased his Rockbridge in just this manner. “I think Larry bought the fourth or fifth Rockbridge we made,” said Calhoun, “which gave us a huge, huge boost.” 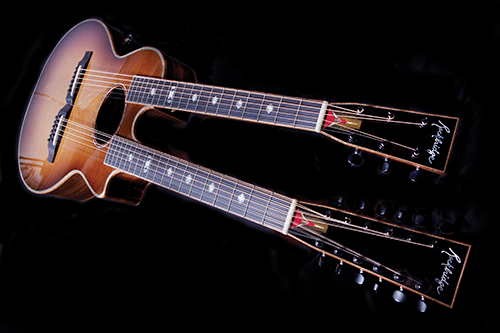 Another such bolstering came when Dave Stewart of Eurythmics introduced the company to the rock world. “Pretty soon after that happened, Dave Matthews ended up buying one,” said Ray. “Then Jason Mraz saw him playing it and got one. Then Richie Sambora saw him on The Tonight Show playing his and got one, too. … The whole thing just snowballed. It was this amazing domino effect.”

And for good reason. According to those who play them, a Rockbridge is like no other instrument available. “When I was looking for a second guitar to compliment my 1942 Gibson J-45 banner-head, I’d heard that Brian and Randall were building these amazing modern-vintage guitars and decided to give them a try,” said Bob Miner, who is a Nashville session musician and guitarist for Tim McGraw. “When the guitar arrived, at first I was blown away by the looks, but then I played it and realized it was the best new guitar I’d ever played. Period.” In fact, Miner was so impressed by the guitar’s tone, having had it delivered straight to the studio, he played it on two Tim McGraw tracks that very day. “Of the few great vintage guitars I own and love, my Rockbridge is every bit as good as my ‘old girls,’ ” he said. “It’s a work of art and I’m definitely proud to play it. I can only imagine what it’ll sound like in the years to come.”

In that last line, Miner broaches a subject Calhoun and Ray take very seriously. While the two have made a name for themselves selling instruments to stars, when asked about the acclaim, the founders shrugged. While they enjoy the notoriety, above all else, they’re hooked on the idea of building handmade heirlooms that will be handed down from generation to generation. “Every guitar we make is a custom work of art,” said Calhoun. “We made a guitar for a guy that had us put his father’s ashes inside the neck. He’ll wind up passing that guitar down to his kids, and hopefully they’ll pass it down to theirs, and so on. So, for me, that means more than anything. That’s what really matters the most.”