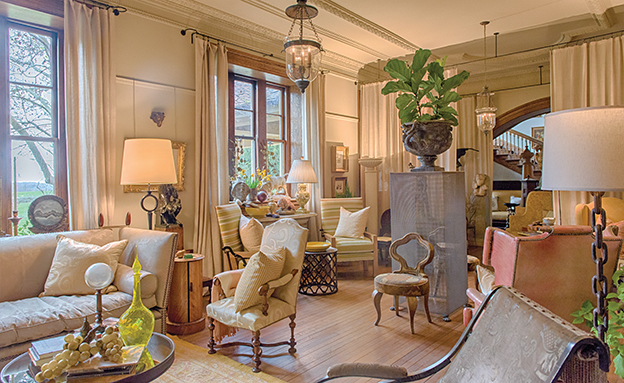 The great hall, used as a ballroom when the house was built in 1907, now serves as a canvas for Dixon to showcase his design vision. By Jaclyn Dyrholm

“What I see when I look out the window, I want to see inside as well,” says Barry Dixon, the world-renowned interior designer and owner of Elway Hall in Warrenton. “That tethers home to place; that’s my mantra. What could be more inspirational, more indigenous from a design perspective than the Virginia sky, my backyard, the history of the land?” 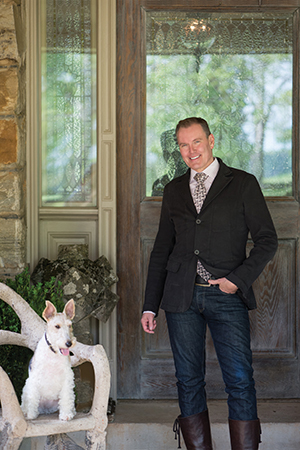 Barry Dixon with Dinah at his welcoming front door. By Jordan Koepke

Set on nearly 300 acres of luscious, bucolic hunt country, the grounds of Elway Hall are beautiful to behold, and teeming with inspiration for the designer. The Edwardian house was built in 1907 as a wedding gift from West Virginia senator and oil baron Johnson Newlon Camden. With 10 bedrooms, 17 fireplaces, and nearly 20,000 sq. ft., the residence was quite the gift to his newlywed daughter, Annie, who is immortalized—surrounded by hummingbirds—in the two-story Tiffany window above the grand staircase. In the 17 years Dixon has resided in Elway Hall, he has opened the doors to Virginia’s Historic Garden Week three times, and holds the record for the most visitors in a single day.

Dixon, who is only the fourth resident in the estate’s 110-year existence, opted to alter very little of the home. Changes were made to the kitchen, the master bedroom suite was expanded, and a swimming pool, replete with a gorgeous view of the Blue Ridge Mountains, was installed. His reluctance to change the structure and layout of the home stems from his deep reverence for stewardship and the obligation a homeowner has to preserve the house’s history.

“Anyone who owns an old house is a steward. In a way, the house owns you. You take care of the home during your time there, then you pass it on.” He’s made minimal changes to the surrounding landscape as well, and he’s right to do so: with such astounding natural beauty all around, why disrupt the pristine countryside? Rather than impose design on the grounds, he prefers to bask in and draw inspiration from the pastoral setting.

“There is a dreamlike quality to the Virginia Piedmont that permeates every project we do here. It comes right through the window and into the room. It’s very important to link design to place,” he says, reiterating his mantra. Glancing through his high-end signatures lines—a series of paints with C2, fabrics with Vervain, home furnishings with Arteriors—one senses that rural reverie throughout Dixon’s work. Hay bales’ spirals are found in his wallpaper, Angora sheep inform his fabrics, a farrier’s anvil inspires a side table, and his paints glisten with names like “Fauquier Spring” and “Warrenton Summer.” One realizes in his vision the deeply rooted imagery of the Piedmont. 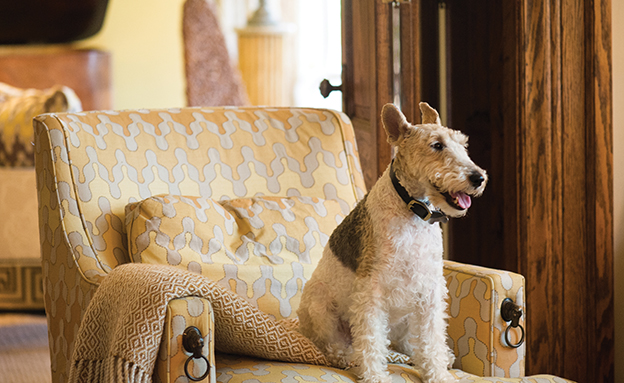 Dinah perches on the Middleburg chair by Tomlinson; Dixon was inspired by the town’s hitching posts to incorporate horseheads into the design. Draped over the arm is a mohair blanket woven from Angora goats born, raised, and shorn on Elway Hall’s farm. By Jordan Koepke

His vision as a designer, which he describes as “layered, relaxed, and timeless,” has earned him recognition and acclaim from Veranda (which bestowed upon him the honor of 2010’s Master of Design award), Traditional Home, Elle Decor, Architectural Digest, and LUXE magazines as well as appearances on Good Morning America (where he appeared alongside one of his clients, Diane Sawyer), HGTV, and the Style Network. The immense praise his products have garnered stems from his seamless intertwining of luxury and functionality, abstraction and familiarity, tradition and modernity. Barry Dixon’s Elway Hall is remarkable, a flawless model for anyone looking to add a touch of the Piedmont’s aesthetic to their home design. As Dixon would say, “Everyone deserves their own bespoke home … their unique realm for living.”