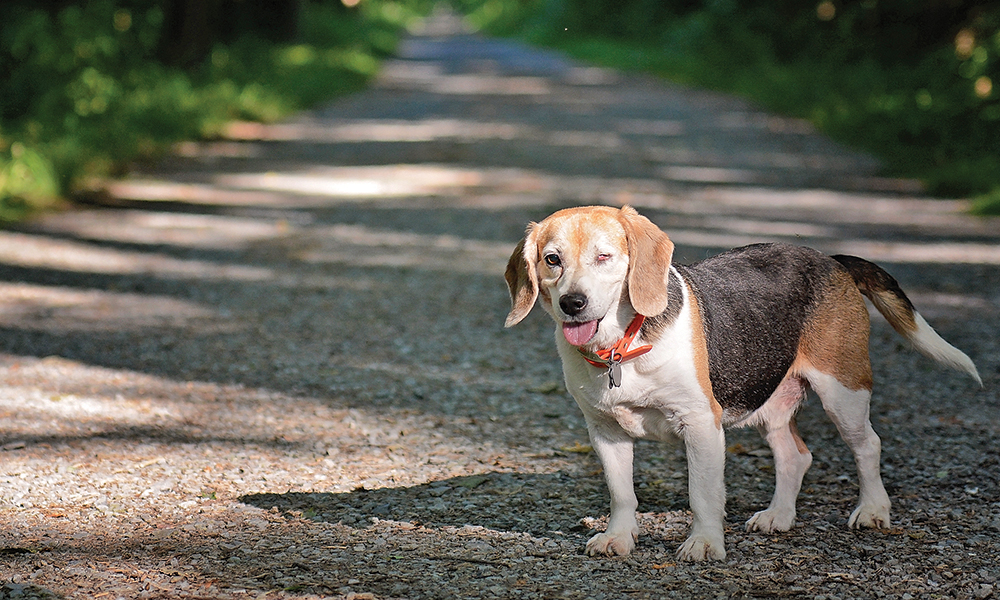 For this pup, a new life grew out of a hopeless situation.

A roaring fire fought back the dark chill of late November in rural central Virginia. The surrounding woods, quiet most of the year, echoed with laughter as friends talked strategy, traded insults, and passed bottles. This is Deer Camp. And the men stoking the fire have been coming to this spot on opening weekend of rifle season for years. Each fall, one or two new faces are added, and old friends sometimes miss it (acceptable reasons are the birth of a child and…actually I think that is the only one).

On this night, as the last stragglers worked their way back to camp from tree stands deep in the woods, an unexpected visitor arrived. Trotting up the driveway with cool confidence like he owned the place, drawn by the light and laughter and the aroma of grilling meat, was a Beagle. He wore a collar but no tags. Black and brown and white, with ears slightly too big for his head, he was a typical Beagle. In these parts, there are clubs that hunt deer with dogs, and the season for dogs opened the same weekend. But the nearest club used Walkers, not Beagles, and all those dogs wore GPS collars.

He seemed fed and cared for and, apart from one noticeable malady – he was one eye short of a complete set – he seemed in good health. The group assumed he knew both where he was and where he lived and preferred the former at the moment. He ate table scraps, drank fresh water, mingled with the other dogs in camp and spent the night in the warm cabin. The next morning, in the rush of tents and tables being broken down and trash being picked up, he wandered off the way he came, and was gone.

A year passed and again on opening weekend, pickups rolled into camp. That first night was quiet with many of the group scheduled to arrive early the next morning. But still there was a fire, of course, and it was stoked until sparks rose to the tops of the trees surrounding the clearing. As the small group gathered in the glow, they were visited again.

The one-eyed Beagle, in no perceptible hurry, walked up the driveway and past the cabin. He took his place in the circle of men and sat facing the fire, as if to say, “Has it been a year already?” Like the rest of the hunters, he ate, drank and snored for two days. Then, just as before, he wandered off unnoticed on Sunday, lost in the bustle of packing.

By the third year, the arrival of their curious friend was fully expected. And when he sauntered up the drive this time there was a new hunter in camp. Pete was new to the group and had heard the stories about the recurring visitor, but Pete was there to hunt, and spent every available hour of the weekend in the woods. So he didn’t give a lot of thought to the extra dog around camp begging for handouts.

On the first day of the fourth year, Pete came back from hunting and the dog was already in camp. His condition was alarming. He had lost fully half his body weight from the year before and was barely recognizable. He limped so badly his back legs dragged behind him. He was utterly filthy, completely covered in fleas and ticks. He was near death. Pete gave him food and water, and wrapped the squalid dog in his warmest hunting coat at night.

Sunday morning was so cold Pete woke up and couldn’t go back to sleep, so he went hunting. He was the only one in camp to make it into the woods that day, and was rewarded with the biggest buck of his life.

There were lots of words not being said as the guys packed up that afternoon. Whoever was originally taking care of this dog was clearly no longer doing so. And while it was remarkable that he had survived in woods thick with coyotes and other perils this long on his own, not one of the hunters felt he would even survive the night. Pete didn’t have the heart to let it happen. If their brief, seasonal companion was not long for this world, he thought, it could happen either with terror in the jaws of a coyote, or with comfort in the arms of a friend in a clean, warm vet’s office. Pete took the dog home.

For three hours he drove, a trophy buck in the back of the truck and a reeking bag of bones curled up on the passenger side floor. Each time he checked to see if the dog was still breathing Pete could see fleas jumping off the dog onto his coat.

When he finally got a signal on the road he made one call to his wife, Claudia, to tell her to prepare for their guest, and another to the vet, making an appointment for first thing the next morning. When the pair got home, Claudia saw the dog and named him Herman. No discussion. Herman it was. Their first priority was a bath. Their second priority was another bath.

Pete told the vet if Herman had to be put down he would of course pay the cost. And in one last bit of due diligence to find his first owner, he was scanned for a microchip. There was none. He was bombed for fleas and ticks before he could even be examined, then was given a full battery of blood work tests and X-rays of his spine and rear legs. He was tested for parasites, Lyme and heartworm and had them all. He was weak and malnourished and his teeth were rotten. He weighed ten pounds. The vet put his age at seven, at most. “But a hard seven.” 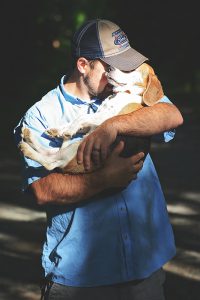 At home, he was given a space in an unfinished basement room. He slept his days away, recovering. His teeth were so bad and his stomach so unaccustomed to food he could only be given a spoonful of wet food at a time. Two weeks after Herman’s arrival, while Pete and Claudia were lying in bed they commented that the neighbor’s dog sure was loud that night. They looked at each other in simultaneous realization that it was Herman from the basement, who hadn’t made a single sound since he arrived. He was finally starting to come out of it.

Over the coming months his coat grew healthier, his energy increased and his personality started to shine. Claudia, who works out of their house, smiles at him all day. “I call him my co-worker,” she says with another smile. They use words like “friendly,” “stubborn,” “funny,” “mellow,” and “perfect” to describe him, and can’t imagine not having him in their lives.

At the same time he was getting healthy, Pete and Claudia had to work on training, as Herman had none. He wasn’t even housebroken. Everything from walking on a leash to the most basic obedience commands was all new to Herman.

Five months after his arrival, Herman weighed 20 pounds and was healthy enough to undergo surgery. He had 14 teeth removed. “I honestly didn’t think he’d make it,” Pete says with a hint of worry on his face, recalling the transformation from near death to a thriving, fun-loving dog. “Now I feel like he’s going to live forever.”

Herman now follows Pete everywhere. He loves riding shotgun in the truck, and if Pete gets out even to pump gas, Herman is there at the window, never taking his good eye off the man who saved his life.