Hungry bears come around and shake the peaches off the trees.  Deer munching on the bark can kill the trees. Moles eat the trees’ roots.  Root rot can set in. Untimely frosts can zap peach blossoms. An early freeze can kill the fruit.  One year it’s too wet; the next year, too dry. “It’s a huge gamble,” says Cynthia Chiles, Retail Operations Manager of Chiles Family Orchards in Crozet, two miles off Route 250.  “We love what we do. That does not mean that every day is a picnic,” she comments. 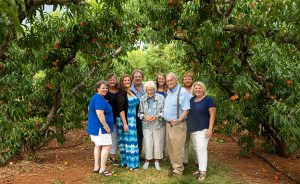 Five generations of the Chiles family have managed three orchards: the Carter Mountain Orchard near Charlottesville, the Spring Valley Orchard in Afton, and the Peach Orchard in Crozet.  In 1912, Henry Chiles planted the first peach trees on the Crozet land, today 150 sprawling, green acres of peach trees. The family has a total of 1,500 acres in Albemarle County in peaches, apples, nectarines, wine grapes, strawberries, blueberries, pumpkins, cherries, and flowers.

After the first Henry in 1912, his son, Henry, ran the orchard; then his son, Henry, did it; today, Cynthia’s dad, age 83, dubbed “Henry the Eighth,” is the general manager.  Cynthia and her brother, Henry the Ninth, fourth generation, and her nephew, Henry the Tenth, fifth generation, have a role in the orchards. In all, nine family members are involved today.  “We’re not big on titles,” she notes.

At the Crozet peach orchard, rows and rows of 25 to 30 different varieties of peach trees spread out at the base of the Blue Ridge foothills, as far as the eye can see.  Central Virginia is on the northern edge of the U.S. Department of Agriculture’s peach planting zone. Most U.S. peaches are grown in South Carolina, Georgia, and California, but “peaches do well here,” Cynthia maintains.  The mountain slopes “break the weather,” making it more temperate and hospitable for peaches. 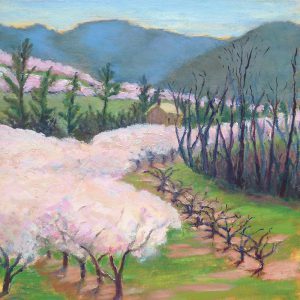 The nearly 80 full-time employees work year-round and do “a lot of caretaking,” she explains, because peach trees need constant tending — pruning, thinning, spraying, fertilizing, weeding, and mowing under them.  They buy one-year-old peach trees from a nursery and in two or three years, a tree will bear fruit. It takes five or six years for a full crop. A good tree will produce peaches for up to 25 years, and they plant trees in stages so that there will always be healthy, productive trees.

Peach harvest starts in mid-June and lasts into mid-September.  In the three orchards, “We are always harvesting something,” Cynthia says.

For the summer and fall harvests, employee ranks swell to 500 to help serve the people who pour in from the local area and towns like Charlottesville, Harrisonburg, Stuart’s Draft, and Richmond.  The family welcomes visitors. “Ninety-five percent of our customers appreciate what we do,” Cynthia believes.

Most of the peaches go from the orchards’ packing facility to grocery chains like Kroger, Wegmans, Food Lion, Whole Foods, and Harris Teeter.  Pricing can be quite volatile and competitive, depending on supply.

Cynthia’s mother, Ruth, started selling peaches and other products from a cigar box and roadside card table in 1974 when a freeze reduced the fruit harvest to the point that they could not hire seasonal pickers or packing house staffers.  Intended as a one-time event, pick-your-own, a new idea at the time, was born, and it proved to be popular. The next year, as June approached, phones began ringing with people asking for pick-your-own dates. Today, it’s a popular outing, especially for families.  There’s no entrance fee and customers are charged by the pound picked.

The Crozet orchard also has a market, café, pavilion, and tasting room open to the public from April through Christmas.  Youngsters flock to the ice cream window and kids of all ages slurp peach slushies and fruity milkshakes. “Those peach milkshakes, they are my guilty pleasure,” quips Lindsay Dorrier of Bold Rock Cider who helps at the cider and wine bar.  Customers can nab delicious cider donuts, muffins, scones, and cupcakes made in the farm’s kitchen. Jams, jellies, sauces, vinaigrettes, and other jarred goods come from Shawnee Canning Company in Cross Junction. 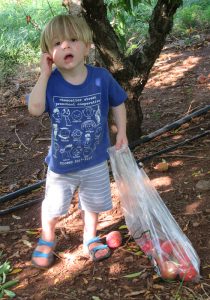 Callum McElroy in the orchard. By Glenda Booth

From April through September, Friday nights bring music, “Orchard Jams,” that ring out from a stage from 6 p.m. to 8:30 p.m.  The free, 30-seat, Crozet Trolley chugs in with customers. From April to December, there’s a Sunday morning, all-you-can-eat pancake breakfast with fresh, fruity seasonal toppings, served with biscuits and gravy.

Family members have been part of the larger agri-tourism picture too in what Chiles calls a “micro-industry.”  Her father was president of the North American Farm Direct Marketing Association and served on the Board of Directors.  He was once President of the National Peach Council. Family members participate in organizations like the Farm Bureau and convention and visitors’ bureaus.

Farming comes close to being a religion for the Chiles clan.  “We love the land and making it productive,” Cynthia offers. “My dad started working in the orchards when he was 17.  It’s in his blood. We love to grow things. It’s our heritage, what we’ve always done.”

But it’s more than a family tradition or deeply-held calling that drives them.  Cynthia also sees the orchards as a way to give youngsters an outdoor farm experience.  “Most of our visitors are families with kids,” she says. “Most of them don’t have Grandma’s farm to go to so they come here.”  Given the squeals coming from the orchard last June, it’s clear children delight in snapping peaches off the trees, filling their bags, dying to take a chomp.