Walking a beloved dog down the long road to recovery 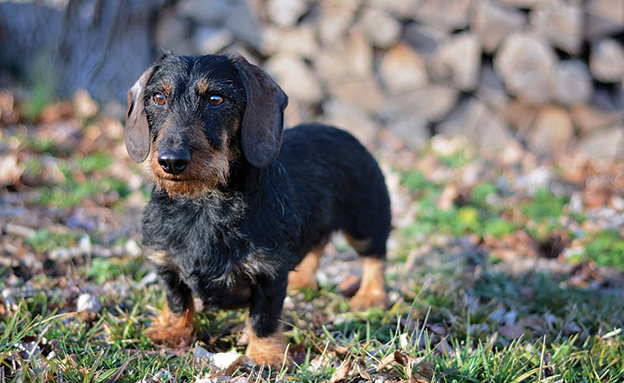 Winslow, exactly four months after surgery, looks happy and healthy. While not yet four years old, he has picked up a few grey hairs around the whiskers since his surgery. The stress of the episode can do this both in the dog and his owner.

I sat, restless, in the private waiting room and stared at the door, willing it to open.  When it did, Stephanie, a vet tech for the neuro team at VCA Southpaws Veterinary Specialty and Emergency Center in Merrifield, walked in holding my three-year-old Wirehaired Dachshund, Winslow.  He seemed thin, fragile, and a little foggy. She passed him from her arms to mine and I held him nervously.

There was an iPhone-sized rectangle shaved into the middle of his back with a crisp, tidy scar running down the center.  I pressed my nose into the wiry coat of his neck and breathed in deeply. He had a distinct, hospital smell I didn’t give much thought to initially, but in the hours and days that followed, picking him up countless times, I got used to it.  Fond of it, even. It was not a particularly pleasant aroma, but I associated it with the joy I felt at being reunited with him after three agonizing days of wondering if he would ever walk or run again. By the time I realized I had grown to genuinely love it, the scent had faded.

It was Monday morning.  The previous week my wife and I noticed Winslow wasn’t right.  He wasn’t interested in food and was in obvious pain. We brought him to the emergency vet, as nothing ever goes wrong with any of our dogs during regular business hours.  They thought it was his back, gave us some pain meds and told us he should take it easy to take it easy and follow up with our vet. But when he was having trouble walking the next day, we were referred to Southpaws.  The next morning he would have an MRI and, if needed, surgery.

We arrived early and checked in.  I stared at Winslow, my mind and heart racing.  Before long we were approached by a smiling, confident woman who knew who we were without asking. She introduced herself as Dr. Talarico, the neurosurgeon, and took us to a private room where she examined Winslow.  She was smitten with him, and kept commenting on what a gorgeous, sweet dog he was, which put me at ease. She was confident she knew what the MRI would show, and just as confident she could fix it with surgery. Her manner was so reassuring, I began letting myself share in her confidence that whatever needed to be done, we could do it.

Intervertebral Disc Disease (IVDD) is a condition unfortunately common, and occurring at a younger age, with Dachshunds and other short-legged breeds than in other dogs.  It’s been described to me in this way: picture a disc like a jelly donut. A disc affected with IVDD loses moisture and becomes calcified, so the spongey, ‘donut’ part of the disc hardens.  Then, either through sudden compression as with jumping off a piece of furniture, or just through everyday use, the disc herniates and the ‘jelly’ part of the donut breaks through the disc material, putting pressure on and even bruising the spinal cord.  This is what was happening with Winslow. Disc material was putting pressure on his spinal cord, interrupting the signal to the point he was losing control of his back legs.

Dr. Talarico took him back for the MRI and prepared us for the almost certain inevitability that he would need surgery immediately thereafter.  When she returned, the first thing she said was, “Wow!” The herniation was so massive, she said, she couldn’t believe he wasn’t screaming and biting her as she was examining him.  She told us he would almost certainly be paralyzed by the next day. He was already being prepped for surgery. We took care of some paperwork, and left him in the capable hands of the neuro team.  “He’s a tough little guy,” Dr. Talarico said. He would need to be. 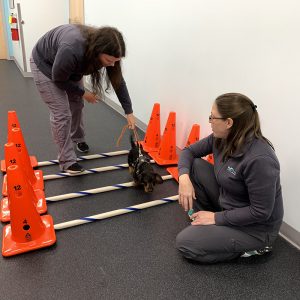 Physical therapy included cavalettis, walking over a series of spaced out poles. This increases awareness in proprioception, which is the sense of knowing where your limbs are and what they’re doing. That sense becomes interrupted with the injury and surgery.

That afternoon she called me to let me know he had gotten through surgery very well, and that the spinal cord showed just a small amount of bruising.  She was confident he could fully recover, but there was a long road ahead. He was on pain medication and anti-inflammatories, and she wanted to keep him there through the weekend.  This gave me some time to set up a few things like extra crates in rooms I’d be in so I could move him to be near me whenever possible. Through the kindness of some friends I was loaned or given crates and pens for what would be at least eight weeks of strict crate rest.  He was only to be carried outside to a small pen periodically for bathroom breaks.

We have five other dogs in our house, including a brand new rescue that arrived, due to circumstances beyond our control, on the same day Winslow returned from the hospital.  But dogs adapt to their situations remarkably well, and the others seemed to understand that Winslow was not to be bothered in his crate.

It can take eight weeks or more for the hole the disc material passed through to heal and close.  During that time, it wouldn’t have taken much to re-injure his back. Over the next few weeks, he started feeling better, and couldn’t have understood why he was being restricted so. But dogs are remarkably adept at adjusting to a “new normal.”  It feels like they know there must be a reason for the changes made to their routines.

Truthfully, I think I had a harder time than he did.  As he grew stronger and healthier I was still terribly worried about him, and my anxiety both about how his current injury is healing and how to prevent future problems weighs on me still.  When we were finally cleared for short, leashed outings, I stared at his back legs as I walked behind him. It took me a while to realize I wasn’t even enjoying the time out on a walk with him I had longed for because I was obsessing over every missed step or funny hop or odd way of standing.  I was flooded with doubt. Is he lethargic or just fatigued? Is he shaking from pain or excitement? Is he unstable or did he just slip? I began to doubt every way I thought I knew my dog.

I took him back for a follow up visit with Dr. Talarico to make sure everything was on track, and she was thrilled to see him again.  “From the moment I laid eyes on this little guy, I knew he was perfection from the inside out,” she said. “He has eyes that touch your soul and a personality to match.”  Also, and more importantly, she declared he was “neurologically perfect.” I was still to take it easy with him, but it was time to transition from protecting him to rebuilding him.  And to rebuild my confidence at the same time.

We went to a physical therapist who gave us some exercises to practice.  On our first visit, the doctor there kept running her hand down the length of Winslow’s scar.  Dr. Talarico, not wanting to mar such a handsome dog with an ugly scar, took great care with his incision.  She used internal sutures and glue instead of staples to bind the tissue tightly and neatly, and her skilled work was admired by the physical therapist.  “That’s the most beautiful scar I’ve ever seen,” she said.

Per doctor’s orders, we gradually extended our walks to build muscles unused for months.  These walks together, the constant observing of every move, and carrying him up and down stairs so many times a day brought us closer together than ever.  As he grew stronger we made more changes in our home. I blocked off an area of my basement office where he can hang out safely with no furniture in reach to jump on and off.  My good friend Jason, a fellow Dachshund owner who also had a dog suffer from IVDD, built us a beautiful ramp so Winslow could safely go back to sleeping on the bed with us. And we have a plan for some changes to our front porch and yard that will eliminate stairs.  Our new normal is finally starting to feel normal. And I felt like I was getting my dog back.

Winslow will return to being an active dog, minus stairs which will remain off limits.  He will get back to hiking, hunting, kayaking, and blood tracking. And for fans who enjoyed watching Winslow make it to the finals in last year’s Oktoberfest Wienerdog races, you’ll be happy to know he is not retired from racing.  In fact, his new fans at Southpaws are even planning on coming to cheer him on this fall.

There is nothing good about IVDD.  Nothing. But if I’ve learned anything, if the crushing weight of the fear and stress and heartbreak and anxiety has formed a tiny diamond at my core, it is this: when I walk with Winslow now, every single step he takes brings me joy, and I will never again take his health for granted.