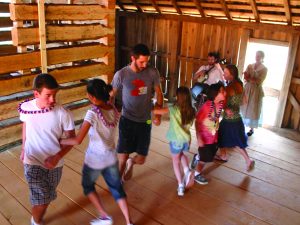 You might find yourself rambling around a “holler,” sitting on a front porch mesmerized by lightning-fast bluegrass music, or high steppin’ it at an impromptu jam session along Virginia’s Crooked Road Music Heritage Trail, a 330-mile, mostly two-lane road that winds around southwest Virginia west of Roanoke. Dubbed by promoters as “a place of beauty, a place of song,” it crosses the Piedmont plateau, rolls through the eastern slopes of the Blue Ridge Mountains, winds through no-stoplight towns, and twists through coal country. The state legislature designated it Virginia’s Heritage Music Trail, “where America’s music began and continues.” The Trail made Lonely Planet’s coveted list of the five best trips in America.

The Crooked Road region includes 19 counties, four cities, and more than 50 towns, some a dot on the map. Around 100 miles of the trail track U.S. 58. There are nine music venues and many informal sites of music jams, festivals, and concerts. A leisurely drive with frequent stops is the ideal way to get the full flavor—acoustic, visual, gastronomic, and social. Across the entire 330-mile trail, some sites will seem a “fur piece,” as locals put it. “Everything takes an hour to get to because you have to go around the mountain,” explained Diana Etherton, former owner of Scott County’s Sugar Maple Inn. 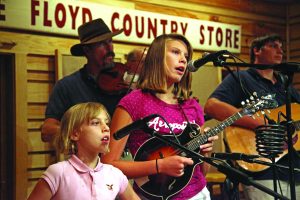 Country, bluegrass, and gospel music seem to spring up out of the hills and hollers, some at a high-octane pace and some poignantly plaintive. It zings off front porches, rises from front yards, echoes off the ridges, and spills out of VFW halls. “You never know when you’ll have to dance,” a Gate City lady commented, explaining that she always has her clogging shoes in the car, ready to click and clack. Bluegrass Hall of Famer Ralph Stanley said, “Growing up in the mountains, music was everywhere.” It still is.

It’s a region of festivals, jam sessions, and spontaneous pickin’ and singin,’ traditional American music played on fiddles, clawhammer banjos, dobros, dulcimers, autoharps, washtubs, washboards, and sometimes spoons. The warp-speed tunes rouse foot-stomping, clickety-clacking cloggers, women in colorful, twirly skirts, and their partners. Some songs long for days gone by, loves lost, romance gone bad, relatives in the heavenly beyond, or coal mining’s glory in the old days. “It sounds different when you sing up here on the Ridge,” country singer Gillian Welch has observed. Southwest Virginia has spawned some of the greatest names in American music, like the Carter Family, Ralph Stanley, Jim and Jesse, and Dock Boggs. 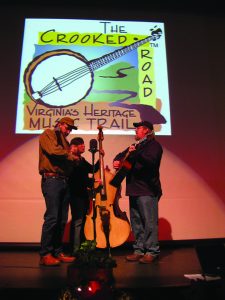 It’s also a region for leisurely meanders around the mountains, between the ridges, and through the rolling foothills, valleys, forests, and limestone ledges. It’s a bucolic landscape of rippling streams, split rail fences, graying tobacco barns, and churches of every ilk with the Blue Ridge Mountains ever in the background. There’s plenty of delicious down-home cooking, from fried chicken to fresh apple pies, and many friendly “Hi y’alls!”

Just west of Roanoke, the Blue Ridge Institute and Farm Museum on the Ferrum College campus is a gateway introduction to mountain folklife and history. Exhibits explore farming on a recreated Virginia-German far mstead, mountain clan life, pottery making, and the daring exploits of infamous moonshiners.

Farther west is Floyd, known for the old-timey Floyd Country Store, built around 1913. Every Friday night a rollicking jamboree erupts, which in the summer spreads out into the alleys and parking lots. Here shoppers can pick up preserves, rolling pins, bib overalls, and sweet potato biscuit mix.

The Carter Family Fold in Maces Spring is a living memorial to the legendary “first family of country music” whose cheery theme song was “Keep on the Sunny Side.” A. P. Carter, the patrirarch of the clan, “stands with Irving Berlin as a major force in American composition” and his wife, Sara, was the “greatest female country lead singer of all time,” wrote the late Virginia folklorist Joe Wilson. The Fold is a 900-seat, unpretentious, barn-like structure tucked into the hillside. Every Saturday night people of all ages, singles and couples, sweep onto the cement floor to waltz, clog and flatfoot in their jingle-tap shoes. The dancing sounds like thousands of synchronized crickets pulsating to ditties like “I Got a Mule to Ride” and “Orange Blossom Special.” Johnny Cash and June Carter Cash sang here. Johnny performed his last two shows at the Fold.

The compound includes the nineteenth-century cabin where A. P. and 10 others were born, as well as  the Carter Family Museum showcasing handmade performance dresses, including June’s dress and Johnny’s suit worn when they performed for President Richard Nixon.

For $5 at Norton’s Country Cabin II you can hear locals play bluegrass, country, and old-time music every Saturday night or have a clogging or line-dancing lesson on a hardwood dance floor. Here, in the heart of coal country, loaded coal trucks barrel down narrow, serpentine roads amid sharply rising, kudzu-carpeted walls. Emerge from a switchback and you might see a coal train chugging black “gold” down the mountain. Little hamlets sprout country churches with names like Liberty Church of Christ, Holy Pentecostal, Primitive Baptist, Missionary Baptist, Freewill Baptist, Church of God, and Church of the Gospel of Jesus. 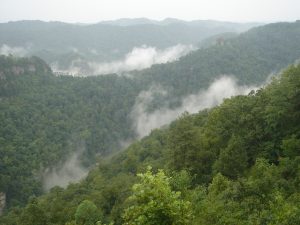 Visitors like to watch the mist rise up from the canyon in Breaks Interstate Park. By Glenda Booth

Big Stone Gap, population 5,700, was made famous by Adriana Trigiani’s fictional trilogy of the same name and a 2014 movie depicting love and life in small town Appalachia. The town visitor center is in an 1870 Pullman railroad car that didn’t last long “because it waddled down the tracks,” according to one docent.

The free Harry Meador Coal Museum explores how coal historically was the lifeblood of the region, what corn is to Kansas, providing paychecks to “the men of the deep.” Tools and mining machinery displays, like the big yellow continuous miner outside, demonstrate the mechanics and some of the dangers of coal mining.

Big Stone Gap’s Southwest Virginia Museum, housed in a nineteenth-century sandstone-limestone mansion, revisits the pioneers who penetrated the wilderness, white men and women with guns, wooden churns, and washboards, with a token nod to Native Americans. One intriguing exhibit introduces the mysterious Melungeons, people who did not fit into any traditional racial category.

The town of Appalachia next to the railroad tracks boasts, “Born from Coal, Survives through Spirit.” The annual Coal Railroad Days festival, the first Saturday of August, is the place to pick up a turkey caller or a handmade basket and to munch on deep-fried oreos and deep-fried dill pickles. A drive through the grungy, one-street town of Dante (pronounced “Daint”) offers a glimpse of the day-to-day struggles in Appalachia.

Breaks Interstate Park, straddling the Virginia-Kentucky line, is known as the Grand Canyon of the South, the largest canyon east of the Mississippi River, which is 250 million years old, five miles long, and 1,600 feet deep. The visitor center offers a tutorial on the flora and fauna of the area and showcases a moonshine still with a “double worm,” a reminder of a major “industry” of the deep woods and back hollers. Some raft the whitewater rapids and some hike, but the best part of this park is relaxing on a balcony overlooking the gorge and watching the gauzy mist slowly rise and gently unveil the craggy rock faces while turkey vultures glide on the drafts. 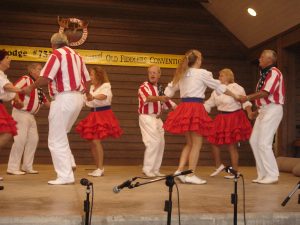 Clintwood’s most famous hometown boy who made good is Ralph Stanley, honored by the Ralph Stanley Museum. His high-lonesome, mournful, tenor voice has enchanted people worldwide and eerily penetrated the Coen Brothers’ film, O Brother, Where Art Thou?, a tale about three convicts loosely based on Homer’s The Odyssey. The museum has recordings and artifacts from Stanley’s tours, singing what was in his heart and soul. “I just sing it the way I feel it,” he said. Stanley, a clawhammer picker and Bluegrass Hall of Fame inductee, died in 2016 at age 89.

Galax is a flowering plant and a southwest Virginia town, but to country and bluegrass musicians and fans, Galax means six days of hard-driving music during the Old Fiddlers’ Convention, the oldest and biggest in the U.S. Every August squealing fiddles, twanging banjos, thrumming guitars, accomplished singers, and amateurs provide a virtual non-stop soundtrack on and off stage for the 40,000 fans who descend for competitions, gigs, reunions, and camaraderie. Staged by Moose Lodge 733, this world-renowned event has been held annually since 1935, except for one year during World War II. The biggest name to go on stage usually is Galax native Veronica Loretta “Roni” Stoneman, the “First Lady of Banjo,” who played the toothless, banjo-plunking Ida Lee Nagger on Hee-Haw, a television show last broadcast in 1993. “The professionals can participate, but they’re afraid they’ll get beat,” quipped one of the Moose Lodge’s organizers. Janet Hyler of Aroda likes the fiddlers’ convention because “it gives many talented musicians a chance to showcase their music and meet other musicians from all over the country.”

Whatever the weather, all ages pick and sing into the wee hours between and behind a labyrinth of trailers, trucks, RVs, vans, Airstreams, funky buses, and cars on Felt Park’s fairground. “Here, the 13-year-old boy can play with an 80-year-old grandfather,” said Marc Kinley, a regular from Fort Mill, South Carolina. “Galax is the ultimate,” argues North Carolinian J.K. Godbold.

In “downtown” Galax, Barr’s Fiddle Shop on Main Street is popular for its “pickin’ bench” and handmade instruments, and the nearby Galax Smokehouse is barbeque heaven. The Rex Theater, built in 1939 and since renovated, hosts Friday night’s Blue Ridge Back Roads show, bluegrass music blasted over WBRF 98.1 FM into five states and online. Galax has earned the title of “World’s Capital of Old-Time Mountain Music.” Music reigns.

If you soak it all in along the Crooked Road, sip a little ‘shine, load up on biscuits, gravy, country ham, and pinto beans, chat with the friendly locals, imbibe that fresh mountain air, and get lost in those enchanting bluegrass and country sounds, you’ll likely be as “happy as a dead pig in the sunshine,” as locals would say.