Dave Frey and the festival that transformed the Virginia music scene

Ten years ago, Virginia-based music fans seeking to experience a large-scale, hippie-style festival would have had to travel out of state.
By Eric Wallace 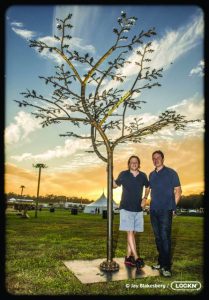 Ten years ago, Virginia-based music fans seeking to experience a large-scale, hippie-style festival would have had to travel out of state. “At that time, if you were looking for a lineup with the biggest jam-bands out there packed into one massive weekend, you’d have to go to an event like Bonnaroo, which is held in Tennessee, or Wakarusa, which was formerly held in Kansas,” says music fan and 25-year-plus Piedmont-area festival junky Brian Chapman. Then came Dave Frey and Lockn’, and all that changed. Held at Oak Ridge farm in Arrington, since opening in 2013 the festival has averaged around 25,000 participants a year and featured droves of iconic artists including Tom Petty, Robert Plant, Phish, Carlos Santana, the Allman Brothers Band, Furthur, My Morning Jacket, Ween, Wilco, Willie Nelson, Phil Lesh, Widespread Panic, and many more.

How did all this come to be? According to Frey, it was a simple matter of fate.

The story opens in Chicago in the early ‘80s when he was playing in a hometown band that’d just had its equipment stolen. “This club owner felt bad for us and threw a benefit, and I went to the local radio station, gave away tickets and got the paper to write it up,” says Frey. “The show sold out and that night the guy who booked for the club quit. The owner turned to me and said, ‘Hey, you did a good job. Can you handle the booking for a couple weeks until I find a new guy?’ ”

Frey said yes. And after five years cutting his teeth on the Chicago club scene, landed a gig in New York City working alongside legendary figures like Ron Delsener, whom The New York Times once referred to as “Rock’s Mr. In Between,” and the late Bill Graham, who in the ‘60s, ‘70s, and ‘80s helped solidify rock music’s position as a driving cultural force through his work with the Rolling Stones, Jefferson Airplane, Bob Dylan, the Grateful Dead, and others. “Ron had given me a job as the junior booker, booking all the smaller bands for the clubs,” says Frey. “I was working really hard, booking about 500 shows a year; it was all I was doing, all day. And then some of those little bands got really big, really fast.” That list just so happened to include groups like Nine Inch Nails, the Black Crowes, and Phish. In other words, Frey was in the right place at the right time.

Pre-show serenity: one of the spectacular view sheds of Infinity Downs amphitheater. By Camden Littleton

Capitalizing on the unexpected success—which Frey insists came down to “persisting until the timing and luck arrived”—in 1992 he founded his own company, Silent Partner Management, which represented acts like platinum-selling Cheap Trick, the Ramones, and Blues Traveler, and then co-founded the Horizons of Rock Developing Everywhere (H.O.R.D.E.) festival with John Popper in 1992. Using Lollapalooza as a template, H.O.R.D.E. was envisioned as a way to expand the reach of emerging artists that were then collectively formalizing the rocking, improv-driven focus of the Grateful Dead and the Allman Brothers into the “jam band” genre. By uniting groups like Widespread Panic, Blues Traveler, the Aquarium Rescue Unit, Spin Doctors, and Phish under the banner of a single touring festival, Frey tapped their combined audiences and sold out amphitheaters that had been inaccessible individually. “There was a meeting in the old Bill Graham offices after Bill had passed where we called together five bands that we knew hadn’t been able to book fair-sized summer tours and we just said, ‘Listen, there’s strength in numbers. Let’s try going out together,’ ” recalls Frey. “Trey Anastasio, Chris Barron, John Bell, Col. Bruce Hampton, and everybody else that was there said, ‘Yeah, let’s do this!’ And it all came out of that one moment.” The result changed the face of rock music in America, laying the groundwork for bands like Phish and Widespread Panic to become the pillars of a revitalized countercultural music scene. 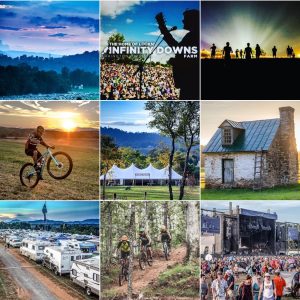 The next major evolution in Frey’s career came nearly 15 years later. Accepting an ambitious business proposal from long-time friend Peter Shapiro in 2008, he migrated from New York City to Charlottesville with the intention of founding the biggest music festival the state has ever known. As the publisher of Relix magazine—basically the Rolling Stone of jam music—and former owner of what may well have been the most famous jam club in America in the ‘90s, Wetlands Preserve in New York City, Shapiro knew the industry inside and out, and was the perfect partner. After spending the next few years preparing, the two chose Oak Ridge as a location and officially began planning the first Lockn’, which was held in September of 2013. With 4,800 acres, a mile-long horse track, Blue Ridge views, forests, fields, and historic buildings dating back to its formation in 1802, the estate was perfect.

“We’d been looking at different places to do it when Michael Allenby—co-founder of the Festy Experience—showed me this site and I was like, ‘Oh my God, this is amazing,’ ” says Frey. “And I think that’s the first thing: you have to have a great place. You’re basically giving people an excuse to go where they’d want to go anyway. … You want to be out in the middle of nowhere but, at the same time, be nearby to everything.”

And Arrington certainly fit the bill. Nestled in the rural hills of Nelson County, Oak Ridge sits just three miles off Route 29, well within driving distance of D.C., Richmond, Charlottesville, and Roanoke. Furthermore, with a major airport in Charlottesville, the site was even accommodating to visitors from afar. 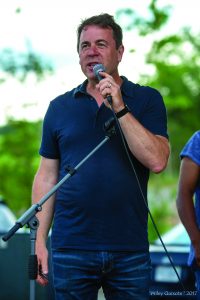 Dave Frey at Nelson County Community Day and the Rockn’ to Lockn’ finale announcing the four local Virginia bands that won a spot on the main stage during Lockn’ Festival. BY WILEY QUIXOTE ©2017

Seeking to differentiate their festival from all the others, Frey and Shapiro chose to present bands one at a time, allowing fans to focus on the music without worrying about what they might be missing at other stages. “You don’t find that at a lot of other people’s shows. There’re these conflicts you get when bands are playing at the same time—you can only check out half of one or half of the other,” says Frey. “So it’s a lot more focused on the music, purposefully. We don’t have 150 bands like some festivals. We only have 25 or 30 bands, tops. … If [a group is] playing this nice mellow song and they get to a real quiet part, you won’t hear, say, Primus rocking out over the hill, y’know? It’s more respectful, I think.”

In addition to the single-band, single-stage approach, Frey and Shapiro chose to standardize major collaborations, which led to 50-year anniversary events for both the Grateful Dead and Jefferson Airplane. Not to mention Frey’s personal favorite, which was arranging for John Fogerty of Creedence Clearwater Revival to play with Widespread Panic in 2015.

And lastly, there was the local flavor angle. “We try to focus on locality because locations have a unique signature: restaurants, beers, things like that,” says Frey. “If we can bring those elements in and feature them, a lot of the people that are coming in from different parts of the country or from around the world will experience that.” Mainstays included tapping Nelson County’s craft brew and spirits scene or Charlottesville’s wineries, throwing a local battle of the (unsigned) bands contest, and offering farm-to-table cuisine from the region’s top producers and culinary professionals.

Despite losing money the first year and facing a microburst windstorm that destroyed the stage and ravaged the grounds on the second year’s opening day, Frey and Shapiro have stuck with it. Over the past five years, they’ve grown Lockn’ to the point where the event is routinely named by rock- and festival-oriented magazines as one of the top-ten festivals in the U.S. And the duo has no plans of stopping there. “Hopefully, one day we’ll look back and see how this became the New Orleans Jazz and Heritage Festival of Central Virginia,” says Frey. “That’s basically our goal.”