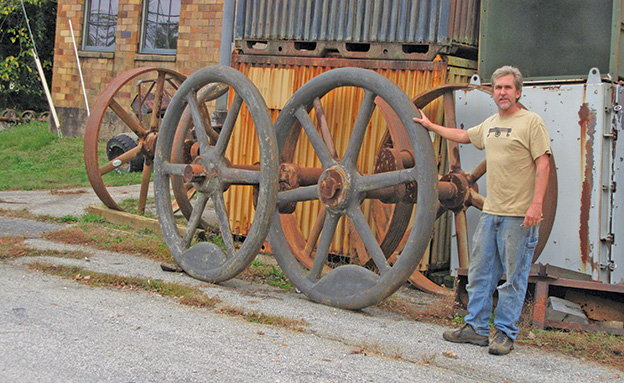 Jeremy Hale and a flywheel from the closed Schuyler Quarry, used to cut blocks of stone into slabs. By Glenda Booth

The Excitement of “Junk”

Chunks of dingy metal, used lumber, rusty machine parts, dilapidated cars, window frames, shipping containers, old flooring, all the detritus of industry are piled high and low, assorted symbols of America’s throwaway society. In what most people would see as useless junk, Nelson County’s Jeremy Hale sees the potential for art, architecture, and things of beauty. “I enjoy taking obsolete and surplus items that nobody wants and turning them into useful, beautiful things,” he explains. “Everything’s exciting.”

From the miscellany of discards filling in his four-building complex, he repurposes. “I give it a new life,” he remarks. Hale can imagine something and then look around for materials and make it or he can study the stuff and create art.

On the bucolic, two-lane, state Route 655, off Route 29 that takes you to Arrington, population 710, you ease around a curve and suddenly, a four-story, 84,000-square foot, blocky, brick building looms, commanding five acres next to the railroad tracks.

This is the home of five businesses run by Jeremy and Jamie Hale, both of whom grew up in Nelson County. The Old Cold Storage Salvage, an architectural and industrial salvage firm, is crammed with the leftover dregs of industry, home building, and life in general — the odds and ends of life that usually are destined for landfills. He collects what he calls “big, crazy, industrial Americana,” salvaged materials like shelving, flooring, metals, tiles, antique tools, machinery, windows, doors, steel, aluminum siding, lumber, safes, fire extinguishers, vehicles, cast iron, and industrial boilers.

The website offers his philosophy: “We reject the disposable nature of our modern culture. Artisanal, high-quality construction can last for lifetimes. Our historic artifacts are worth saving for the future, and it is our goal to save these structures from being forgotten, and to put them to use again.”

As a youngster, he “fell in love with rocks,” started collecting them and as an adult, got the collecting bug big time so at age 49, he is still collecting and making a living at it. Some of his rocks today require a forklift to move them. He loves to rescue materials from auctions, bankrupt businesses, and foreclosures, things like doors, mantels, sinks, windows, lumber, office furniture, and hardware. He scouts for gems when companies close, like a North Carolina furniture company that shut down in Martinsville.

Hale was featured on an episode of “Salvage Dawgs,” a DIY Network television show about two Roanokers who founded Black Dog Salvage, a firm that “upcycles” items from salvage sites, like barn wood, iron, ladders, and doors; entrepreneurs who are Hale’s spiritual kin. Most of his Hale’s sales promotion is by word of mouth. His website invites: “Contact us if you have a project or pieces you would rather save than landfill.”

Visitors to his company are greeted by his “trees,” metal creations with outstretched, branching limbs, made of light posts, former fencing, and house jacks, all welded all together. He converts factory pallets and flooring from the University of Virginia basketball court into tables. He took apart a 1930s fire tower and reassembled it for a bread-and-breakfast guesthouse in Nelson County. He’s making tiny houses from shipping containers. He has a 24-foot “safe bar,” a wooden beverage bar held up by seven abandoned safes. 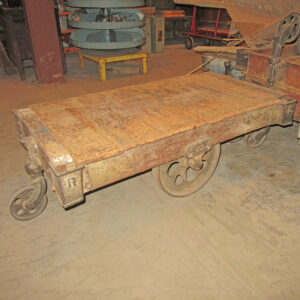 The process of refurbishing old factory carts and converting them into coffee tables. By Glenda Booth 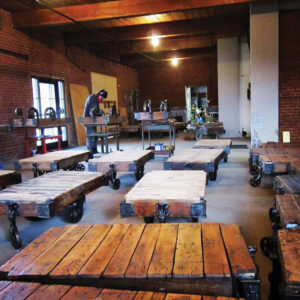 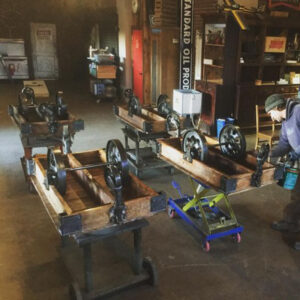 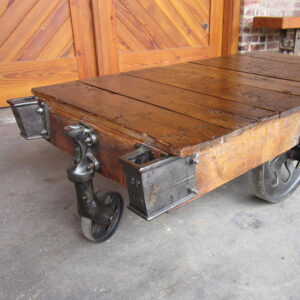 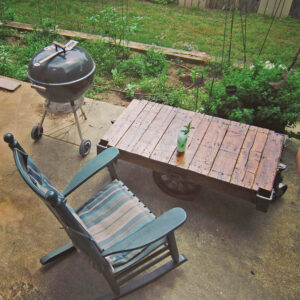 With people adhering to COVID-19 social distancing protocols, outdoor fire pits have been in demand. Hale has some. He gets former propane truck tanks and cuts them into round rings, six feet in diameter, that get wedged into the ground as fire pits.

His specialty is converting 165-ton, wooden, antique factory carts on iron wheels into coffee tables. He once bought 100 for $2 apiece. Restoration Hardware sold similar cart-tables for $1,500 apiece at one time. Hale’s prices vary. Each table can be one of a kind because of varying cast iron and steel hardware and other features. He has a stock of Lineberry, Nutting, Thomas, Globe, Hamilton, Charles Francis, and Towsley carts.

Over time, he’s bought at least 3,000 to 4,000 carts. He sells parts, too, so do-it-yourselfers can make their own. Designers and people who develop exhibits often want them. The Walt Disney Company bought some for a Harry Potter exhibit at their Florida Magic Kingdom. Hale shipped a refurbished cart to Hong Kong for a Calvin Klein store. A California designer bought some for the Bonnaroo music festival.

A Volkswagen Hale cut in half. Art. By Glenda Booth

Hale also has a construction business and does tiling, stone work, and landscaping, usually repurposing materials into modern construction and renovation. An 1870 Arrington Railroad Station, scheduled for demolition, is now part of Devil’s Backbone Brewing Company in Nellysford, thanks to Hale. Hale bought it, disassembled it and put it back together with historic architectural and structural accuracy. Then he took it apart a second time and put it back together in one day at the brewery. The station is now the Bluegrass Grill and Bakery.

His Nelson Storage business has water-tight, steel storage containers for lease or sale and 2,000-square-foot, private rooms with high ceilings, where customers can store more mishmash, like antique cars. He also sells and leases dumpsters and boasts that he can deliver a two-ton, roll-off dumpster with ease.

Jamie Hale, Jeremy’s wife, manages another “collection” in the warehouse building. She runs Buteo Books, which specializes in new and used ornithology and natural history books and field guides, some rare and out of print. They offer more than 2,000 titles, from the birds of Ecuador to why birds migrate. “Buteo Books is the place to locate that hard-to-find title,” says the website. 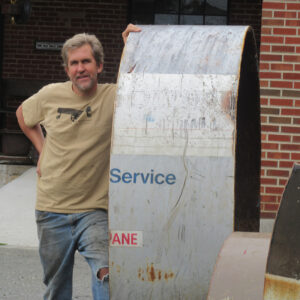 Hale and a ring he cut from a truck fuel tank, to become a fire pit. By Glenda Booth

Hale bought the Arrington warehouse in 2006. Imposing to many, for him it has a special history and charm. It was built in 1930 next to the railroad tracks as cold storage for the local apple growers co-op. At that time, it could hold 180,000 bushels awaiting shipment by rail and move apples up and down on two, still-functioning freight elevators. In another building next door, built in 1918, a Model T automobile company took disassembled parts off railroad cars and assembled them. It’s now a home for more of the Hale collection.

The public can see the Arrington railroad depot at the Devil’s Backbone Brewery. Hale’s LOVE sculpture is on permanent display at the LOCKN’ music festival grounds on Infinity Downs Farm in Nelson. Pro Re Nata Brewery in Crozet and Bold Rock Cidery in Nellysford have Hale’s firepits, lighting fixtures, and lots of décor. He made the bar for Richmond’s Answer Brewpub in Richmond.

Collecting is a passion, a profession and a cause. We are “five businesses and one tired couple,” says Hale.