Increasingly unique opportunities for entertainment seem to be trending, from movie theatre experiences that are elevated with dining and imbibing options to various tours and themed events at local wineries and breweries. However, one of the most intriguing trends lies in the popularity of the escape room which employs the concepts of collaboration, fun, and mystery, often with a dose of history. 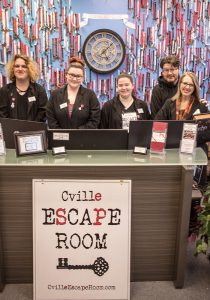 Cville Escape Room was opened by Jessie and Keith Stowell who have harbored a long-term love for game-playing. Long before the rise of the concept’s popularity, the couple created miniature escape room style activities for their children’s birthdays. Upon realizing the potential for success as a business, the two ventured into opening the location nestled on the Downtown Mall.

“Once we were fortunate enough to find one and play it, we just knew we needed to bring this amazing entertainment to Charlottesville,” said Jessie.

With six different rooms, each with their own ambience, Cville Escape Room provides players with a feeling that they have stepped into a different time or place when they enter the room.

“In Archaeologist’s Adventure, you are digging up clues to find a lost civilization. The Dark Circus holds mysteries veiled by reality. In Conspiracy X, you are researching current conspiracy theories to find proof that one is true,” Jessie explains.

Other rooms include Paris, in which le Chat et la Souris encourages players to chase an international thief through a Paris apartment, as well as Sherlock: Moriarty’s Revenge and Jack the Ripper’s London which the Stowells describe as very rich and classic stories.

All of the adventures at Cville Escape Room are created in tandem by Jessie and Keith and they pride themselves on the extensive research they invest into every room to provide authenticity in the experience. 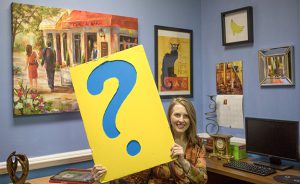 Owner Jessie Stowell sitting in the chair in the “Paris: The Cat and the Mouse” room holding a “clue sign” which participants can flash when they need some extra help.

“We are a husband and wife team. All of our rooms are unique from rooms you will see anywhere else. We are constantly on the lookout for interesting props, decor, and artifacts that will enhance the new rooms we are creating. Sometimes we find the most interesting things in the oddest places; sometimes we go out searching for specific unique items,” Jessie shares.

Keith has degrees in both history and theater. His knowledge and experience in both help the couple build experiences that feel genuine to escape room participants.

“His experience and research bring together the two most important elements of recreating a truly authentic experience. One of the greatest compliments we received was from a group of real life archaeologists who played our Archaeologist’s Adventure. They were astounded and highly complimentary about the accuracy of the artifacts and time period involved,” Jessie says. 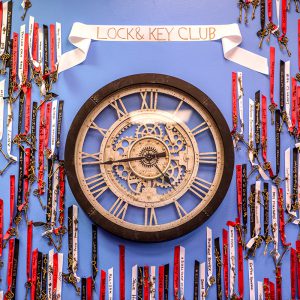 Choosing those themes, like Archaeologist’s Adventure, is a collaborative process. The two brainstorm together to select themes that they are both excited to design and the process is highly-detailed and lengthy. Often taking six to twelve months to complete the rooms, they dedicate the time with the goal of creating an experience that has a general audience appeal, from corporate groups to college students and everyone in between.

“Playing a Room at Cville Escape Room is like stepping through a door into another world,” Jessie says. “Each room tells a story, and you become part of that story. Hints can be anywhere in the room, and anything in the room can be a hint. All decor and puzzle elements enhance the theme of the room. For example, in Paris: le Chat et la Souris, all artwork is French, music of a popular pop Parisian singer plays, and we consulted with a native French speaker on all translations.”

To speak to the beauty of the room, and its appeal, the Stowells say they have been honored to have three proposals in that room alone, in addition to another almost half dozen proposals in the three and a half years since opening.

A common concern for potential participants is the feeling of being trapped. The Stowells alleviate this fear on multiple levels.

“We never lock the doors,” exclaims Jessie. “Players are allowed to leave the room at any time, and to return. We take great care with guests who are concerned about feeling claustrophobic, giving them a sneak preview of the room, and demonstrating that they can open the door at any time. Once they start playing, their minds are so engaged in the many varieties of puzzles, being in a closed room is no longer a concern. We have never had a guest leave the room because of feeling claustrophobic.”

Additionally, while photos or videos are not allowed in the rooms – players place their phones in an unlocked briefcase that they then carry with them into the room – the Stowells are happy to make exceptions.

“Parents with babysitters, doctors on call, or any other situation where a player needs to keep their phone with them – in those cases, we ask them to step out of the room if they need to use their phone,” explains Jessie. 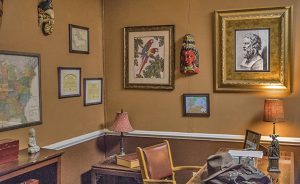 A peek inside one of the game rooms

As for those who want to bring children along, Cville Escape Room is family friendly in all of its rooms and they work closely with children to ensure everyone is making progress and enjoying the experience.

“Even The Dark Circus and Jack the Ripper’s London are not scary for young players. We welcome all ages. Many escape rooms don’t allow players under a certain age. We welcome everyone,” says Jessie.

Unlike some escape rooms, Cville Escape Room boasts a 100% success rate on solving the game. While many escape rooms have a limitation to the number of hints given and the time allotment, the Stowell’s philosophy is that it is more fun when players have the opportunity to win. Unlimited hints are provided, and often a few extra minutes are available to help players to be successful.

Bookings are public so guests who do not purchase all tickets for a particular time and room will likely be joined by other guests to help solve the room.

“Players walk into the room introducing themselves, and high-fiving on the way out,” Jessie says.

Plenty of options for hints are available, and the Stowells are always available for help, but escape room participants who may be highly competitive or set on solving the room without assistance might fare well to be selective about their team member choices. Several of the Piedmont Virginian editorial team members who visited on various occasions extended the wise advice to choose team members with diverse backgrounds, age, and knowledge if the intention is to be independently successful at solving the mystery.

While it’s a popular spot during its regular weekend hours for birthdays, and has been host to at least eight wedding proposals, Cville Escape Room is also open for special events during the week for a minimum of eight players and tailors each event to the individual group.