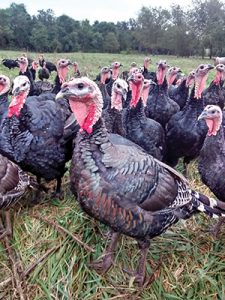 “Kelly” comes from the British farmer Derek Kelly, who started raising and marketing these birds in 1984 in Essex, England. “Bronze” comes from their glossy brown color. While Cari was working on a post-doctorate in cancer research in Dundee, Scotland, and Judd had a sales job with a poultry nutrition company, Judd called on Paul Kelly, Derek’s son, and Kelly Bronze turkeys began their journey across the pond. The Culvers fell in love with the Kelly Bronze mystique, bought a farm at the foot of Calf Mountain, renovated an 1870s farmhouse, and became turkey farmers. Their two sons, Afton, age six, and Lachlan, age four, love the birds, says Judd.

“When you eat a Kelly Bronze turkey, it’s the juiciest, tastiest turkey you’ve ever had in your life. This is the closest to the Pilgrims you’ll ever get.”
—Judd Culver

The Culvers tested the market in 2012, 2013, and 2014 with 125, 250, 500 birds. Once they felt assured that American customers would accept this special bird, they produced 1,000 turkeys for Thanksgiving in 2015.
Kelly Bronze is more than a turkey breed. These are free-range turkeys (Motto: “Bred to be wild.”) that roam the fields and woods and are raised without antibiotics, feed additives, or growth hormones. They eat mosquitoes, ticks, flies, and grasshoppers as they roam around 17 acres of pastures and woods. They also get a corn and soy diet, fresh artisan well water, and tree shade. Turkeys need food, water, and fresh air, emphasizes Judd.
These turkeys are bred for taste. Commercially raised “supermarket birds” are typically slaughtered when they are 12 to 14 weeks old, at whatever weight the buyer wants, despite the turkey’s age or maturity. The Culvers raise the Kelly Bronzes to sexual maturity at 21 to 24 weeks old.

To Buy Kelly Bronze Turkeys
Visit the artisan retailers page at www.kellybronzeturkeys.com.
To buy directly from the Culvers, email judd@kellyturkeys.com.
Tip: Order early. They ship turkeys or customers can pick them up in Crozet on November 19 and December 17, 2016.