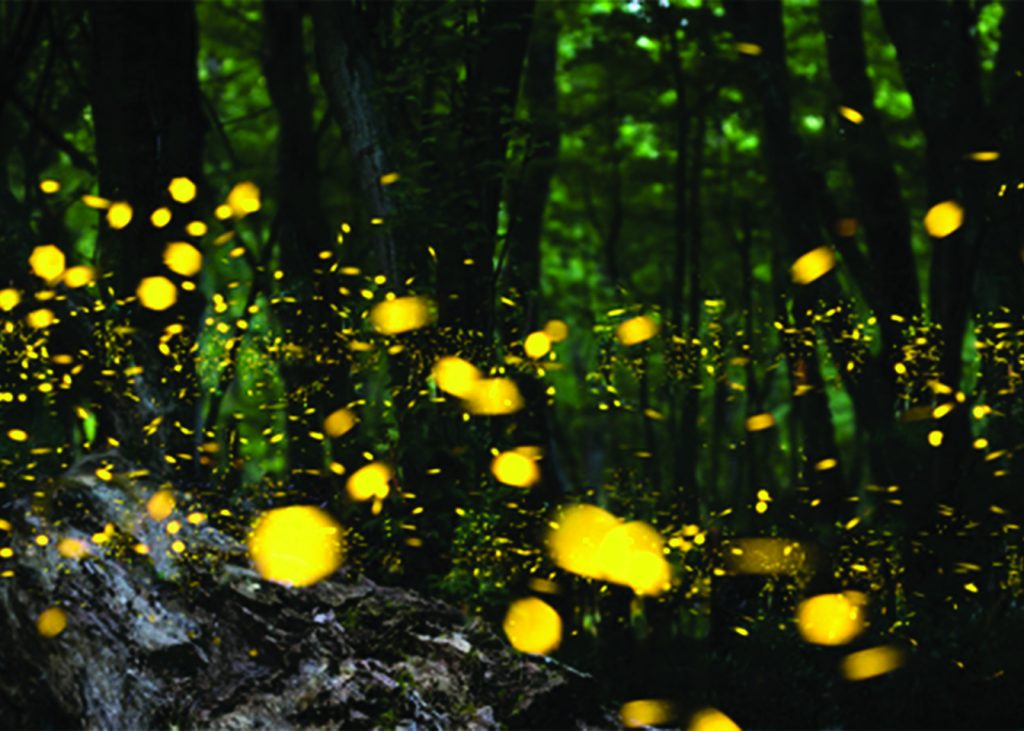 Fireflies are cute and elegant by day, but downright dazzling at dusk (courtesy of flickr.com/wplynn)

In mid-June, the night sky is electrified with millions of twinkling fireflies flashing their bioluminescent signals across the black firmament at the State Arboretum of Virginia and Blandy Experimental Farm in Boyce.  “It’s a great lightshow. The effect can be quite stunning,” comments Ariel Firebaugh, who is writing her Ph.D. dissertation on two firefly species.  She often counts more than 100 firefly flashes per minute in a 20-by-20-meter area at Blandy, a plot about the size of a small backyard. 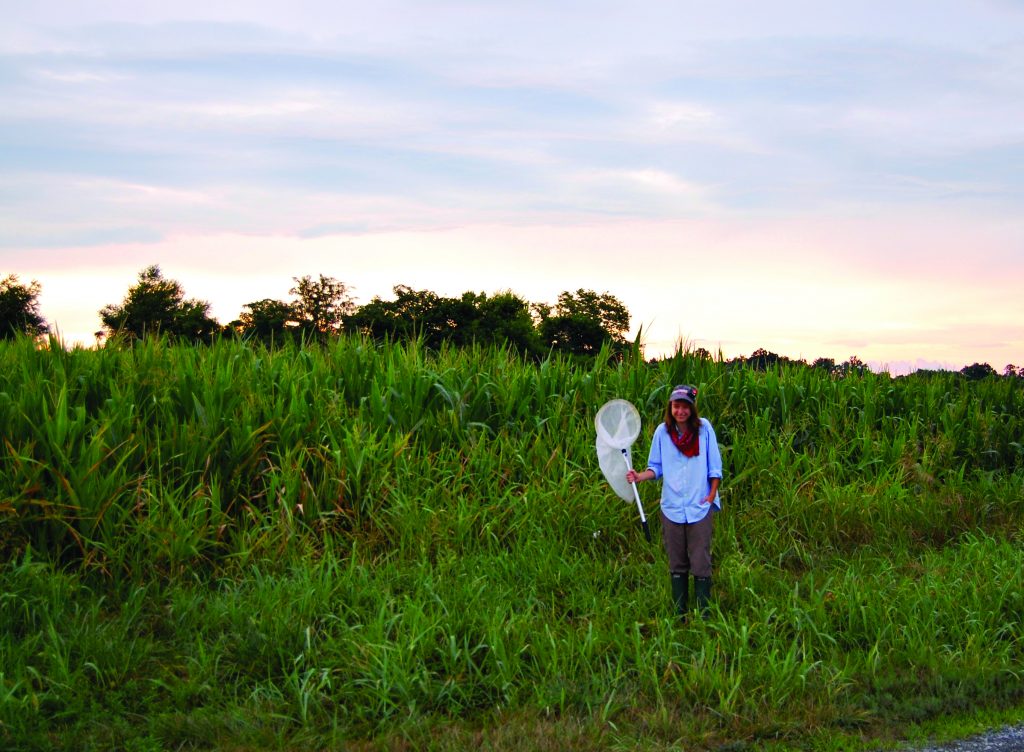 “This is firefly heaven. I’ve never seen anything like it,” adds Dr. Kyle J. Haynes, an insect population ecologist based there.  The millions of fireflies frenetically blinking are engaging in courtship, flashing their abdominal, light-emitting organs in search of the “firefly of their dreams.”  According to the Boston Museum of Science’s website, “Male fireflies flash while patrolling an area. If a female is impressed, she answers him by flashing from a perch, either on the ground or at some spot above ground, like a shrub.”  Firebaugh and Haynes are studying the Photinus pyralis and Photuris versicolor species, specifically the effects of nighttime light pollution on these fireflies’ abundance and mating success. 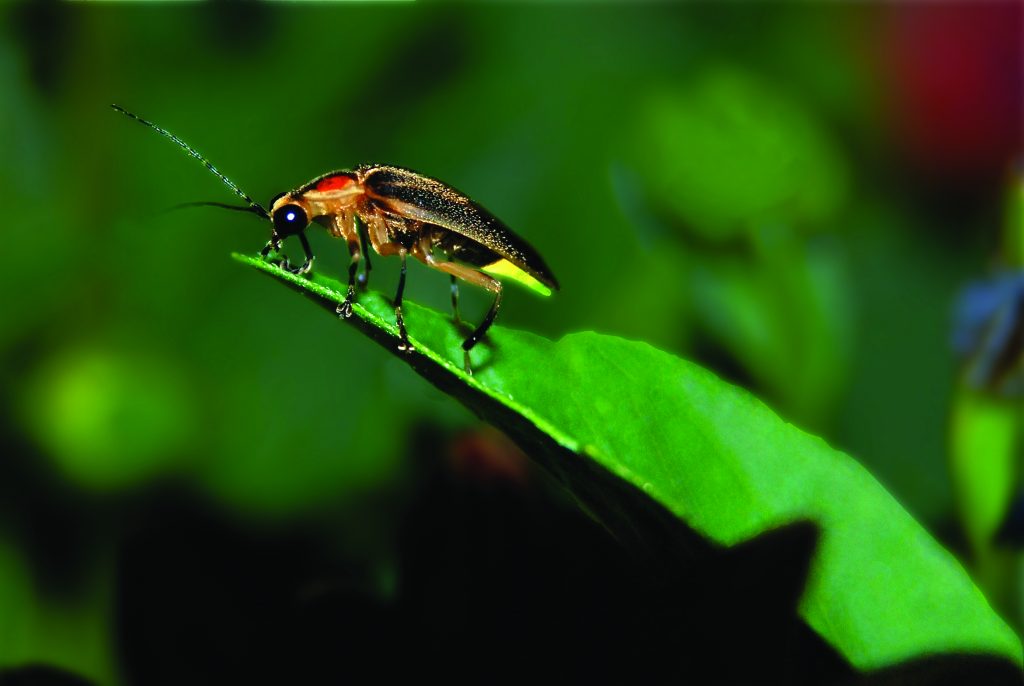 Firefly research is just one example of what’s going on at Blandy Farm and the state’s 172-acre arboretum.  An arboretum is, in short, an outdoor museum of trees, a botanical collection where experts grow different tree species for research, education, and other purposes.  Virginia’s arboretum got its start in 1926 when Graham F. Blandy, a New York stockbroker and railroad tycoon, bequeathed 712 acres of his 900-acre estate to the University of Virginia for research.  The university hired biologist-geneticist Orland E. White, the farm’s director from 1927 to 1955. A man curious about which plants and trees could grow where, he started planting trees at the fledgling arboretum.  White’s arboriculture has grown to more than 8,000 specimens today.  In 1986, the Virginia legislature designated the complex the State Arboretum of Virginia Blandy Experimental Farm. 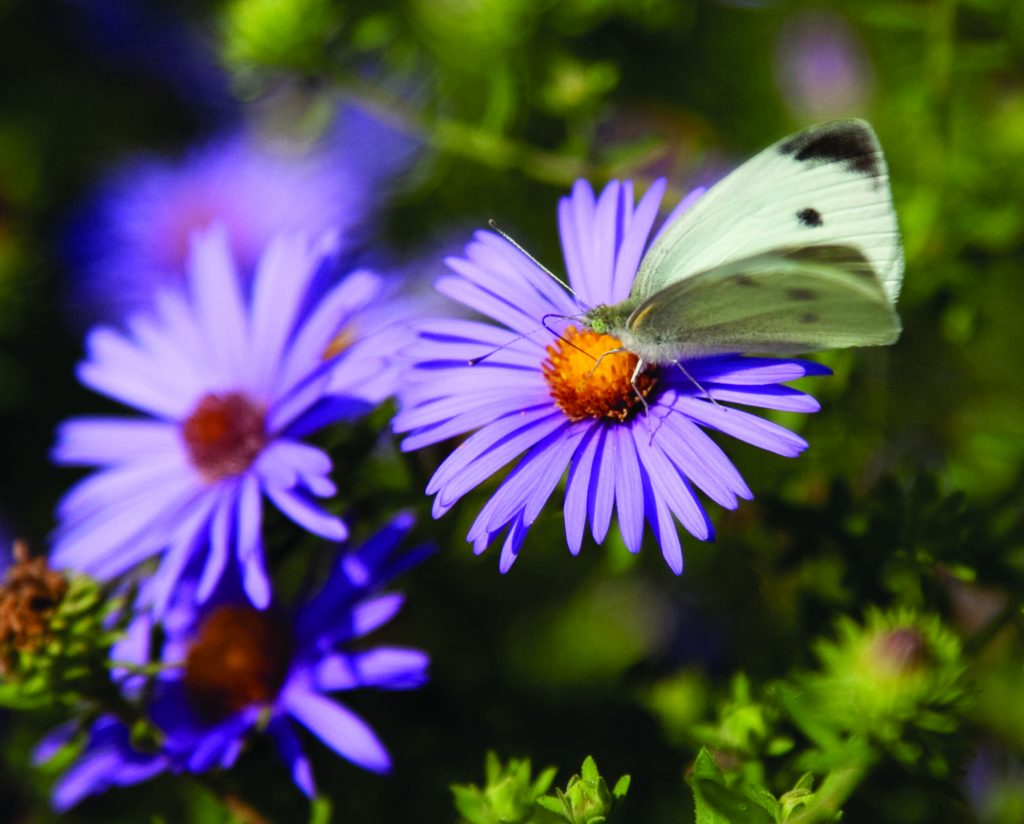 Butterflies, such as the cabbage white butterfly on this aster, are important pollinators at the arboretum.

Here the land gently undulates as vultures soar and hawks glide on thermals above the rocky karst geology of the northern Piedmont and Shenandoah Valley.  At the arboretum, trees are nature’s “centerpiece,” but the arboretum and farm are much more than trees.  It’s all about biodiversity, ecology, science, education, and exploring nature’s mysteries and resilience.

Officials have mapped 5,491 individual trees.  This includes 546 species of trees and shrubs and 872 cultivars and varieties.

The arboretum is home to 1,300 conifer specimens; one-third of the world’s pine species; 300 ginkgo trees (Gingko biloba), one of the largest collections of ginkgos outside the tree’s native China; the largest variety of boxwood cultivars in North America, 162 types; and a 36-tree cedar of Lebanon allee.  A one-half-mile old farm road, today called Dogwood Lane, is lined with 200 dogwoods, many of which are Cornus florida, Virginia’s state tree and flower.

There are 15 state champion trees identified by the Virginia Big Tree project, like the Arizona cypress, a Himalayan white pine, a hardy rubber tree, and a Miyabe maple.  The earliest known tree planted dates to 1927, a Norway maple planted by White himself.  This collection of trees is the only mature arboretum on limestone soils on the East Coast. 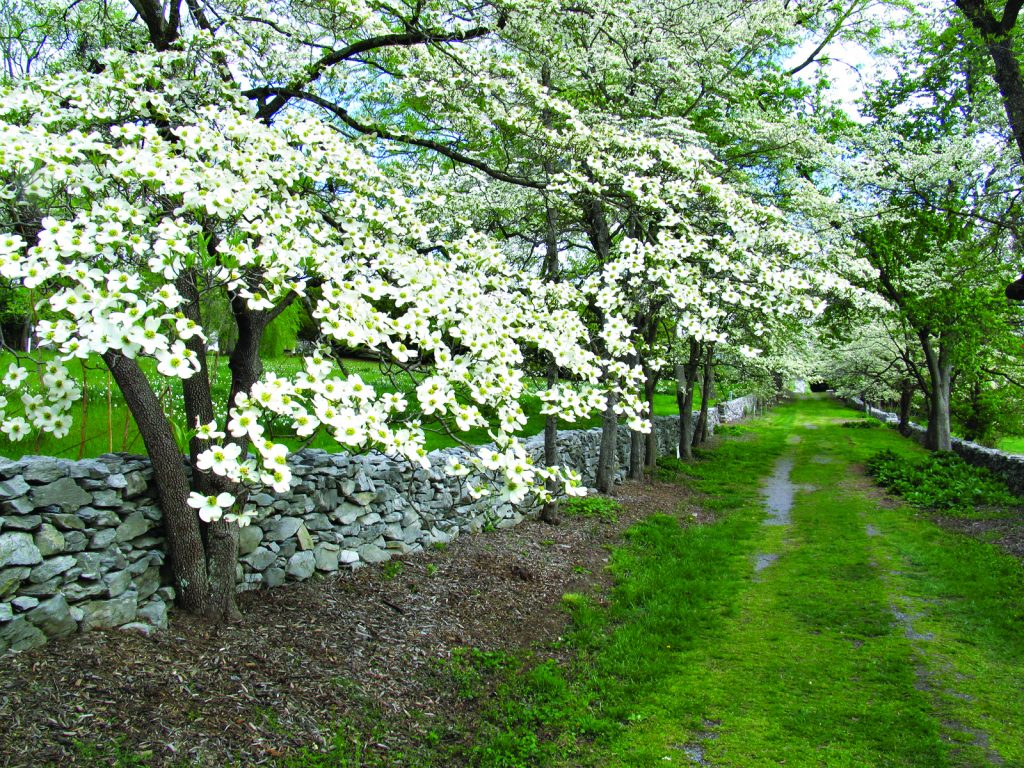 “Trees have been referred to as the furniture of the landscape and for their survival all members of society must take their share of responsibility.”   From Trees of the World by Bayard Hora

But there’s more to Blandy than its trees.  There’s a native plant trail, herb garden, perennials, and a wetland pond fed by Rattlesnake Spring that is home to wood frogs, spring peepers, American toads, dragonflies, and occasionally spotted salamanders in the spring.  The 34-acre meadow of native grasses and wildflowers attracts northern bobwhites, quail, and rabbits.  The American Boxwood Society’s Memorial Garden, with almost 60 boxwood specimens, is surrounded by towering white cedars, junipers, and arborvitae.

People have recorded at least 220 bird species.  Shenandoah Audubon monitors 100 bluebird boxes.  Birdwatchers have raved about a long-eared owl in recent years, which “among the most hard-to-see birds in North America,” according to David Carr, Blandy’s director.  Virginia has averaged one report per year of this elusive bird named for its long, upright ear tufts that resemble horns. 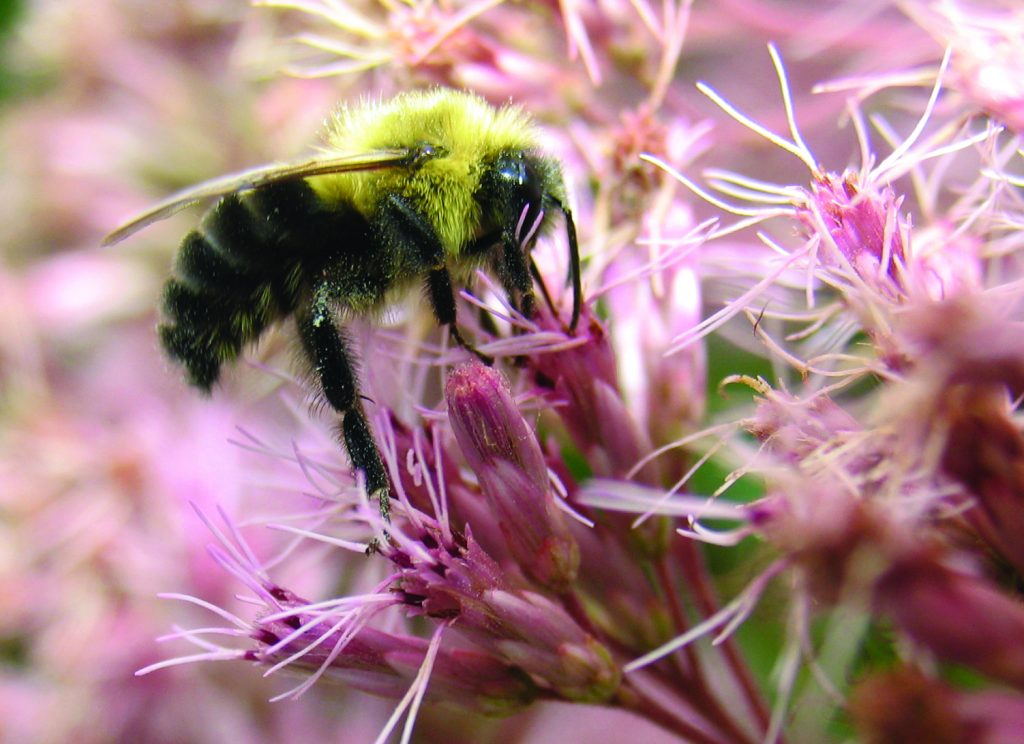 The pollinator garden, largely consisting of native plants, is organized by pollinator instead of seasonal plants, so there’s a garden for plants pollinated by flies, moths, hummingbirds, butterflies, and the wind.  Scientists have identified 154 bee species, and the Smithsonian Institution’s D. R. Smith has found upwards of 200 species of sawflies.

The farm and arboretum are outdoor classrooms for students of all ages. Around 7,800 pre-K to twelfth grade students visit each year along with 300 to 600 teachers.  Budding scientists can explore topics like seed germination, plant growth, bird adaptations, insect life cycles, and soil science. 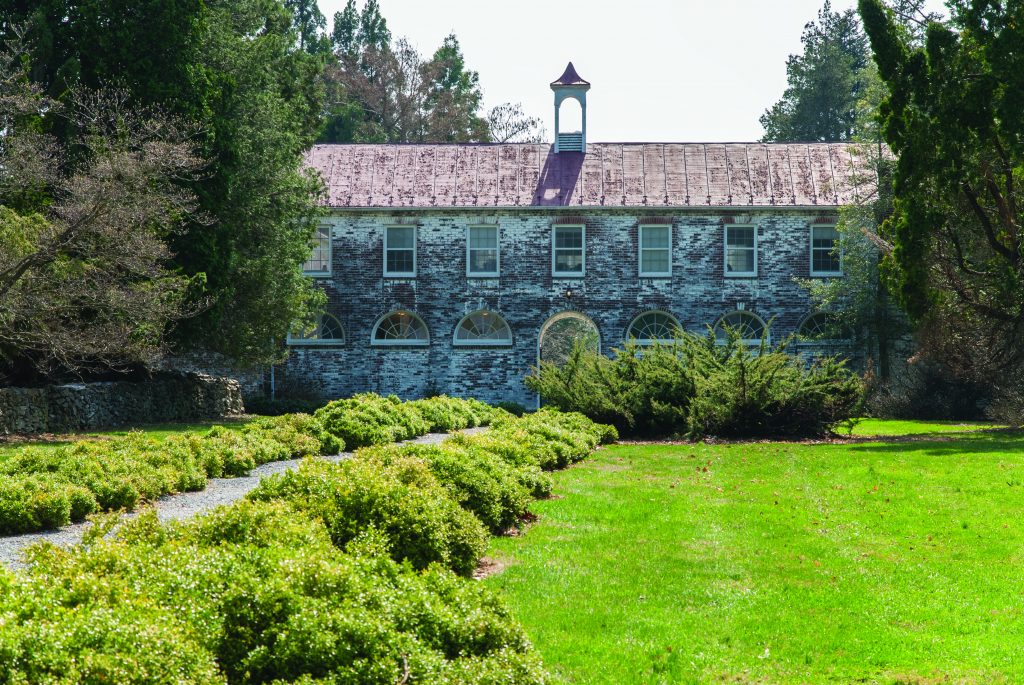 The oldest part of the Quarters dates to the early 1800s; the center and west wings were added in the 1940s. (Photo by Jacki Dyrholm)

The entire Blandy Experimental Farm is an official historic district listed on the National and Virginia Registers of Historic Places.  Though buildings such as “the Quarters”—a 10-room, white-washed brick building built between 1825 and 1830 that possibly served as a slave quarters—have been refitted to accommodate offices and student housing, the district retains its authentic historical appearance. 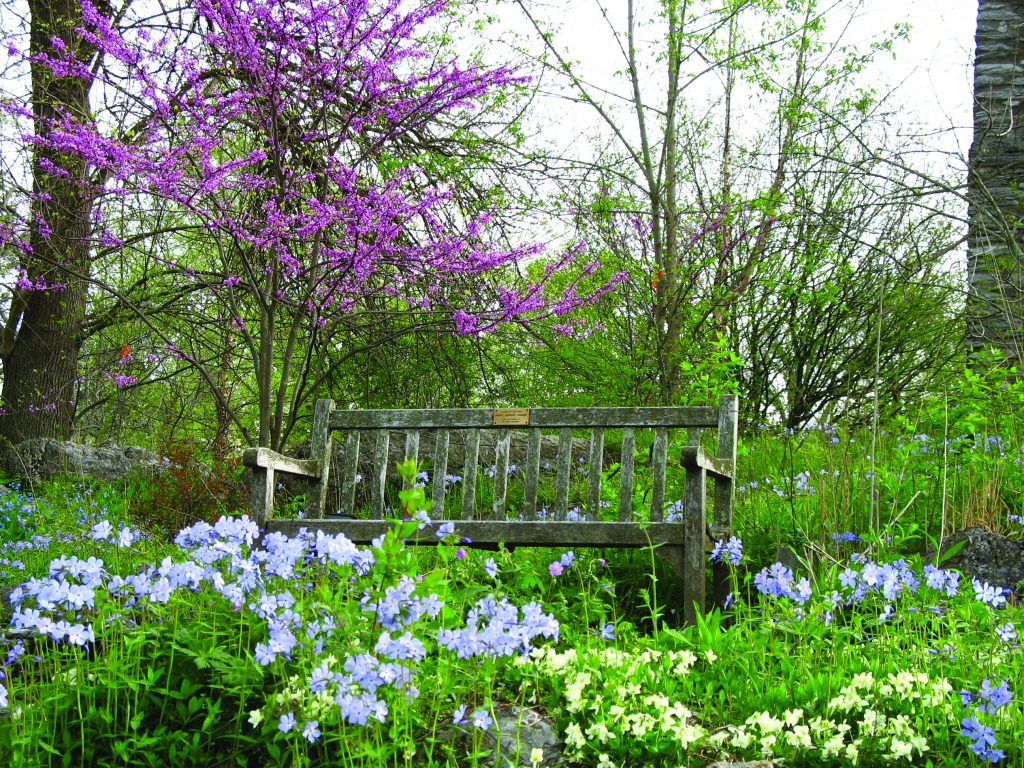 University of Virginia students have been conducting research on the farm since the late 1920s.   The National Science Foundation supports an 11-week, summer undergraduate program in which students research ecology and environmental sciences.

Today, scientists and students are probing topics like predators of eastern painted turtle nests;  gypsy moth outbreaks; plants’ chemical defense systems; the effects of human-caused light pollution on plant growth and the nutritional quality of plants eaten by herbivores; pharmaceuticals’ impact on insects; and the consequences of pesticides in colonies of alfalfa leafcutter bees.

T’ai Roulston, a curator, studies plant-pollinator interactions.  One intriguing project examines a parasitic conopid fly that lays eggs on a bee’s larvae.  The fly then grows inside the bee and forces the bee to burrow into the ground, literally digging its own grave.  An adult fly then emerges from its bee host and goes on to implant more bees with eggs.  Roulston seeks to understand the importance of parasitism to bees’ abundance, what controls the population of bumblebees, and how to conserve native bees. 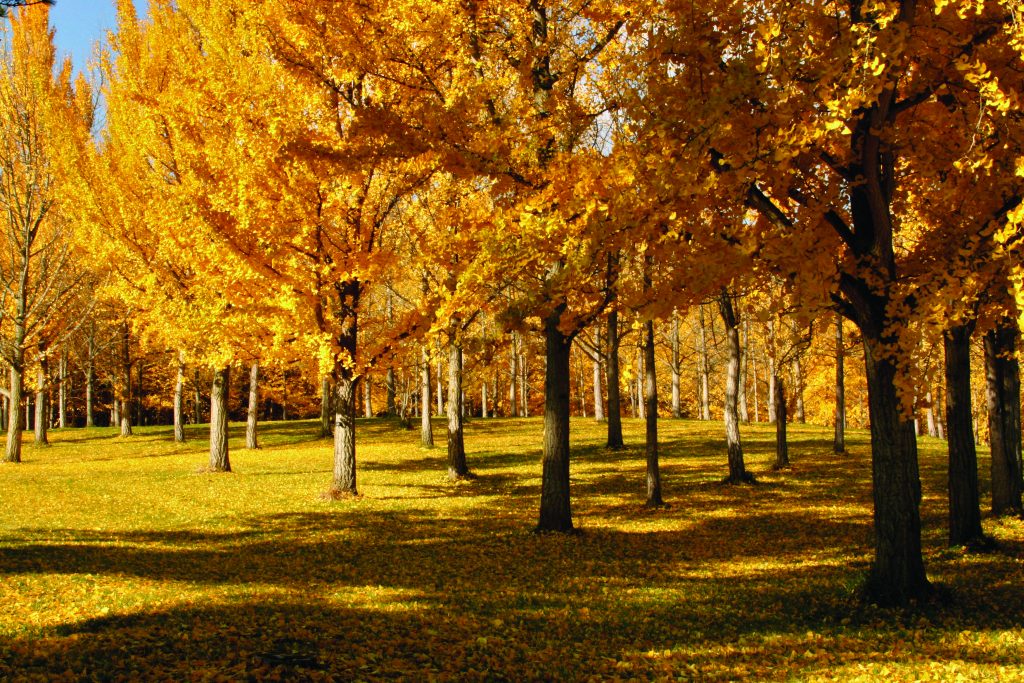 A grove of more than 300 ginkgo trees (Ginkgo biloba) burst into a blaze of color each fall at Blandy Experimental Farm near Boyce, VA.

In two test plots at Blandy, the American Chestnut Foundation is crossbreeding American chestnut trees with Chinese chestnut trees, which are naturally resistant to the blight, in hopes of ultimately having genes that provide resistance to chestnut blight fungus.  Before 1904, the American chestnut, with trunks up to 10 feet in diameter, was the predominant tree species in eastern U.S. forests, but a devastating fungus made the tree effectively extinct from Maine to Georgia.

At Blandy, visitors, students, and scientists are exploring many of nature’s mysteries, including those amorous little fireflies that twinkle feverishly in the summer night sky. 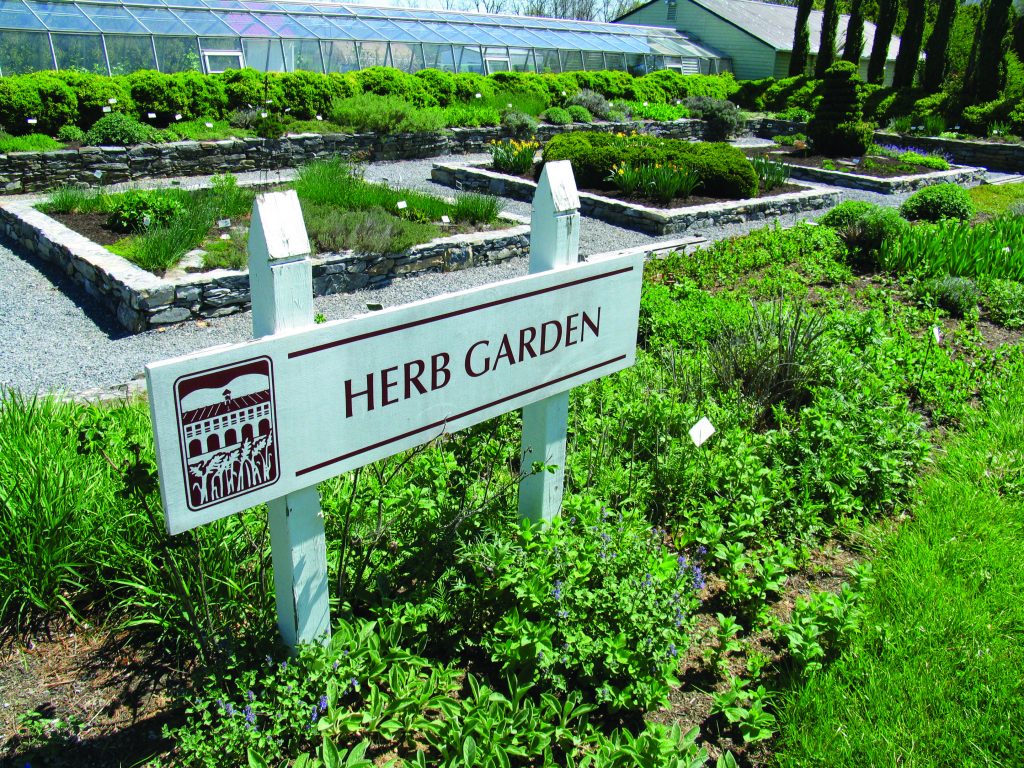 The arboretum is open 365 days a year, dawn to dusk, at no charge.  For youngsters, there are outdoor educational programs, nature camps, tree planting sessions, and more.  For adults, Blandy offers  a 2.6-mile driving tour, four walking trails, a Science Café, a Mothers’ Day garden fair, a sketch group, book club, photo club, tree care workshop, and many lectures on topics like vernal pools and macro photography.  On the popular full-moon walks, people listen for screech owls, barred owls, foxes, and tree frogs.  And many visitors just savor the soothing silence of the day or the night.  Visit their website by clicking here. 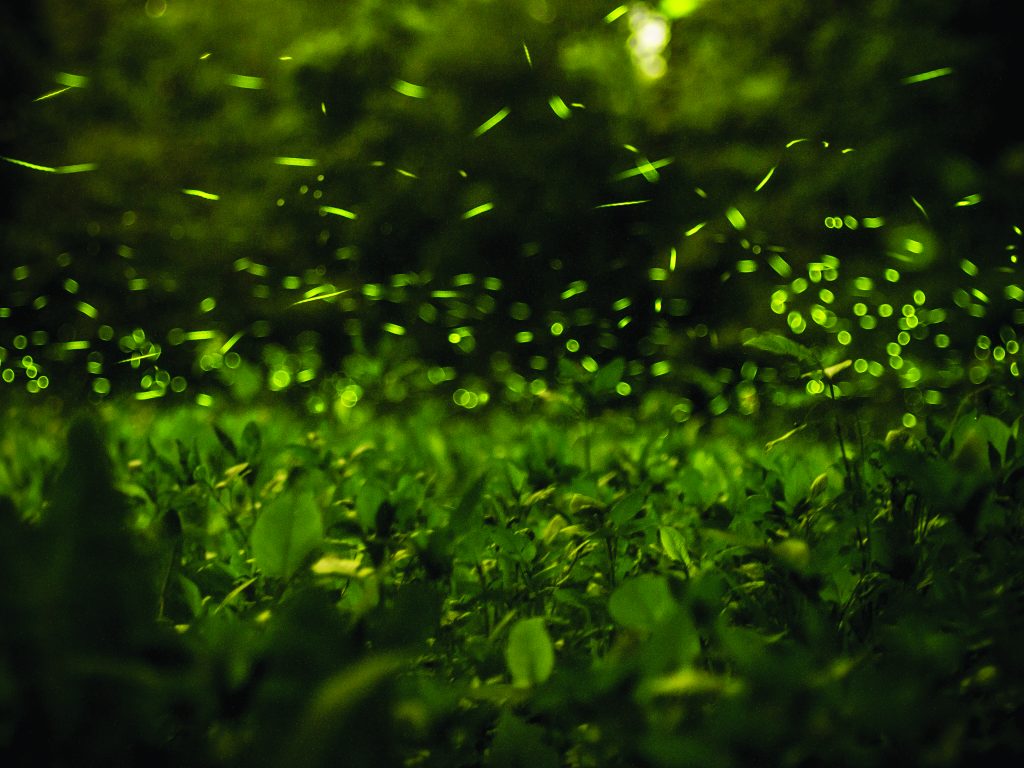