Nothing is ever “set in stone,” not even stones, writes Walter Nicklin 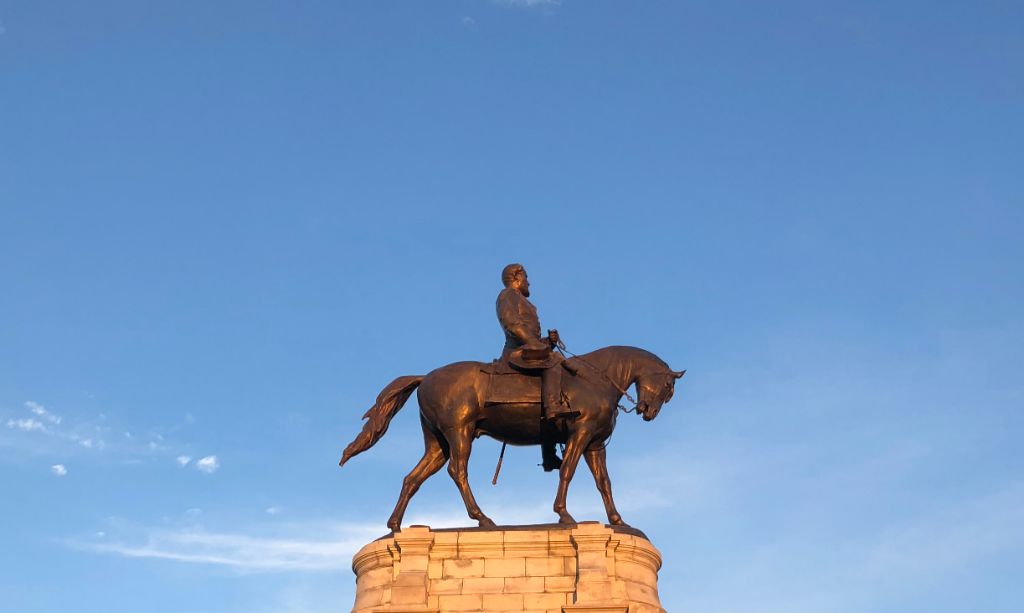 Nothing is ever “set in stone,” not even stones. As the Confederate monuments come down, the stories we tell ourselves, more malleable than stone, become subject to annotation and amendment, even revision. We need stories, whether they are true or not. From stories, meaning is imparted to otherwise chaotic experience.  Stories try to make sense about what happened, what almost happened, and what should have happened.

To grow up in segregationist, rural Virginia, as I did, was to find deep resonance in the stories of William Faulkner. Here from the novel “Intruder in the Dust,” he eloquently evokes the start of Pickett’s Charge at the Battle of Gettysburg, frequently called the Confederacy’s high-water mark:

For every Southern boy 14 years old, not once but whenever he wants it, there is the instant when it’s still not yet two o’clock on that July afternoon in 1863, the brigades are in position behind the rail fence, the guns are laid and ready in the woods and the furled flags are already loosened to break out and Pickett himself with his long oiled ringlets and his hat in one hand probably and his sword in the other looking up the hill waiting for Longstreet to give the word and it’s all in the balance, it hasn’t happened yet, it hasn’t even begun yet, it not only hasn’t begun yet but there is still time for it not to begin . . . .

What makes history so interesting — the basis of most of the stories we tell ourselves — is that what happened in the past didn’t have to happen. Nothing was yet inevitable. Events become inevitable only in retrospect.  So history’s contingencies — the imaginative “what-if’s” — fascinate and make poignant notions such as “The Lost Cause.” Even discounting the legitimacy of that particular “cause” (the Confederacy), it was for me simply a powerful metaphor for the tragic understanding of what makes us all human — when what we will to happen does not happen.

To fight, to be defeated and honorably die for reasons quickly forgotten in the heat of battle — as during Pickett’s Charge — is a story told around fires by the earliest humans. With Homer, it becomes the urtext for Western civilization’s narrative traditions. Achilles, Ajax, Hector, and Odysseus are memorialized for their heroic actions — not for any cause for which they were presumably fighting: who gets to call Helen his wife?

But stories that can unite us — helping to forge a community, a nation, a world of peace — can also divide us, as facts are forged to fit into narrative storylines. Indeed, competing narratives can become dangerous and deadly.  For a much more recent example than the American Civil War: Germans’ story of how World War I ended — that their soldiers had been “stabbed in the back” by their own government — was decidedly different from the story Americans, British, and French told themselves. World War II was the inexorable consequence.

So, too, the Confederate monuments. Increasingly, the stories associated with them have less to do with valor and courage fighting against inevitable defeat than with the institution of slavery. The same with the Confederate battle flag: no longer a proud proclamation of rebellious independence but an inflammatory symbol of white supremacy. Not a rebel flag but a racist flag.

My Faulkner-loving, younger self is sad that the monuments are coming down. My older, presumably wiser self must reluctantly admit that to leave them in place is to invite something like another Civil War.

What endures — more lasting than the stone of monuments — is the Civil War’s blood-soaked landscape, such as here along the banks of Rappahannock River where Lee’s Army of Northern Virginia and Lincoln’s Army of the Potomac clashed. The stories told of this history are integral to the Virginia Piedmont’s genus loci (“spirit of the place”). Monuments are not needed when the landscape — with its ghosts of Confederate and Union dead — speaks so eloquently.

Share on FacebookShare on Twitter
« Fiery Run, Virginia
Sneak Peek into the Fall 2020 issue of the Piedmont Virginian »