How Gabrielle Rausse and Gianni Zonin kick-started a viticultural revolution. 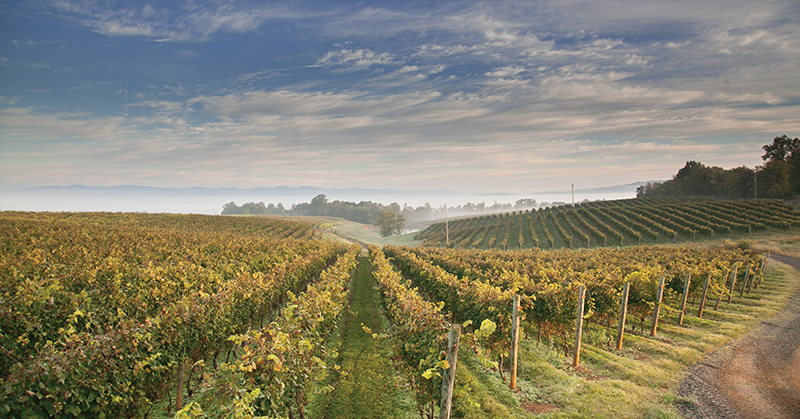 It turns out that a bit over 40 years ago, fresh off an abortive stint working in Australia’s wine country, a 30-year-old Gabrielle Rausse—a man The New York Times would, in the early 90s, crown the “Father of Virginia Wine”—made a decision that would not only radically alter the course of his own life, but also the history of the Piedmont and the state of Virginia.

“My Australian visa had been revoked on a technicality and I’d been forced to go home to Italy,” Rausse says, laughing as he recollects the impetus that brought him to the commonwealth. “I wanted to be in Australia, but that wasn’t happening. So, as I was down on what to do, when Gianni [Zonin] offered me the opportunity to come to Virginia and help him try to make wine, I said to myself, ‘What better do I have to do?’ ”

On the one hand, as the two men’s fathers had grown up together (in Veneto, a region in northeast Italy lauded for its wine production) and, due to Zonin’s status as a family friend, Rausse felt confident in the promise of work in America—that is, that Zonin wouldn’t go bust and leave him homeless and stranded. But on the other hand, pondering the venture’s seemingly unfathomable lack of practicality, Rausse was convinced his soon-to-be-employer was completely insane: The year was 1976—while California had become something of a consolation-worthy vintner’s mecca, no one had taken the notion of making quality wine in Virginia seriously since Thomas Jefferson began persistently failing at it almost 200 years before… And yet, fascinated by Zonin’s confidence, charisma, and zany determination, Rausse accepted his offer, albeit somewhat ambivalently. 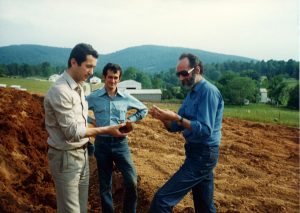 “When I agreed to help Gianni, I did it with a big caveat,” says Rausse. “I told him, ‘I’ll help you until I can get my visa for Australia, then I’m gone.’ While what we were doing was this big adventure, at the same time I didn’t really think we’d succeed. So, in some regards, I was just passing time.”

In fact, says Rausse, initially the project’s major draw more or less distilled to the opportunity to work on his English in a native setting. However, post arriving in Charlottesville and encountering the disdainful stigma Zonin’s idea was met with, Rausse became increasingly enamored with the idea of accomplishing something the who’s who of the wine world dismissed as impossible.

“Everyone who knew anything about wine-making was laughing at us,” says Rausse. “People thought we were crazy. And because of that, there was no pressure for us to succeed. Without the pressure of having to succeed, we were free to experiment and see what we could make happen.”

Faced with the establishment’s overwhelming surety of Barboursville’s imminent and inevitable failure, in 1976, at its earliest inception, the operation got its start as a multifaceted farming venture. The notion was, if Zonin’s recently purchased plantation could be made to pay for itself by other means, what might perhaps prove to be a doomed foray into winemaking would, in effect, be rendered less of a losing effort. As such, there were cattle, horses, a produce garden, and, but of course, the vines.

“Gianni’s idea was that, while we might not be able to make great wine—” after all, Jefferson himself had labored for decades without producing a single truly successful batch—“we could try and go into business making grafts,” says Rausse.

Ultimately—and, in a sense, unintentionally—it was this approach that paved the way for Barboursville’s success and, arguably, that of the Virginia wine industry et al.

What happened was, on a reconnaissance mission to California’s Napa Valley in early 1977, Zonin and Rausse were offered a first-hand glimpse into the industry’s grafting process. The two had made the trip because very few of their inaugural plantings made it through the winter (over 60 percent died, with the majority of the rest suffering severe damage). This was, they determined, the result of weak grafts.

“In California, the climate is very mild, very perfect,” says Rausse, “so you don’t need a strong graft. However, for our application, the graft had to be perfect. And that’s not what they were doing. The process was very primitive. It produced weak vines that couldn’t withstand the Virginia winters.”

As a result of this cross-county expedition, Rausse and Zonin returned to Barboursville buoyant and hopeful that, if the grafting process could be perfected, they could unlock the secret of producing world-class wine in Virginia.

In short, Rausse had been converted. He was now officially a believer. 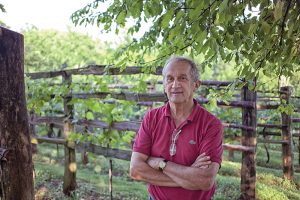 Gabrielle Rausse with vines at Monticello’s Jefferson Vineyard. By 621 Studios

“I began comparing the average rainfalls and climate for Charlottesville with that of my home region in Italy,” says Rausse. “And while there was a big variation in the low and high temperatures, the average was exactly the same. Discovering that, and thinking about what we’d seen in California, I thought to myself, ‘My god, this can really be done!’ ”

Fueled by this epiphany, Rausse dug into the past, studying examples of grafting techniques employed by the Russians to grow wine in northern climates that, in terms of viticulture, were considered extreme. He then took these techniques and combined them with those he’d learned while growing up on vineyards in cooler, but weather-wise consistent northeast Italy. The combo, thought Rausse, would account for and protect against the sometimes finicky flux of Virginia growing conditions.

Within a single year, after much experimentation (i.e. an obsessive Jeffersonian campaign of trial and error), Zonin and Rausse achieved their goal.

“Once we got the grafting process exactly right, we sold over 100,000 vine stocks,” says Rausse. “[And in 1978], when our vines made it through the winter, I knew we’d done something very special.”

That spring, an acclaimed Italian professor of viticulture—a man who’d previously dismissed the very notion of Virginia wine as “preposterous nonsense”—paid Barboursville a visit. Upon encountering their thriving vines, visibly shaken, he proclaimed to Zonin and Rausse with earnest astonishment: “What you’re doing has never been done.”

“It was the most pleasurable thing,” chuckles Rausse, “to do something that people knew absolutely nothing about and make it work. How amazing!” 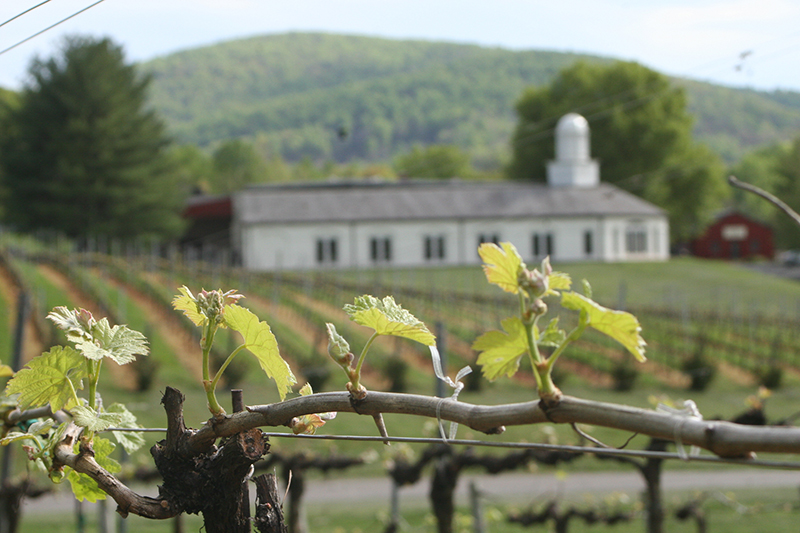 A close-up of one of Barboursville’s miraculous vines, with the tasting room in the background. By 621 Studios

Amazing enough, in fact, that Rausse forgot all about Australia.

Indeed, post helping Zonin build what would become one of the most respected vineyards in the country—Barboursville recently nabbed a top-50 slot on MSN.com’s list of top-100 US vineyards (there are presently around 7,000 nation-wide)—in 1989, with the “most challenging and therefore most enjoyable work” all finished, Rausse moved on to assist other similarly-minded viticulture entrepreneurs. Now, a hair over four decades later, the Italian native has served as the primary consultant, planner, and orchestrating agent for over 50 Virginia vineyards, as well as founded an internationally acclaimed, award-winning winery bearing his namesake. Interestingly enough, as if receiving the heavenly nod from the founding father himself, Rausse was, in 2012, named the Head Gardener and Groundskeeper for Thomas Jefferson’s Historic Monticello, spearheading the effort to bring the former president’s dream of a Monticello vineyard to life.

Share on FacebookShare on Twitter
« Recipe: Chilled Tomato Gazpacho from the Ashby Inn & Restaurant
Ghost Cat: The Mystery of the Eastern Cougar »