Flavor Forged Out of Exploration, Novelty, and Community

Inside: rough-hewn wooden ceilings, a burning pyramid of kindling, sheepskins on the wall, a metal chandelier that appears as vines and a nest; there is in Three Blacksmiths something wholly unexpected at a restaurant and still pleasantly familiar. 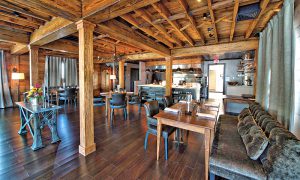 While Three Blacksmiths seems like the successor to owners John and Diane MacPherson’s previous endeavor, the Foster Harris House in Washington, Va., the concept for the new restaurant originated during a two-month adventure throughout Europe. The couple explored the continent’s diverse culinary offerings, amassing a library of 800 photos. These snapshots were arrayed into a vision board, one that united the disparate details that made each location remarkable: the cuisine, the atmosphere, the service, the interior design — all of the components, both obvious and not, of an unforgettable dining experience.

“We took what we wanted from modern, edgy restaurants, like Heston Blumenthal’s nitrogen ice cream, as well as concepts from a 400-year-old tavern in England with low ceilings, crooked doors, and creaky floors. And everything in between, too.” John says. That “in between” is where the magic of Three Blacksmiths resides. It’s a quality that says “comfort” and “homeyness” — perhaps even “intimacy.”  With fire and stone and aromatic smoke wafting from the wood-burning oven, the essence of the restaurant reveals itself. It is sheltering, nourishing, and surrounded by the friendly faces of happy diners, it urges us to unwind and be open to new experiences that challenge and delight our expectations.

Every seat in Three Blacksmiths is a seat at the coveted chef’s table. There is no mysticism or subterfuge; the kitchen is not separated. There is no distinction. There is only fluidity. You are able to watch as food is prepared and witness the spectacular focus of the chefs and the care that graces each dish.

“During our travels, one thing that struck us was that restaurants — without making a big deal about it — would use ingredients that were farmed or produced nearby and then they’d prepare them in the simplest way,” John says. “The dishes were fresh and beautiful and inspiring. So we take direction from where we live and what’s available to us: use great ingredients, don’t mess with them too much, and make them beautiful and delicious.”  Whatever neighboring farms have to offer is prominently featured. The amuse bouche epitomized this concept and perfectly set the tone: a trifecta of delicate, bite-sized treats served as a prologue for what was to come.

The theme of the dish was Whippoorwill Farm, as each component highlighted one offering from the neighboring farm. The first of the three featured a charred shishito pepper, braised and stuffed with goat cheese. Together, the dissimilar components accentuated each others’ fundamental creaminess. The next “course” was built around a fairytale eggplant paired with olive tapenade, tomato, capers, and blue cornflowers, or “bachelor buttons.” The sliver of eggplant served as a dish for the meticulously arranged, summery toppings. Finally, there was a pastry filled with mascarpone cheese balanced by the peppery spark of arugula. The dish introduced a theme for the night: the defamiliarization and deconstruction of local flavors, ones with which we’re all well-acquainted, yet somehow surprised when they are drawn into contrast by other complimentary pairings. 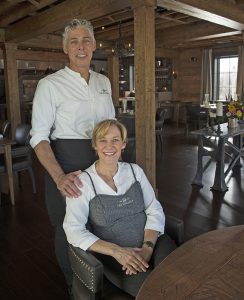 An amazing glass of wine foreshadowed the first course. The 2015 Domaine Bott Geyl Points Cardinaux Métiss from Alsace, France, combines four pinots: noir, blanc, gris, and auxerrois. The last grape is rare, the outlier among the other three, and the wine paired perfectly with the next course, a diver scallop bathed in saffron-infused coconut milk. The welcome brininess of the scallop was ignited by the notes of saffron. This was simple, this was beautiful, this was delicious: the perfect embodiment of the MacPhersons’ vision for the restaurant’s menu.

When the dishes and utensils were cleared, another dimension of the dining experience revealed itself: a discernible, shared cadence that rendered all diners in sync. Every guest was served the same dish at the same time. That is to say each diner experienced the same ebbs and flows, the sparkle of curiosity as each dish was brought out and the anticipation of the next course, as a collective unit. Given Three Blacksmiths’ prioritization of community, this is not accidental.

“Because the entire dining room is seated at the same time and we serve just one menu, there’s a rhythm to the evening,” Diane notes. “Guests may be sitting at different tables, but they’re sharing a common experience and you can feel the change in the pace as the meal progresses, just as you would at a dinner party. No one is looking at someone else’s plate thinking, ‘I wish I had ordered that instead,’ and guests aren’t bustling in for their first course as others are putting on their coats to leave.” Instead, guests can wander and mingle between courses, glance at neighboring tables and see in others’ faces the same gleeful delight they feel as they partake in a shared experience.

The next course, the “Soup ’n’ Salad,” included a cucumber soup rich with shallots and garlic, as well as the “salad” of basil, dill, parsley, and tarragon, which was accented with house-made lemon ricotta. The chill of the soup offset the restaurant’s cozy ambiance. I hadn’t before realized how much of an interrelation existed between the menu, architecture, and design. The warmth and invitation of the room is then folded back into the food as a wooden box filled with hot river stones and textured, house-made bread arrives. Everyone accepts that presentation is paramount to the success of a dish. At Three Blacksmiths, the presentation encompassed the entire experience, woven throughout the night.

In the background, Dave Brubeck’s classic jazz standard “Take Five” resonates. There’s a connection here once again, though instead of the decor and sense of place it’s the music. Jazz’s willingness to experiment, to venture away from the familiar chord or everyday time signature is reflected in Chef MacPherson’s love of tinkering with our expectations. This approach manifests itself in the next course, a variation on farfalle. Instead, we are served “palalle,” from the Italian for “shovel.” It is a soft, buttery pasta the size of a palm and cradles a bounty of mushrooms: kigali, shiitake, pio pio, their stems reduced into an earthy distillation. One detects the presence of summer truffle in the dish, its garlicky and pungent flavors nestled comfortably alongside those of the mushrooms. Together, the flavors overlap but remain distinct. 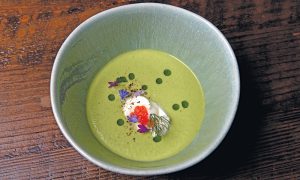 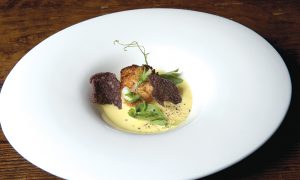 Then there is the tenderloin brushed with sorghum and finished with fire. While John tells me the menu changes a little every seating and entirely every three weeks, this dish could remain a staple, an anchor to the rotation and novelty if only the owners’ vision were not so uncompromising about using what is fresh and local. The succulent, tender meat — was accentuated with beer-braised chard, a nod to soul food and its inherent comfort.  Apple and blackberries added a tart, organic flourish. Sugar snow peas and a cluster of nasturtiums absorbed these tastes, and in doing so, gave the same flavors a different texture.

Rather than merely describe the dessert — the crunch of the crust, the sticky-sweet, smile-inducing peaches — it’s better to describe what led to the dessert. Earlier that summer day, John was purchasing groceries from a corner market when he noticed the unseasonably early and unusually small peaches. Astonished as much by the potent, saccharine punch as he was by the sheer fact that they were available, he travelled to the source: Thornton River Orchard. There he was asked to wait for the owner to gather a half-bushel of peaches, but in a hurry to begin the night’s preparations, he rushed back to the restaurant. Some time later, the orchard’s owner arrived with these succulent peaches teeming with nectar.

What is the refrain that resounds at Three Blacksmiths? Use what is fresh, what is nearby, don’t mess with it too much, make it beautiful. Such a simple strategy runs the risk of appearing easy, as well. It isn’t, but Three Blacksmiths makes it seem that way.