Autumn has fallen. And as it happens every year in our glorious Commonwealth, beautiful colors of yolk, russet, and vermilion overtake the maple, mulberry, and oak trees as the steady drop in temperature reminds us that we’re about to settle into the year’s homestretch. For me, no other month satisfies the love I have for this time of year than October, the first full month of the new equinox. I always find a new rhythm in my pace and the crisp air fills my senses with seasonal culinary and imbibing desires.

It turns out, as good luck would have it, that October is also Virginia Wine Month. And this year’s annual observance may very well be the most anticipated one yet, as local wine producers and lovers alike prepare for 2019, celebrating Virginia’s 400th anniversary of winemaking history. For it was in 1619 that the first vines were planted in Virginia, with the hope and pursuit of producing the first American wines. To honor this milestone, a very special wine project was created and an equally unique wine was born. Virginia’s Heritage is the name given to both the commemorative endeavor and its dedicatory wine.

Shepherded by the venerable Virginia wine producer Chris Pearmund of Pearmund Cellars in Broad Run, Virginia’s Heritage is a collaboration of sixteen of Virginia’s finest wineries. Pearmund asked that each producer contribute one to a few barrels of their best red Bordeaux-varietal wine, with the caveat that all fruit must be 100 percent Virginia sourced and harvested in either 2016 or 2017. In all, 10,000 bottles (more on that later) were assembled in August of this year, all from the finest (red) wine grapes that Virginia has to offer, including Merlot, Cabernet Franc and Sauvignon, Petit Verdot, and even Tannat…thank you, Madiran! 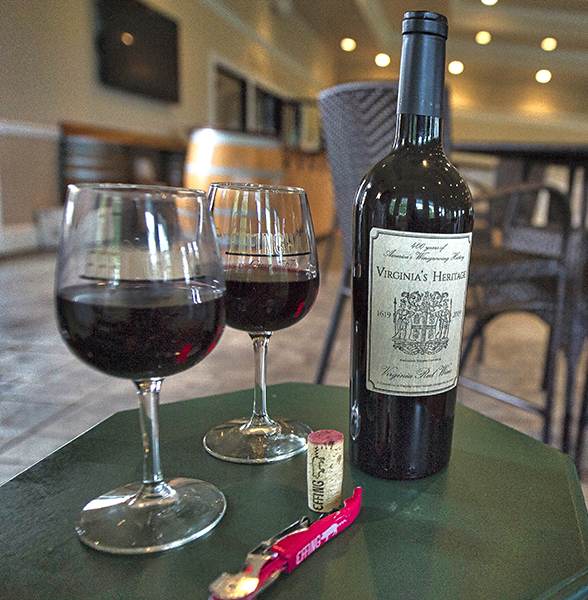 Aged in Virginia oak barrels, Virginia’s Heritage Red Wine is an elegant, cultured blend, produced by “A Consortium of Virginia’s Finest Wineries Contributing in Unison,” as noted on the front of its beautiful birchwood label. The back label, also made of birchwood, is a peek into the heart and soul of this project. It reads:

In the year 1619, Vitis Vinifera vines were first brought from Europe to America with the intent to produce wine in Virginia. Eight vignerons were brought from France to set the stage for a thriving wine industry 400 years later. Virginia’s Heritage is a celebration of this historic event. This limited-edition Virginia wine is a blend from many of the state’s finest wineries, in recognizing Virginia as the cradle of American Winegrowing.

Perhaps you’re wondering, what is vitis vinifera? Well, in its simplest and most literal form, vitis is the genus of the plant kingdom that includes the vine, and vinifera is the European species (of vitis) that is the vine most used for wine production.

To understand the significance of this, a little Virginia history is in order.

As I was taught in school, and learned again in my visit with Pearmund, an avid historian, Virginia was the first permanently-settled English colony in North America. It was named “Virginia” in 1584, in honor of Queen Elizabeth I, and is thought to have been coined by Sir Walter Raleigh, for whom Raleigh, N.C., was named. In 1607, members of a London-based venture called The Virginia Company were sent to the new colony and ultimately founded Jamestown. The next few years were near catastrophic, however, as famine, disease, and conflict consumed the new locals. But, more settlers and supplies would arrive in 1610, eventually stabilizing a desperate environment and bringing a renewed vigor of growth.

As English interests in expanding colonization were strong, self-sustaining growth was imperative. But in order to obtain fine products such as wine, silk, and olive oil, England had to pay cash to rivals Spain and France. Having its own resources in a new colony, however, would eliminate this unwelcome reality, so a decision was to be made.

Tobacco quickly became Virginia’s first profitable export, and its financial impact was significant. But Jamestown locals maintained the belief that Virginia could also become a major source of wine for the British Empire, and in 1619 the newly formed House of Burgesses – predecessor to today’s Virginia General Assembly – enacted a law expressly requiring that each landowner ‘yearly plant and maintain 10 vines until they have attained to the art and experience of dressing a vineyard either by their own industry or by the instruction of some vigneron.’ This law was called the Twelfth Act of the Original Acts, and was the earliest documented effort to transplant European vines to eastern America. That very year, 1619, eight vignerons (French for vine grower) were sent to Virginia to plant vines and thus, the Virginia wine industry was born.

By 1621, ten thousand vines were brought from Europe by The Virginia Company, and this is the inspiration for the number of Virginia’s Heritage Red Wine bottles produced.

Over the ensuing decades, vines were often lost as a result of failed harvests and the plant-eating louse, phylloxera, yet wine growers would persist in Virginia. Notable figures such as Charles Carter, often touted as the founding father of American wine; Thomas Jefferson, of course; and Dr. Daniel Norton, whose name is synonymous with Virginia’s most famous indigenous red wine grape, would help shape and define the Virginia wine landscape forever.

The Prohibition era dealt a heavy blow, and it would take decades for the industry to recover. But new and successful plantings of vinifera in the 1950s would be a turning point for Virginia wine. That said, it was still illegal to grow grapes and make wine on the same property, and that would last another 20 years. The law finally changed in the early 1970s and as a result, six new wineries emerged. The Virginia wine industry never looked back. By 1995, there were 46 open for business and by 2005, there were 107, a phenomenal growth rate by any standard. Included in all of this is the Virginia Wineries Association (VWA) formed in 1983, which, as highlighted on its website, “grew out of the desire by owners of Virginia wineries to create a wine community that shared ideas and resources to the benefit of everyone in the Virginia wine industry.” Its annual wine competition, The Governor’s Cup, honors the best wines and brightest talent in the Virginia wine industry.

Today, Virginia ranks fifth in the nation for wine grape production and sixth for number of wineries, with upwards of 300 that are open for business. There are seven AVAs (American Viticultural Area) that pepper the state, with each geographical designation showcasing the grapes that grow best and the wines they produce.

Which brings me back to our sole wine of the month and the partners who helped to create it.

I had the privilege and true pleasure of tasting Virginia’s Heritage Red Wine on the day it was bottled at Effingham Manor and Winery, a second Pearmund winery in Nokesville. It was August 14. The wine was aged and blended at the beautiful, historic estate, and the excitement of watching the first bottles get filled, labeled, corked, and sealed will stay with me for years. The glass I had with Pearmund and the crew was an equally nice moment.

As for the wine’s composition, Virginia’s Heritage Red Wine is a Bordeaux-esque blend, comprised in approximate percentages of 50 percent Merlot, 20 percent Petit Verdot, and a 30 percent collective of Cabernet Franc, Cabernet Sauvignon, and Tannat, a personal favorite. The barrels, as mentioned before, were of 2016 and 2017 harvests; as it turns out, more than 90 percent of the fruit is from 2016.

Pearmund shared with me, “Texture is really important, as is the diversification of flavor. I think we’ve achieved that and I’m very excited about this wine!”

Winemaker and Narmada Winery co-owner Sudha Patil, who also contributed a barrel of the predominant Merlot, added, “In Virginia, Merlot is a special grape because it ripens early, doesn’t get hit too hard, and it’s a very flavorful fruit, you can actually eat it!”

I completely agree, as all the varietals themselves showed up, ready to perform.

In my tasting, I immediately noticed the dense ruby color, with a very light purple on the rim. Being freshly bottled, this wine was a newborn. After several wrist-swirls, I stuck my nose deep into the glass and was taken in by a big wash of dark red and black fruits, an innocent shadow of Virginia oak and faint hints of both herbal spice and mint leaf. There was a rustic nature to the bouquet and it took me back to a log cabin in the woods that I lived in years ago; and for second there, I thought I might’ve just poured myself a glass of Rioja! 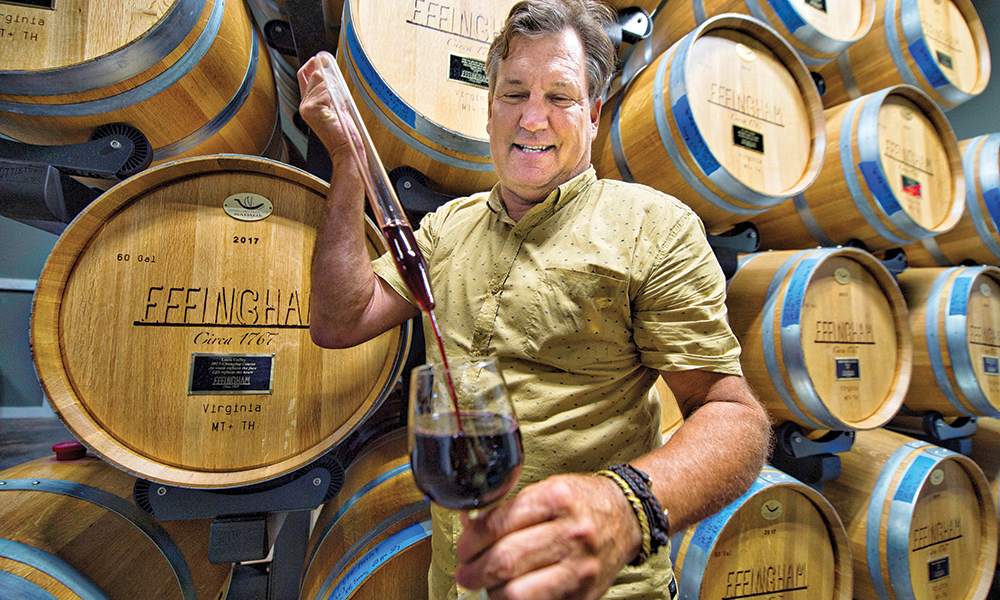 On the palate, the wine was lively and fresh, medium-bodied with good up-front acidity and splashy fruit. As expected from a young, tight wine, with both Petit Verdot and Tannat in the mix, there was a tannic presence towards the back, but the Merlot kept it under control. What caught me the most, however, was the balance of the wine. Nothing stood out too much, nothing was lost. And with an ABV level just under 13.5 percent, I have no doubt that this wine will age beautifully for the next several years.

As I mentioned earlier, the wine labels are printed on thin sheets of birchwood. Additional packaging reflects Colonial roots and the wine bottle is rested in a Virginia-made commemorative box, surrounded by ribbon shavings of the same birchwood. The cover label on the box is a reprint of the 1619 Virginia Company seal. The entire presentation is beautiful. The wine will be featured at both the Mount Vernon Fall Wine Festival this month and at the Virginia Executive Mansion, in Richmond.

From its onset, Virginia’s Heritage has been a collaborative effort, and its undertaking wouldn’t have happened if not for the contributions of the 16 wineries involved. Each of these wonderful destinations, located throughout the state, bring their own unique story to the grand table of Virginia wine, and I encourage you and yours to travel to these places, meet the families and friends who run them, and share in their gifts of award-winning wines and friendship.

Virginia’s Heritage and its commemorative, eponymous wine are a true reflection of our great Commonwealth, and all that she represents…shared roots, pride and purpose.

And I think Pearmund said it best when he remarked, “It really takes a community to raise a foal, and this wine is a child of all of us.”