The Charlottesville winemaker produces some of the finest Virginia wines in existence. 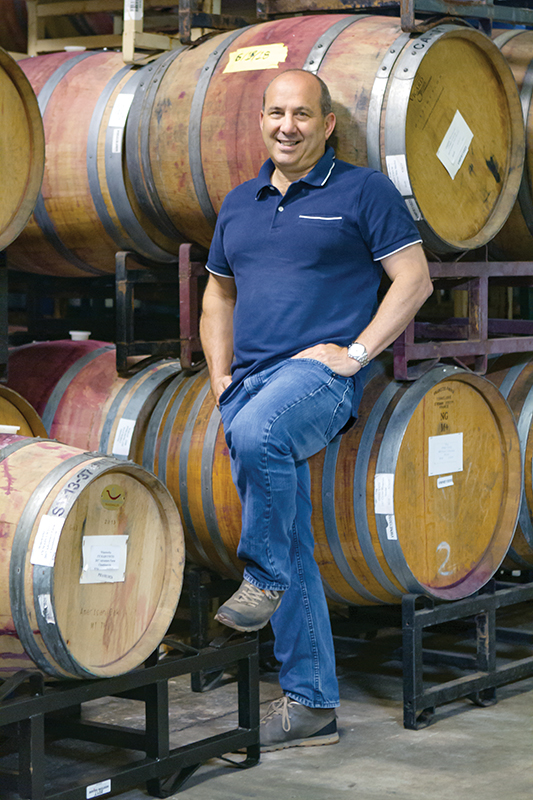 Michael Shaps has a lot going on. For years, the Michael Shaps label has produced many of the finest Virginia wines in existence, consistently winning countless medals at the prestigious Virginia Governor’s Cup competition. He also makes 250 different lots of wines at Michael Shaps Wineworks in Charlottesville, most of which are for other wineries. He also produces a line of burgundies in France under the Maison Shaps label.

My first taste of his wine was the Michael Shaps Petit Manseng, which was a completely new Virginia white wine experience, and I found it outstanding. I first met him on a 2016 visit to his winery, where he joined us in the tasting room with a warm welcome and generously opened several bottles that weren’t on the tasting menu. The quality of the wines was apparent across the board. The Wild Meadow Chardonnay and red meritage both stood out as exceptional. I was lucky enough to catch up with Michael again this year. It was a rare opportunity to get the past, present, and future of his winemaking journey directly from the source.

The early years are a fascinating story. To summarize, Shaps was “bitten by the bug,” as he put it, in the mid ‘80s while working at top restaurants in Boston. Early on, he decided making wine was his path. This transition from restaurants to winemaking is not uncommon. It is, however, usually over a decade in the making. Undaunted, Shaps set his sights on viticulture school in France’s most prestigious wine region: Burgundy.

It took a prolonged and concerted effort to convince dubious school authorities to award him a space in their work/study program. They finally agreed to let him try in 1990. He spent two hands-on years there, immersed in learning the craft. Quite an accomplishment, especially considering Monsieur Shaps’ endeavors to learn French before the program hadn’t met with success. His is a quintessential American story of hard work and determination “bearing fruit.” On completion of the impressive apprenticeship abroad, he returned Stateside and began looking for opportunity. In his own words, he was “kinda cocky” as he sought a winemaker position. He wasn’t about to start at the bottom to work up and soon understood this largely ruled out potential employment on the West Coast.

I asked how his path led to Virginia. “In 1989, Wine Spectator magazine had an article on Virginia as an up and coming wine region,” he replied. To my astonishment, he pulled out that very issue of the magazine. Back then, it was printed on a large broadsheet format. He leafed through the pages to the article and pointed at a photo. “This is our neighbor, Mike Boles, with Montdomaine, where I ended up,” he added. “People told me I was crazy to come to Virginia.” There were 42 wineries at that time, compared to some 280 at present. He initially worked at Jefferson Vineyards and was quickly consulting for others with the increasing demand for expertise. Michael’s first Virginia vintage was 1995.

The Michael Shaps label debuted in 2000, when he partnered with King Family Vineyards. For the next seven years, he would make wines for both the Michael Shaps and King Family labels at their facility in Crozet. In 2004, Shaps and a partner from his viticulture school days started a winery in the heart of Burgundy, making him Virginia’s first, and to my knowledge, only, “flying winemaker.” This is an industry term for persons who produce wine in different spots on the globe. Flying winemakers are well acquainted with jet lag and accrue enviable amounts of flyer mile points. The Maison Shaps label produces many different Burgundy wines.

In 2007, he and a former partner purchased the Montdomaine winery, the same location that was featured in that old Wine Spectator issue. The old Montdomaine sign still hangs inside the Michael Shaps Wineworks door. With his own equipment and space enough to produce far more wine than his own, he delved into contract winemaking, making the wine and managing the vineyards for other wineries. This grew very quickly and at one time there were even clients from neighboring states. Michael Shaps Wineworks now produces wines from a wide range of varietals for himself and 17 clients.

To me, the concept seems not just daunting, but miraculous, especially at harvest. Harvest time is always nearly round-the-clock, “all hands on deck” crunch time for every winery. “In most wine regions, harvest lasts a week or two,” Michael explained. “For us, it’s late August to late October.” There have been three expansions at the facility over time that have made the operation more manageable, and precision management, software, and barcode implementation have played a heavy role in the efficiency of the operation.

Michael Shaps Wineworks has relocated two old tobacco barns to the property. These serve a dual purpose: to dry grapes for the passito style dessert wine called Raisin d’etre, and also to mitigate rain damage during harvest. Grapes can absorb water and become diluted if it rains at harvest, and Shaps uses one of the old barns for machinery that uses reverse osmosis to remove some of the water. He feels it adds some complexity to the wine.

I asked Shaps about his future plans. “We’re in the process of buying Shenandoah Vineyards,” he replied. Founded in 1976, Shenandoah Vineyards is one of the oldest wineries in the state. It’s also one of the few spots planted to riesling. “It’s got great soils with less clay and more limestone,” he said with enthusiasm. “We hope to set up shop there this fall.” The Shenandoah region is cooler and drier than Virginia’s other wine growing areas; Master of Wine Jay Youmans flagged the Shenandoah Valley as the area with the greatest untapped potential for wine in our state.

Before I left, we tasted through what is currently available in the tasting room. Fresh tropical notes and a creamy elegance reminded me how superb the Petit Manseng wine is. His Viognier and Cabernet Franc are some of the best examples out there. This was my first taste of the intriguing and complex L. Scott red blend. This wine has quite a bit of the Tannat grape, a little known varietal native to southwest France that is showing great potential for Virginia vintners.

A week after visiting with Shaps, I paid a visit to Wineworks Extended, the warehouse and retail location. A small parking lot and charming wine bar at the entrance nearly disguise the immense warehouse behind. There are two menus of four wines each on offer, from Virginia and France. The first menu features wines that come directly from kegs, from which locals can have growlers refilled with the wine that’s on tap each week. These Virginia wines are under a separate label from Michael Shaps, simply called Wineworks. All were good quality and reasonably priced, with the fresh and lively Viognier being my favorite. The other menu is from bottle. Morgon was my favorite from this menu; it had great concentration, fruit, and depth. The Michael Shaps Odette, a white blend, was intriguing and delicious. The “baristas,” Lauren and Jim, were pleasant and knowledgeable behind the bar. I also got a peek behind the wizard’s curtain to see the keg room and voluminous barrel storage, which provided further insight into the scope of the Shaps operation.

If you enjoy Virginia wine and have yet to try the wines of Michael Shaps, it’s time to get on board. I definitely suggest a visit to both Michael Shaps Wineworks and Wineworks to enjoy some of the best wine Virginia has to offer.