The span offers an emotional connection between the present and the past.

There’s something about driving over a historic bridge with one lane and the clickety-clack of wooden boards. The kind of bridge that carries old spooky stories passed down from one generation to the next.

The Waterloo Bridge, also known as the “Ghost Bridge,” on Route 613 offers this type of experience. Or rather, it used to, and hopefully will again soon. 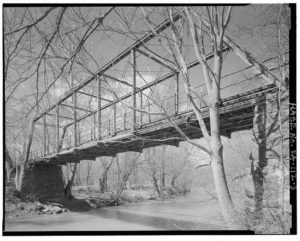 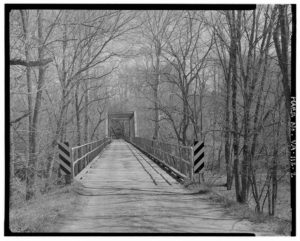 Listed on the National Register of Historic Places, the Waterloo Bridge has spanned the Rappahannock River, which connects Fauquier and Culpeper Counties, since 1878. Built by the Pittsburgh Bridge Company, the Pratt through-truss structure is an example of late 19th-century ingenuity and the oldest remaining metal truss in the Virginia Department of Transportation’s road system.

VDOT shut down the bridge on Jan. 15, 2014, due to safety concerns. Just prior to the closure, The Piedmont Environmental Council reached out to preservation groups and individuals about the the potential loss of the historic structure.

“The response was an outpouring of support for saving the bridge that grew exponentially after VDOT closed it,” said Julie Bolthouse, PEC’s Fauquier County field representative. “Students of Kettle Run High School’s history teacher, Richard Deardoff, who encouraged them to take action to spread the word to save the historic structure, created the ‘Save the Waterloo Bridge’ Facebook page, which now has over 2,850 followers. PEC created a petition that has over a thousand signatures, and elected officials at the state and local level have received hundreds of letters of support.” 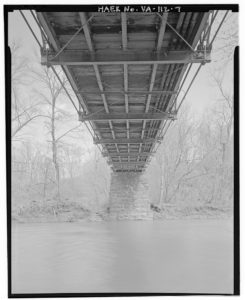 Stringer and Beam System underneath.

In September, 2014, Fauquier County and PEC commissioned a study of the structure, and discovered it was a great candidate for rehabilitation and that VDOT’s estimate was inflated by soft costs, according to Bolthouse. In response, VDOT commissioned their own study, which resulted in a 25 percent decrease to their original cost estimate.

“I see the value in historic bridges similar to the value of historic downtowns versus new shopping centers. They both satisfy the use needed, but one is pretty cookie-cutter and commonplace and the other is unique in design and construction, filled with background history and built in an era when things were meant to be repaired rather than replaced,” said Bolthouse.

Until this past year, there had been little movement or financial support for rehabilitation.

“It hasn’t been easy to secure funding, since the state doesn’t have dedicated funding sources for rehabilitations of historic bridges. The project had to compete in categories of congestion mitigation and safety improvement, which it scores poorly on,” said Bolthouse.

In early 2017, local residents Russell and Joan Hitt made a pledge of $1 million toward the project. With the pledge, VDOT indicated it might be possible to move forward without a contribution of funds from either Fauquier or Culpeper county. However, a resolution of support from one of the counties was still needed to push efforts forward. On Nov. 9, 2017, the Fauquier Board of Supervisors held a public hearing to decide whether to adopt a resolution supporting an application for a cost-sharing project with VDOT.

The hearing had close to 100 attendees, many of whom wore bright yellow “Save Waterloo Bridge” stickers. PEC, Scenic Virginia and a number of residents gave public testimony, including Russell Hitt, who offered a touching account of his family’s history with Waterloo Bridge.

“I guess this bridge is very important to me because my family goes back a long ways. Albert Hilleary Hitt, my great great grandfather — we have his land — he had to go down this road, the Waterloo Bridge, to take their grain and so forth to be ground at the mill that was there. And all of our family has had to do the same since the 1800s, because we’ve been here since the 1800’s. So, it’s a long family tradition of going down this road. I miss going up and down the road and across the bridge and hearing the tires rumble on the boards, it’s kinda nice. Don’t have many of those today,” said Hitt, as he stood with his son-in-law before the Board of Supervisors.

A resolution of support was passed that night.

The proposed cost-sharing agreement will now move forward to the Commonwealth Transportation Board, and they will decide to approve it or not by next June.

“It’s been a four-year fight, but it’s becoming more and more likely the Waterloo Bridge will be rehabilitated for vehicular traffic in 2018,” said Bolthouse. “We are hopeful that the application will score high in the process and the CTB will decide to ultimately approve it for funding, which would allow the rehabilitation to begin.”

Since the 1970’s, half a dozen metal truss bridges in Fauquier have been removed, including the bridges over the Rappahannock River at Kelly’s Ford, Springs Road, and Tapp’s Ford.

“Some have asked me why the Waterloo Bridge is so special, and I usually respond by saying ‘It’s the oldest metal truss, and one of only a couple dozen that remain in Virginia.’ However, that isn’t what has brought about this outpouring of support to save the bridge. Although residents are interested in the history, I think what brings out their passion is the sentimental connection they have to it. The bridge holds a special place in their childhood memories and is a distinct and special landmark of where they live, which visitors also get to enjoy and remember.”

Fauquier County native Paula Combs studied journalism and communications at the University of Colorado. Her career began in film production in Los Angeles, but she later transitioned to the environmental field. She returned to Virginia in 2014 and became the senior editor for The Piedmont Environmental Council.