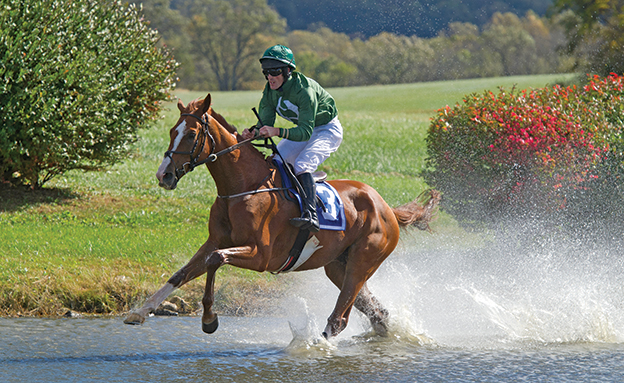 Many horses run in Piedmont steeplechases, but how many are true Piedmonters—bred from local sire and dam, born, raised, trained, and then raced in the Piedmont?

Meet Zanclus, an eye-catching 17.1-hand chestnut Thoroughbred gelding (by Xenodon out of Jordani by Two Smart) owned and bred by Sara E. Collette of Pageland Farm in Casanova. Foaled on May 16, 2010, and raised by Collette and Cheryl Depriest at Pageland, he was put in training with Neil Morris, who is also Master of Orange County Hounds, at Hickory Tree Farm in Middleburg at the age of three and started racing at the age of four.

Depriest describes him as a big horse, lanky and leggy, who was slow maturing, but a wonderfully athletic horse who always knows where to place his feet when he runs. “He’s very striking, and he was always a sweet, sweet horse.  I’ve never known him to pin his ears or kick at anybody. I just love him to death, I still cry every time I see him race. He’s such a good boy.” Morris echoes Depriest’s words: “He’s just beautiful. He’s such an eyeful, just a beautiful-moving horse, very soft and elastic.”

Depriest adds, “Once he gets going … he has this incredibly long stride, so once he finds his rhythm, you know, the other horses are taking about a stride and a half to his one. He just covers an enormous amount of ground. He kind of jumps the same way, he’s big and it’s just like whatever you put in front of him, he just springs over.  There’s no question about his clearing it and it looks like he puts forth no effort.” Zanclus’ stride, once he settles in, makes him an excellent contender in longer races. He’s very comfortable in the three-mile races, says Morris.

He ran first in flat races and hurdles, but didn’t seem to be especially promising. Collette says, “We first tried him over hurdles [which are the smaller jumps] and he wasn’t interested. He did it but if anyone wanted to pass him he thought that was quite alright. Now he is a competitive horse, he wants to win. It’s hard to restrain him… Neil hunted him and there he’s always in front and he decided he likes it, which is where you want him to be at the end.” 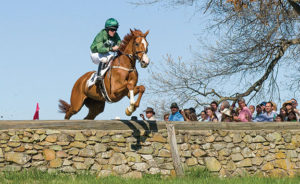 At the Oatlands Point-to-Point in 2016, Zanclus was the winner of the 3.5-mile William Corcoran Eustis Cup open timber race. 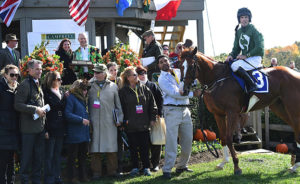 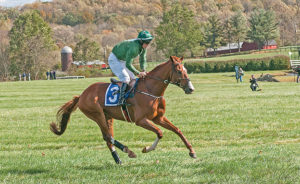 Sara Collete’s Zanclus went wire to wire in the $40,000 Steeplethon 3-mile timber race at Great Meadow, The Plains on Oct. 22,2016. Trained by Neil Morris and ridden by Kieran Norris, Zanclus was on the lead through the entire race, drawing off by 15 lengths at the wire. Photo by Jaclyn Dyrholm

After a year off when they looked into selling him as a three-day event horse, Morris says, “We started running him over timber, and that’s when he really started to shine and show his greatness. He just needed a little maturity is all, he’s a great big horse but he was a late bloomer. Over timber is his forte and it came at a good time in his life because he was ready and mature enough. Foxhunting with me in the off-season really turned him around. It matured him, and another birthday helped him as well. He just needed a little more time. He’s a big striding horse and it really didn’t help him over hurdles at all. He has a very long elastic stride. That really stopped him being quick and efficient as a hurdle horse when he was younger. As a timber horse, it proves an advantage for him; just the way of his going getting across the country is very easy. He’s just a relentless horse, with a relentless gallop, and he’s very efficient getting over the jumps. He’s been extremely successful over timber. Extremely successful. He’s always a live horse in a race. He’s just a pleasure to take to the races; it’s nice to have that level of horse to enter a race with. He’s got a lot of talent.” Zanclus started winning races in 2016, culminating in the Steeplethon Timber Steeplechase at the Great Meadow International Gold Cup.

Zanclus can be difficult, Collette explains. He has raced under a few good jockeys, but just didn’t get along with them. He races now under jockey Kieran Norris. She says, “Zanclus has firm opinions on some things, and is a little naughty in the paddock. He needs tact, and he and Kieran Norris have a real bond. A lot of riders are a little bit frightened of something this big. And when they start to pull their little tricks like rooting and moving sideways and things like that they get worried. Kieran thinks he’s funny. And its worked out very well and he’s improved. I don’t know if this year he will behave like a perfect gentleman or not.” 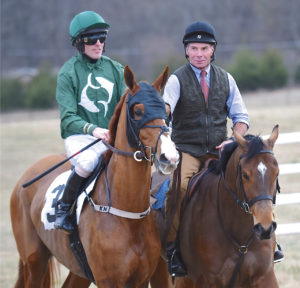 Morris speaks highly of Sara Colette’s breeding program. He says, “Bless Sara and Bruce for their patience in breeding these late maturing but long distance grass horses. They are particularly good at it.” Zanclus’ full brother, Erycx, is a promising four year old also in training with Morris. “We’re pretty excited about him,” he says. “He’s had two wins on three starts in flat races. We are very fond of him too and hopefully he has a bright future.” Collette has owned the dam for generations, and also bred the sire. All the resulting horses from that breeding combination have the same distinguishing characteristics. According to Collette, “They’re all large, good jumpers, have pleasant dispositions, and are sometimes a little scatterbrained. Their distinguishing thing is stride, enormous strides. It seems they are born knowing how to jump. But since they are such big horses [Zanclus was about 11 hands when he was born], they don’t fully mature physically until they’re about seven.”

Collette’s horses run under jockeys wearing green silks with white circling dolphins. Her husband is a fish zoologist and, he says, since he is funding the breeding program, he gets to name the horses. Hence, the horses are all named after fish.

What’s in the future for Zanclus? After taking a year off due to an injury, his 2018 starts will include Orange County Hounds point to point, My Lady’s Manor, and Great Meadow, either as a Steeplethon or Gold Cup contender, depending on how his preliminary races go. According to Morris, “We want to make sure he’s back to where he was.” He concludes, “He’s a fine racehorse with a bright future, and hopefully he has plenty of years of racing ahead.” Look for him at the races this year, and cheer on our local homebred!

Share on FacebookShare on Twitter
« With Love, the Waterloo Bridge
A (Four) Hands Down Winner of a Dinner »