…Move Foxhunting  into the Future 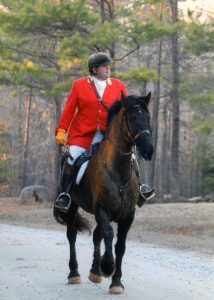 Twiggs in his role as Master of Foxhounds. Courtsey of MFHA

He calls it the “shadow sport” because it’s not highly visible or well understood by those who are non-participants. He aims to do something about that. So, the venerable Masters of Foxhounds Association of America (MFHA), foxhunting’s governing body in the U.S. and Canada since 1907, will remain a fixture in Virginia’s Piedmont, but with a new executive director and a new headquarters in Middleburg.

A genteel North Carolinian, David Twiggs assumed his post in April after a long career in outdoor sports, conservation, sustainable community planning, and tourism promotion. And lots of foxhunting.

Over the past few years, the MFHA has been contemplating a move from its offices in Millwood, Clarke County, to a more accessible spot. The group looked at other possible sites in Virginia and Kentucky but settled on Middleburg, which boasts of being the epicenter of foxhunting in the U.S. It seemed like a natural fit.

When renovations are complete, the MFHA and its newly minted executive director will be ensconced in a nearly two-centuries-old stone house with a rich history of its own and proximity to the National Sporting Library and Museum, other important equine venues, and about 15 of Virginia’s 25 recognized foxhunting clubs.

Twiggs is enthusiastic about the project and says the facility will serve not only the foxhunting community, but also establish itself as a center for public education about the sport. “We need to do a better job of educating the public as well as our own hunt fields,” he says. “We’ve got good stories to tell, especially about our land conservation and preservation programs. We just need to get the word out.”

Twiggs also is eager to make foxhunting “more relevant” in the sporting world because he believes it to be as legitimate a sport as any other, but with fewer players than more mainstream athletic activities. He’s particularly focused on making the sport more “relevant to younger populations.”

In addition, Twiggs says he has already begun working with the state’s department of tourism to stress the economic benefits associated with foxhunting, including breeding and raising hunting horses, encouraging hunting tourism among out-of-state foxhunters, and developing retail and wholesale businesses that support the sport.

The plan is to have the new headquarters open to the public at least three days a week for exhibitions, displays, seminars, and other educational programs. The building also will house the MFHA’s offices, board room, conference rooms, and the MFHA Foundation. Also included will be a museum featuring foxhunting artifacts and memorabilia from centuries past. The sport has been followed in Virginia since the end of the 17th century. 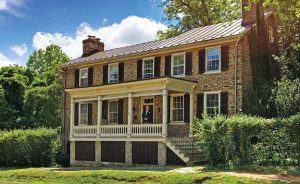 The MFHA’s new headquarters in Middleburg is a two-centuries-old home with many ties to history. By Gus Edwards

The building itself, known as the Chancellor or Allen House, has been home to a couple of Middleburg mayors since the early 1800s. It’s one of the first buildings that comes into view when entering Middleburg from the east on Route 50. The building reflects the prevailing architectural style of the 18th and 19th centuries and was built of local stone, much like the Red Fox Inn and other ancient and significant town structures. Most recently, it was owned by the Middleburg Museum Foundation, but was acquired by the MFHA when the museum foundation decided not to move ahead with its plans.

Fittingly, the building has a history as rich as that of foxhunting. It was the home to Lorman Chancellor, the town’s Civil War-era mayor, whose family gave its name to Chancellorsville. Current Middleburg Mayor Betsey Allen Davis’s family occupied the house for 50 years.

Perhaps the most important historical aspect of the house is its connection with John Singleton Mosby, the Confederate “Gray Ghost” of Civil War fame whose guerilla exploits against the Union Army became the stuff of legend. Historians note that Chancellor and Mosby were, if not good friends, at least well enough acquainted to share an occasional meal. Chancellor was an officer in the Virginia Militia while Mosby served as a cavalry officer in the Confederate Army. In 1862, Mosby and a group of horse soldiers from the Middleburg area formed what became known as Mosby’s Rangers. Legend has it that Chancellor allowed Mosby to hide in his attic from time to time to elude Union forces out to capture him and end his career of harassment.

As the story goes, Chancellor and Mosby met at Chancellor’s home for dinner one night in March 1863. It was during that dinner that Mosby hatched one of his most ambitious exploits: the capture of a Union cavalry regimental commander while he slept in a camp nearby. The plan failed as Mosby’s target had left the camp before he got there, but—ever resourceful—he salvaged the mission with the capture of a different Union general.

“Yeah, this is quite a place,” says Twiggs as he shows off the extensive garden that lies behind the house. “We can have some great events out here.”

He’s looking forward to the future and is eager to start the 18-month or so period that he figures it will take to restore and reconfigure the building. Meanwhile, Twiggs will operate from the MFHA’s Millwood offices as he begins to shape what he hopes will be a new era for foxhunting in America.