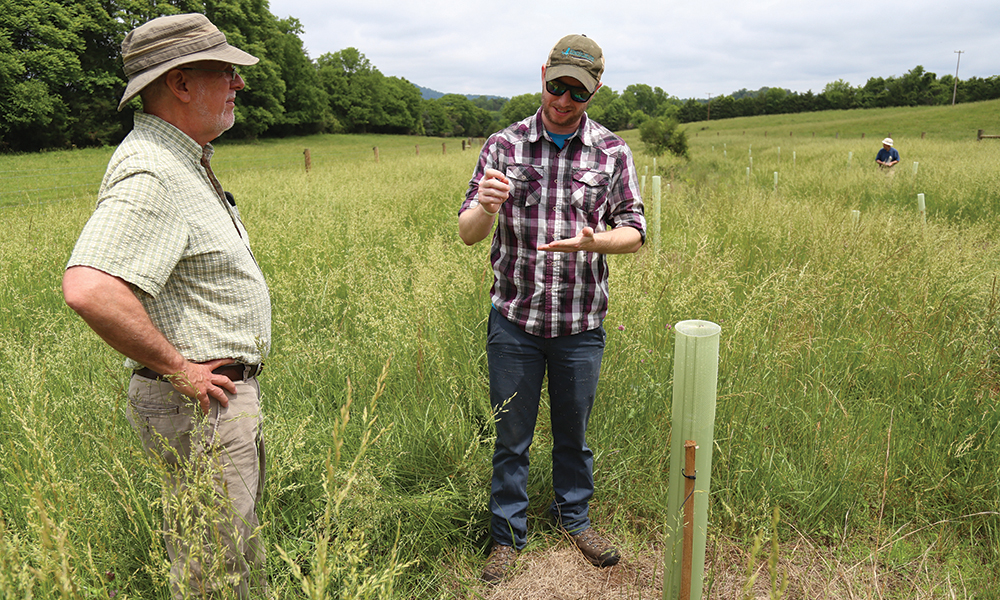 A pair of brothers continues a family’s stewardship.

Distracted by an iconic red barn sitting atop picturesque rolling hills, I passed the gravel driveway I was supposed to turn down. As I found my way back, I saw the very reason I was visiting the Goodall property in Madison County. Long rows of newly planted trees nestled inside light green tubes stretched along a tributary of the Robinson River.

I met with brothers Paul and Joe Goodall to discuss their family’s participation in the Headwaters Stream Initiative, a partnership program coordinated by Friends of the Rappahannock (FOR) and The Piedmont Environmental Council (PEC) to protect and restore the Rappahannock River watershed by working with landowners to plant native trees and shrubs and re-establish riparian buffers along waterways, which provide a healthy habitat for fish, wildlife, and livestock.

We met at what they charmingly call the Johnson Place, one of their farmhouses. The Goodalls pay homage to each family they purchased land from by continuing to call the property by the original owner’s name. The first, still referred to as the Goodall Place, was purchased in 1906 by Paul and Joe’s grandfather. Their father later purchased the Thomas Place in the mid-1930s and also the Johnson Place in the late ‘60s. All three pieces connect and come to approximately 600 acres, encompassing a variety of valuable landscape.

“The diversity on the property you get to see is pretty unique. You have a huge wetland area, a tiny creek, a farm pond, rolling hills with giant boulders, and cattle pasture and flat hayfields. And then you have the Robinson River. So many different ecosystems, all on the same property,” said Bryan Hofmann, programs manager at FOR.

“Dad was a very good farmer. A good dad, too. And he was very appreciative of the land, and kept trying to improve his agricultural practices,” said Paul.

Following their father’s footsteps and wishes, the Goodall brothers have continued implementing best management practices (BMPs). Through the Headwaters Stream Initiative, an astounding 3,765 trees were planted on 16 acres, including 4,600 linear feet of stream in the spring of this year. The partnership between PEC, FOR, Culpeper Soil and Water Conservation District (CSWCD) and the Virginia Department of Forestry (VDOF), along with more than100 student volunteers from six schools, made this project possible.

“It was, far and away, the largest single-season planting we’ve done,” said Peter Hujik, field representative for PEC. “I enjoyed working with the Goodalls, and it was great to see so many students involved.”

As part of a different clean water effort, the Goodalls worked with CSWCD to install a mechanical watering system for cattle and approximately 1.5 miles of fencing.

The brothers are already planning for their next steps. “We are definitely going to fence off the streams on the east portion of the Thomas Place; and we’re interested in tree-planting over there, too. So, hopefully, next spring we can have a reprise of this,” said Paul.

The Goodall family not only planted seeds to grow trees — literally by their own hands and shovels — but clearly a seed of love for the land was planted long ago by their father. And it continues to grow to this day.