A Look at Significant Saved, Lost, and Threatened Historic Bridges in Virginia’s Piedmont

Traveling the backroads on Route 613 from Warrenton to my in-laws’ farm in Sperryville, the familiar, melodic “thump, thump, thump” going over Waterloo Bridge still rings clearly in my mind, even though the bridge has been closed since early 2014. For a moment, during each trip over the bridge, I was instantly transported back to the late 1800s as I imagined a horse and buggy carrying me across the beautiful metal truss bridge over the Rappahannock River, as hundreds of the bridge’s previous travelers had done since its construction in 1878.

Each of us has a story familiar to this one. A bridge in your hometown that perhaps you fished off of with your father or older siblings growing up. A bridge that you crossed on long road trips with your family, whose, “ka-thump, ka-thump, ka-thump” etched a song into your memory that will forever connect you with that particular place. Perhaps there is pedestrian stone bridge over a familiar trail like the Washington & Old Dominion, that you walked daily.

That is the incredible power of structures like historic bridges. They can connect us to a place and transport us back in time. They become a part of our personal experiences and our collective memory within a neighborhood, village, or even larger community.

These special places are now under great threat, however. Of the metal truss bridges surveyed in Virginia by the Virginia Transportation Research Council (VTRC) in 1975, more than 90 percent have been lost to date. Of the masonry and concrete arch bridges surveyed by VTRC in 1984, at least 75 percent have been lost. The greatest threat to these bridges is replacement and, indeed, the vast majority of pre-1930 bridges have been determined structurally deficient or are already on the chopping block for removal and replacement. Part of the issue is that the pots of money that the Virginia Department of Transportation has for road work can only be used for bridges that meet certain safety criteria and other modern standards. Almost none of our historic bridges are able to meet that criteria, which means that it is easier to replace than rehabilitate them.

Over the last decade, The Piedmont Environmental Council has been a champion for these special historic resources, while working with the community, VDOT, and others to push for their rehabilitation rather than their replacement. Below are several examples of successful stories where bridges were saved, of bridges lost and of bridges that are currently threatened.

Piedmont’s Most Historic Bridges Still in Use 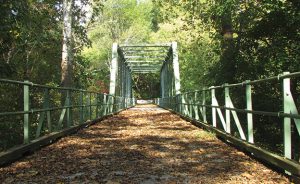 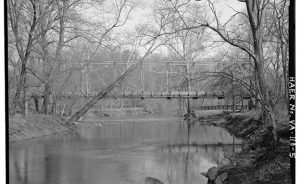 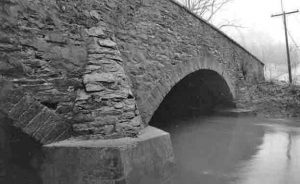 The Waterloo Bridge was built in 1878, making it the oldest metal truss bridge in VDOT’s road system. It is a distinctive iron and steel Pratt through-truss with a timber deck spanning the Rappahannock River linking Culpeper and Fauquier counties. The bridge was closed down on Jan. 15, 2014, due to its deteriorated condition. Prior to its closure, the bridge carried an estimated 680 vehicles trips a day.

Due to the pressure from supporters and a generous $1 million contribution from the local Hitt family, VDOT is planning to rehabilitate and reopen the bridge. The proposed project involves dismantling and removing the truss and making repairs, then reinstalling the bridge. The bridge piers will be repaired and the 15 approach spans will receive new steel beams and a timber deck. The project cost is estimated to be $4 million. The bridge is expected to be reopened to traffic with a 12-ton weight restriction. Construction is planned to begin in Summer of 2019 and completed by late fall 2020.

Built in 1889, the bridge was originally constructed on the Leesburg & Alexandria Turnpike (Route 7) over Goose Creek in Loudoun County. It was dismantled and reassembled in its new location over the Catoctin Creek in 1932. The one-lane bridge is a single span steel pin connected Pratt through truss with a timber deck and asphalt overlay, supported on stringers and floor beams. It was posted at 15 tons in 2004 and downgraded to 3 tons in 2014 due to “insufficient capacity.” The bridge currently carries an average of 57 vehicles trips a day. The bridge is listed on the National Register of Historic Places. VDOT held public consultation meetings and decided on a rehabilitation plan that will add a new pier and railing, and replace several deteriorated bridge members. VDOT’s plan is to begin right of way acquisition in spring 2020 and construction in spring 2021. The funding source for the $5.6 million project is not clear.

In 1810, the Virginia State Legislature approved $24,000 for construction of the Snickers Gap Turnpike between Aldie and Snickers Ferry. The 1829 annual treasurer’s report for the Snickers Gap Turnpike Co. states that the stone bridge over Beaverdam Creek, and parts of the road leading up to it, were completed at a cost of $3,500. Members of the Hibbs family purchased the property “at Beaverdam Bridge on the Snickers Gap turnpike Road…” in 1857. Shortly thereafter and since that time, the bridge was colloquially referred to as the Hibbs Bridge. This two- barrel, one-lane stone bridge has been rehabilitated and remains in use today as a fine example of stone masonry construction and a rare survivor of its type. It is Loudoun County’s third oldest bridge.

The Little River Turnpike Company (LRTC) was chartered in 1802 to establish a road from the Town of Alexandria to the ford of Little River, a distance of 34 miles. The road had been completed by 1811 and in 1817, the turnpike company sought to establish bridges over the several waterways that the road crossed over. The LRTC’s reports from 1826, 1827, and 1828 suggest that this particular bridge was completed by 1827. This two-span, double-barrel arched stone bridge still carries Route 50 over Little River as it has done for nearly 200 years. It is the only bridge of its type still in use along Route 50.

Bridges that were lost 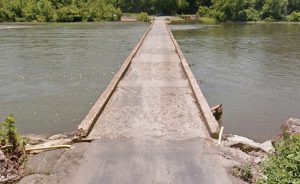 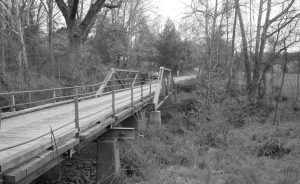 Built in 1913, this bridge was a five-span, 131-foot-long concrete bridge with solid parapet railings which have exterior molded panels. The center span included a unique girder and floor beam design combined with slab spans on either end. It was one of only three bridges in the state that combined the two types of technology in bridge construction — girder & slab. The bridge was named for the Carrico family, who acquired the surrounding property about 1860 and established a productive mill on site. The milling operation was on the southern bank of Mountain Run, making a bridge necessary for hauling wagon loads of product to northern markets. The bridge remained in operation until it was slated for demolition and ultimately replaced with a modern structure in 1999.

Crossing the Shenandoah River in Warren County, the Morgan Ford Bridge was constructed in 1925 at one of the earliest known river crossings in the area. The crossing at various times had operated as a ford, later as a ferry, and the c.1925 bridge was the first known substantial structure at the site to allow vehicles to cross the river.

The area surrounding the bridge was home to one of the area’s earliest known free African-American settlements. According to early records, strong evidence suggests that beginning in 1795, the emancipated slaves of Robert Carter, III, who once worked on his Shenandoah River plantations, moved to this site and established a community, known interchangeably as Leeds Town or Smoke Town. The town continued to thrive up through the 1860s. By the late nineteenth century, little above ground evidence of the community remained.

The Morgan Ford Bridge was slated for replacement due to deterioration and capacity issues in 2013. The bridge was ultimately replaced with a two-lane structure, eight feet higher in elevation than the original. The new bridge and approaching spans on the southern side of the river were constructed over top a portion of the core of the original Smoke Town settlement, limiting the potential for future archaeology to learn about this early African-American settlement. While the community mourns the loss of this important resource, most agreed that the final bridge was a much improved outcome over earlier designs, respecting the character of the area and lessening the impact to the rest of the Rocklands Rural Historic District.

Sometime between 1914 and 1930 (local records indicate a 1914 construction), a 137-foot long metal pony truss, timber deck bridge was constructed to allow vehicular passage over the South Fork Hardware River along Secretary’s Sand Road (State Route 717). Framed by bucolic countryside with beautiful green fields and pastures, the setting around Secretary’s Sand Road Bridge has remained largely unchanged since the bridge was constructed. However, structural failure over time and lack of funds to rehabilitate the bridge ultimately led to the department of transportation slating the bridge for replacement in 2017. With the loss of Secretary’s Sand Bridge, only two truss bridges remain in service in Albemarle County.

Significant Bridges that are threatened 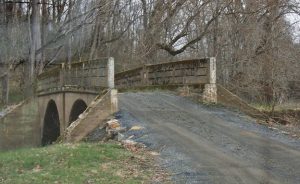 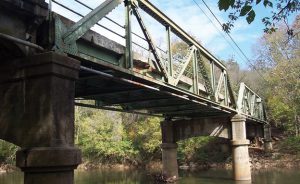 This Warren pony truss bridge was constructed in 1930 by the Roanoke Iron Bridge Works. It was a part of US Highway 15 (originally called Route 32) that extended from Clarksville, N.C., to Points of Rocks, Md., an important transportation route for moving agricultural goods through the state. This type of truss bridge was used by the Virginia Department of Highways as an economical means of crossing the state’s midsize drainages, usually in the more rural areas. Pony truss bridges are not as common as they once were in Virginia—this particular bridge is the only known pony truss still open to vehicular traffic within a surrounding seven-county region and the only remaining truss bridge constructed by the Roanoke Iron Bridge Works.

The bridge was built in 1919 by the Luten Bridge Company of York, Pa., as a single-span, rainbow arch concrete structure. The advent of modern concrete technology fostered a renaissance of arch bridge construction in the US, which was directly influenced by the early 20th century City Beautiful movement. Daniel B. Luten was one of the nation’s most influential bridge engineers, who patented several bridge designs. This particular bridge is thought to be a variation of Luten patent no.853,203. At one time, Luten Bridges were prolific throughout the US and Virginia. However, many have since been replaced, making this bridge notable as an early surviving example. The bridge is within the Cromwell’s Run Rural Historic District.

Constructed in 1917 to carry Bingham Mountain Road over the Lynch River, this pony Pratt full slope truss bridge is the oldest remaining survivor of its type that retains its integrity of location, setting, design and materials. Compared with other truss bridges in the county that have been altered or moved to a new location, this bridge has remained in service in the same location for more than 100 years. The bridge is not currently slated for replacement, but it is threatened due to lack of an eligibility determination for the National Register of Historic Places. The most recent rating by the Department of Historic Resources found that the bridge scored a 26 out of a needed 30 points to reach the eligibility for the National Register. Another look at the scoring for the bridge, focusing on the rarity of the resource in the immediate context and surrounding region and its high degree of integrity may provide the necessary additional points for the bridge to quality for listing. Listing on the NRHP would ultimately provide a higher standard and justification for rehabilitation of the bridge, rather than its removal, if slated for demolition in the future.