The Keswick Hunt’s famous clubhouse gets another (100-year!) lease on life…

What do you do with a 125-year-old building with a crumbling foundation, sagging joists, leaky plumbing, and bowed out walls? The fact that the ceiling had no insulation and a black metal roof probably saved the entire roof from caving in after huge snow storms over the years. A structural engineer pointed out that the tie rods running across the interior were the only structural elements holding the club together, and deemed the club “structurally insufficient.”

The question was: do you tear it down and rebuild it from the ground up? Or do you raise an extra half-million dollars to restore it? 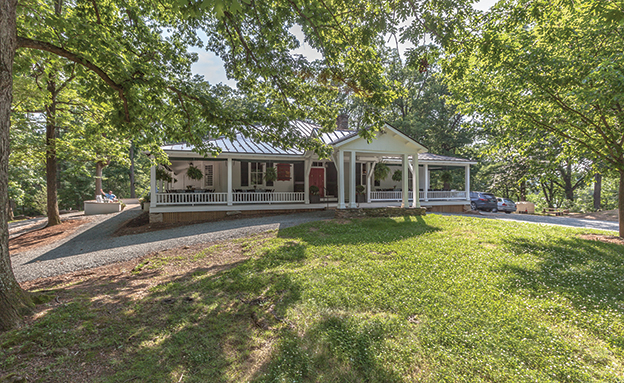 To the members of the Keswick Hunt Club, the answer was easy. The building was so intertwined with the community that everyone agreed it had to be saved. And not simply saved, but completely restored, the interior to be identical to what it looked like when it was first built in 1896—with the exception of the antiquated kitchen and decrepit bathrooms. To add space, a porch on one side of the club was to be enclosed and a terrace added to the porch on the other side. Otherwise, everything would be the same.

To understand members’ devotion to the club, you need to first get the lay of the land. Keswick is a 30,000-plus acre area just east of Charlottesville at the base of the Southwest Mountains with farms on both sides of the road (Rt. 231) that winds through it. White board fencing surrounds many of the farms and the stately and historic homes can be seen perched on the foothills at the base of the mountains. It’s not only a scenic extravaganza, it’s also a great home for foxes.

In 1742, the owner of Castle Hill Farm imported six pairs of English foxhounds and began hunting. Neighborhood farmers kept hounds and a number of private packs have hunted the area. But it was not until 1896 that foxhunting became formalized with the founding of the Keswick Hunt Club. With foxhunting came hunt breakfasts and social events such as the blessing of the hounds at Thanksgiving, the opening meet, the Keswick Horse Show and the board of governor’s annual dinner. One does not have to hunt to join the club, it has a diverse membership including fox hunters, retired fox hunters, community members, social members, and landowners. Speaking of landowners, people in Keswick who own farms support foxhunting and have increased the amount of huntable land, unlike some other clubs which have gone social because they’ve run out of territory to hunt.

Everyone enjoys the ambiance around foxhunting. And with the scarlet coats many of the hunters wear, the magnificence of huge animals leaping over tall fences, the hunting horn blaring, and the hounds baying away, it’s like being a member of Augusta even if you’re not a golfer. And don’t fret about the foxes, they are incredibly smart and wily animals who are seldom caught.

Part of the hunt-club atmosphere is the wonderful characters who have added interest, humor, and drama to it over the years and the colorful stories about them continue to weave members together. 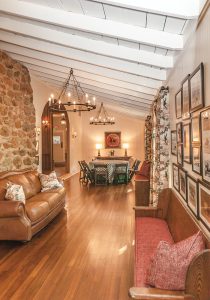 The first president of the club was a fellow named John Armstrong Chandler, a wealthy and eccentric philanthropist who was a great-great-grandson of John Jacob Astor. A year after his election, as Barclay writes, “his family had him committed to the Bloomingdale Asylum for the wealthy insane in New York.” The formal charter of the hunt club recorded: “President: the presently incarcerated John Armstrong Chandler.” Barclay continues, “He later escaped and was declared sane in Virginia but insane in New York. So he chose to stay in Virginia.”

Because his family had him committed, he swore revenge against them and changed the spelling of his last name to Chaloner. When his brother was cheated out of his fortune by an opera singer, Chaloner made national headlines with a telegram asking his brother, “Who’s looney now?”

In the late 1930s, Bill Perry, who had moved to Keswick just a short time earlier, was elected master of foxhounds. He was not only a good rider, had nice horses, was educated, handsome, and likeable, but his most appealing attribute was that he was rich. His great grandfather had amassed a fortune in silver, copper, and gold mines. The club had been short on funds for quite a while and Perry brought a dozen hounds and gifted horses to a number of members as well as shoring up hunt club coffers. As Barclay says, “He brought glamour and style to Keswick with friends like the actress Jean Harlow. He had two wives named Betty when he lived in Keswick. The first Betty was born in Kenya and Perry met her when he was on safari there. Barclay says she was beautiful, with long blonde hair and that “she was the wildest person who ever lived in the neighborhood.” “My father,” Barclay continues, “remembered a cocktail party where one of the guests was a reputed crack shot with a pistol. Betty stood with a lit cigarette between her lips, her profile to the marksman who took aim and fired a shot to put out the cigarette.”

Another colorful story that is treasured by the club members is about Alexander Rives, Barclay’s father. He was cantering around the ring on his horse during the horse show and a character named Mutt, who had a reputation for drinking, stood up on the fence surrounding the show ring and leapt onto the horse behind Rives when he rode by. Rives, unperturbed, kept on cantering until he got to the center of the ring where he stopped and calmly said, “Okay, Mutt, get off.” 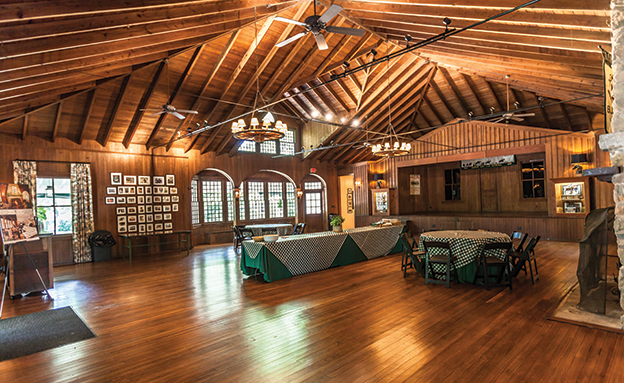 Then there’s the one about Stewart Burford, who was a chef and caterer and often cooked for club events. He was kneading a large lump of dough for dinner rolls when the phone rang. As he was talking on the phone, he noticed the dough was rising and beginning to spill over the edge of the counter. Holding his hand over the receiver, he yelled to his assistant, whose name was Ooze (can you imagine what he looked like?), “Ooze, the dough, get the dough!” But Ooze moved in the opposite direction. The dough teetered on the counter, almost ready to dive for the floor. Stuart was shouting, “The dough, get the dough.” Another of his helpers saved it just before Ooze flung open the back door, looked outside, then turned with a puzzled look on his face and said, “Ain’t nobody there.”

These stories and many more like them, get told and retold, strengthening the bonds between members and making the club’s history come alive.

Turns out the contractor selected for the renovation had his work cut out for him. Not only were the walls leaning outward but the original timber foundation had been totally undermined by generations of groundhogs who, unbeknownst to us, had joined the club over the years. To straighten the bowing walls, they had to pour new footers and install four-inch steel posts on top of them along the façade and sidewalls of the club and join them together with more steel posts running up the roof so that the entire club was encased in a steel superstructure. Putting on a new roof, replacing the siding and original interior beadboard concealed the steel framework so the club looked exactly the same as it did when it was built 122 years before. Except now it had an up-to-date kitchen, new bathrooms, HVAC, and is wheelchair accessible. 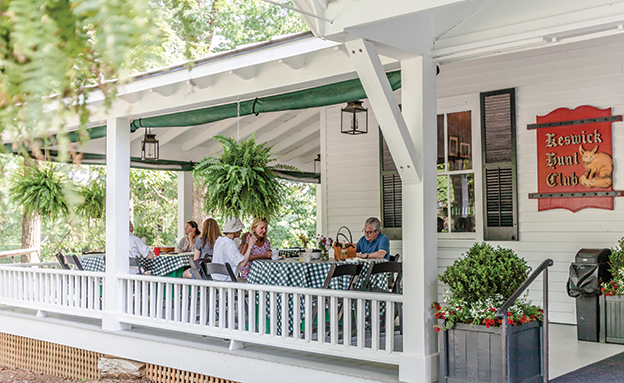 At 6:00 p.m. on Feb. 23 of this year, a hundred and forty pairs of eyes blinked and went wide as hunt club members walked through the front door of the renovated building. People were agog at the sight of the gleaming floor, the new porch dining room created from the former storage room and kitchen, the new curtains festooned with hunting scenes, and the 137 photos that had been cleaned, reframed, captioned, and hung in orderly groups on the walls.

As people toured the renovation, they were delighted by the men’s and ladies’ rooms, fresh, clean, and roomy with new lighting and handicap accessibility; the gleaming kitchen; new hallways painted a light cream color; and, finally, the new heating and air conditioning systems, which brought the hundred and twenty-two year-old club into the twenty-first century.

The musty, tired interior had been given a facelift and makeover without losing any of its character. Everything felt familiar but refreshed, like an old friend showing up in a sparkling new outfit.

Arnold and Ernest (the club’s longtime bartenders) were back behind the bar that had been lowered and refinished and the faded green naugahyde front removed, and Judy and Marika (Arnold and Ernest’s wives) were enjoying the spacious new kitchen. Earlier, when Judy first walked in, tears came to her eyes as she took in the sight.

Everyone involved in the project received hearty congratulations: from the board who initiated the project, to the club member who helmed the decorating committee, the member who supervised the project, the team from the contractor Uhler Design/Build, and the member who had the photos reframed and captioned, and the countless members who stepped up with donations of furniture and put in the time volunteering to assist in the renovation and, in the previous week, had swarmed over the club readying it for the opening.

As it turned out, the structure was close to falling down and had the project been delayed much longer, it just might have. But together the members saved the hunt clubhouse and insured that it will be around for at least another hundred years.

Now updated, the club has already hosted member events and is available for rent for weddings, rehearsal dinners, and meetings. It seats a maximum of 180 guests with a kitchen suitable for catering. For more information, contact Susan Rives (Barclay’s sister-in-law—we like to keep it in the family), the club member responsible for events, at events@keswickhuntclub.com.