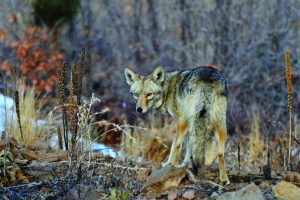 For those of us old enough to remember when Looney Tunes ruled the afternoon cartoon television slot, the name Wile E. Coyote holds fond memories of a scrappy canine and his many failed attempts at catching the infamous and speedy Road Runner.  To many children this was their first exposure to Canis latrans, who, next to the Gray Wolf, is North America’s other well-known and often misunderstood wild canine.

While Wile E. Coyote is known to prowl about on the flat, long desert highways of the American West, our Eastern coyote here in Virginia inhabits a different kind of backdrop. Coyotes are found in almost every environment in our state: forests, fields, suburbs, and city alleys.  They are a notoriously secretive and seldom seen species.  If you do happen to see a coyote, it is most likely due to chance, illness (such as rabies, mange, canine distemper, etc.), or because the animal has become desensitized to humans, which is often the result of either intentional or unintentional feeding. 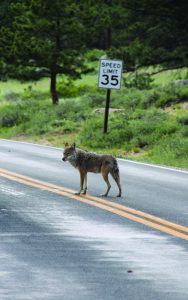 The Eastern coyote is not native to Virginia and instead appeared sometime in the 1950s. The coyote moved right in to the top predator niche, which had been vacant since wolves were extirpated from Virginia sometime around the turn of the century.

Once established, the coyote has done very well in Virginia.  Prey abundance, human food sources (dumpsters, trash cans), diminished hunting and trapping pressure, and incredible versatility have increased the coyote population; and it shows no sign of slowing down.

It might seem unusual to think of a top predator like the coyote living quietly in your neighborhood, but in reality our communities can provide this opportunistic creature with quite a few living perks.  Our yards are often a source of year round food for coyotes, whether it be in the form of squirrels or voles, the garden (I hear they love watermelons), a garbage can, or birdfeeders. Coyotes do not specialize in hunting any one particular prey species, but instead take whatever meal they can get.  While they are often considered hunters of small prey, they will take larger game or livestock if they are abundant and easily accessed within the coyote’s territory.
Although coyotes share top dog status with wolves, their social structure and population abundance is very different. Coyotes mate in winter, usually around January and February. A coyote male and female form a pair bond and raise litters that are born sometime between late March and May. Unlike wolf packs, coyote family groups are tolerable of other lactating or gestating females and do not possess the same intense social hierarchy.

Another key difference between coyotes and wolves are the two species’ responses to management.  Wolves are sensitive to hunting or trapping pressure, and packs have been known to dissolve after the death of an alpha male or female.  Coyotes, on the other hand, are very resilient to management.  Research has shown that 75% of a given coyote population would have to be removed before a decline in numbers is observed. The durability and adaptability of the eastern coyote can make it very challenging for managers looking to control populations in areas where this animal has become a nuisance species.

So, what is a nuisance species? A nuisance species is typically defined as a species that causes adverse ecological and/or economic impacts. The Eastern coyote is classified as a nuisance species, so there is no defined hunting season for this animal and it can be hunted at any time.  There are several counties in the state of Virginia where bounties on coyotes have been established. The coyote’s status as our top predator often causes clashes with humans, pets, livestock, and property.  Coyote conflicts can be both real and perceived.  Sometimes a coyote sighting alone can be perceived as a threat to children or pets. Coyotes generally avoid and fear humans, so a sighting does not necessarily constitute an immediate concern. 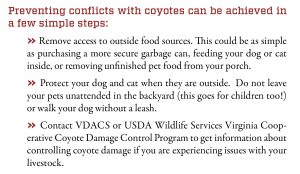 The most common type of coyote conflict involves predation on pets, particularly small dogs and outside cats, and livestock. When attacks on dogs do occur, it is usually because the dog has been left unattended or is roaming freely during the spring and summer when a coyote is raising its young. Sometimes coyotes will attack bigger dogs during the mating season as a territorial response. Human attacks are exceptionally rare, and there are only a handful of cases actually recorded in the U.S. Most of these attacks were by rabid animals or were provoked when a human was near a den.

Coyotes provide us with an important ecological service.  As top predator, they help to control deer herds by predating on fawns and remove other competing predators like red fox, feral cats, raccoons, and skunks that are known nest predators of important songbird species. It has been found that nesting success of songbirds can actually increase in areas with coyote populations. Coyotes can be marveled or feared depending on their societal impacts.