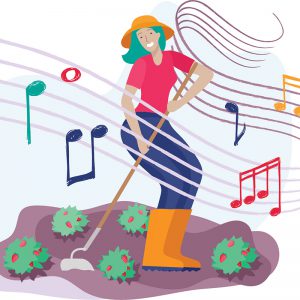 Before Ricky and I met, he was involved in a wine importing venture. (Cool, right?) The business required that the partners travel to Spain in order to discover wines they would agree to import. (Glamorous, right?) He tells a story about one Spanish vintner who played music to the barrels in the cellar to bring out the fullest, richest flavors. (Hilarious, right?)

It sounds hilarious, still, I love that story. I wasn’t there, but I see it all very clearly in my mind, down to the specific details I’ve added myself, including a shaggy vineyard dog, a thin winemaker in a tattered brown barn coat, his lovely wife in a red dress, and the various musical selections, which change depending on my mood when I think about the story.

When I lived in Florida in the late 1990s, the state passed a law requiring all state run daycares to play classical music to the kids for a period of time every day in order to stimulate brain development. I looked it up to refresh my memory for this article. It was Senate Bill No. 660 and it stated in part:

WHEREAS, at birth, a child has one hundred billion brain cells that will be developed by the experiences of life, and

WHEREAS, the stimulation that causes brain development can be positive, such as conversation, music, and parental love, or it can be negative, such as neglect or emotional and physical abuse, and

Based on these principles, the law required educational programs and childcare facilities to provide activities that would foster brain development in children from birth to five years. This included playing classical music. I don’t know if the science backs it up today, but I believe the law still stands, because what makes brains better? You guessed it. Music.

It might not seem like it, but I have a garden connection. The year we put in our first raised beds was the same year a child unknown to us picked up a trumpet in the neighborhood that backs up to ours. If you’ve ever heard a first year trumpet player, you would not be surprised that his parents asked him or her to practice outside. Working in our garden at the end of the day or on the weekends, we were serenaded by the young musician, who I believe to be a male, so I’ll use the male pronouns. I have no hard evidence to support this, though, just a hunch.

I think I speak for everyone within earshot when I say it was painful. There were times when we took long breaks indoors just to give the boy a chance to finish practicing for the day.

It takes time and dedication for a trumpet player to get good, and this kid was no exception. He put in the time and clearly had the commitment. For years our garden was bathed in screechy cat-squallering melodies, and I always wondered if it was having an opposite effect. Instead of the positive transformation the wine underwent, was this “music” negatively impacting the garden? Was that why we couldn’t grow a pepper? Or why the hornworms turned our tomato plants into lace? Or why the downy mildew blanketed the zucchini and the flea beetles devoured the eggplants? Or why we squabbled about how many yellow squash to plant or whether or not to devote any  garden real estate to okra?

Over the years, the kid thankfully got better. We would even occasionally pause in our labors to applaud a song that we actually recognized. We’d cheer the accomplishment and high five each other as if this kid was somehow part of our family. “Look at him stickin’ with it and playing a song,” we would exclaim with pride.

It’s worth noting that over the years, as he improved, so did the garden. We managed to control the hornworms, the downy mildew, and the flea beetles. We grew bushels of peppers. The garden was thriving, and it coincided with the improved quality of music our vegetables received. Interesting.

It had been a long time since we heard the trumpet, and we speculated that the kid had graduated high school and probably went off to college. Then one afternoon in the late spring of this year, sweet strains of a trumpet spilled through the back neighborhood and into the garden. This time the trumpet was accompanied by other instruments. He’s in a band! The music was pure and sweet, and it was all I could do to keep a tear from my eye as I stood and listened until they finished playing. I glanced over our seedlings and smiled because they were being bathed in the lovely strains of his music, knowing it would, indeed, make them more vibrant.

It occasionally occurs to me to go over to that neighborhood and ask around for the young man who plays the trumpet. I’d like to tell that person about the journey we’ve traveled with him. Maybe this year, when the growing season is well underway and we’re harvesting produce from the garden, maybe I’ll take a basket of beans and squash over, just to say thank you for the gift of his music. If the theory holds and the vegetables get to hear his songs this summer, it seems only right we should share the bounty.