The U.S.’ audio-visual heritage is preserved in the Piedmont at the Library of Congress’s Packard Campus

On January 7, 1894, the Library of Congress received its first request for a US government motion picture copyright for a five-second, black-and-white, silent film of Fred Ott sniffing a pinch of snuff and sneezing. The applicant? Thomas Alva Edison.

Rather than taking a still picture, director William K.L. Dickson had captured Ott’s motion on film. Ott was Edison’s assistant at the West Orange, N.J., Edison Manufacturing Co. in the country’s first movie studio. The film, Fred Ott’s Sneeze, a series of 45 frames, is the country’s earliest surviving copyrighted motion picture. A photographic print representing what was on the film is housed in a specially-designed former Cold War bunker, today’s Library of Congress National Audio-Visual Conservation Center (NAVCC) located at the Packard Campus in Culpeper.

Edison went on to produce more than 1,000 films for the public; 341 are stored in the Center, including an even older Edison experimental film, The Newark Athlete, a 10-second, silent film from 1891 for which he did not seek a copyright.

The NAVCC has another Edison motion picture treasure, his 1891 kinetoscope. In this machine, a continuous ribbon of film was rolled on a series of rollers inside an upright wooden cabinet which had a peephole and a magnifying lens so one person at a time could view motion pictures. The kinetoscope became popular at penny arcades for watching short films.

Even earlier, in 1877, Edison had invented a tinfoil cylinder sound recording machine. In the 1880s, he improved on it with wax-coated, cardboard cylinders and the NAVCC is home to thousands. Late nineteenth-century anthropologists used Edison’s wax cylinder devices to record Native Americans’ languages and songs, probably some of the first recorded human sounds. This recording method was used from roughly 1896 to 1915, before flat disk records came along.

These pioneering inventions are just a few of the priceless items in the 7.5-million-item collection of the Center. “We house the audio-visual treasures of the United States,” says Gregory Lukow, the center’s chief, manager of the world’s largest collection of films, sound recordings and radio and television programs, from Gone with the Wind to Groucho Marx to Walt Disney’s first Cinderella to Jurassic Park to Brokeback Mountain. 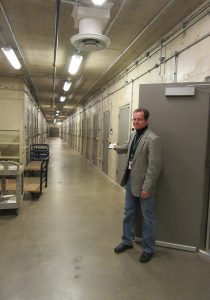 The “short” hallway containing 50 fireproof nitrate film vaults. Behind the double doors at the end is another hallway the length of a football field with 74 more underground vaults storing over four million records (33rpm, 45rpm, 78rpm), wax cylinders, CDs and audio tapes. Photo by Glenda Booth

There’s no roadside sign. Visitors who turn off Route 522 onto Mount Pony Road see a gray, concrete building looming next to what looks like a grassy hill. Two streams of steam appear to puff out of the 784-foot mound, but they are actually rising from two chimney-like pipes of an underground building.

This sprawling, 415,000-square-foot, quarter-mile-long structure was built in the 1960s into the side of Mount Pony, the highest point in Culpeper County, for the Federal Reserve Bank to store billions of dollars in currency. Designers wanted the building to be bomb proof in case Washington, D.C. was attacked. Ninety percent is underground. Its 173,000-square-foot green roof, the size of three football fields, is one of the largest of its kind on the East Coast.

In the early 1990s, the audio-visual collection was spread across four states. A 1997 law authorized the Packard Humanities Institute, a non-profit foundation dedicated to archaeology, music, film preservation, and historical archives, to purchase the decommissioned Federal Reserve building. The bunker-type building was ideal to hold the nation’s cultural treasures. In 2007, the institute’s head, David Packard, gave the facility to the US Government, a $160 million gift, the largest private sector gift to the federal government in history with the exception of James Smithson’s bequest of the Smithsonian museums in the mid-19th century. Packard, a Californian, had a long-established interest in movie preservation and wanted a permanent record for the nation.

But it’s not just an archive. Experts in three preservation laboratories are digitizing much of the nation’s audio-visual media, including obsolete formats dating back 120 years. Among other challenges, staffers deal with physical degradation and obsolescence, such as lacquer discs and magnetic tapes used from the 1930s into the 1990s.

Preserving forever American cultural creativity is a calling for these employees. Lukow, the head since 2007, explains, “It’s the audio-visual history of our country. It’s vitally important to understand our nation, its strengths and weaknesses, whether it’s newsreels or Groucho Marx or Gunsmoke. It tells us a lot about who we are, what we cope with. We have to understand the historical context. If you read a book, you have to imagine what the people and the times looked and sounded like. With audio-visual products, we can hear and see.”

AV production over the years

A tour of the center is a veritable tutorial on audio and visual production’s evolution, from Edison’s early devices to today’s cutting-edge digital technologies.

Take movies, for example. Today, production companies send a digital cinema package (DCP) to theaters. One hundred years ago, a technician hand cranked a projector to unspool and respool reel-to-reel film. The operator could crank faster to speed up a chase scene and crank slower for a crying scene. Between 1925 and 1940, projection equipment had motors and gears to propel reels of vinyl film at a steady speed. The film was especially flammable, so theaters had trained union projectionists. Starting in the 1920s, non-flammable, “safety film” evolved and schools, churches, and homes showed movies using reel-to-reel projectors. In the 1980s and 1990s, many home movie buffs plunked magnetic tape video cassettes into home video players. Today, people pop a digital versatile disk (DVD) into a DVD player, live stream movies to their computer or mobile device, or subscribe to a movies-on-demand cable television channel. 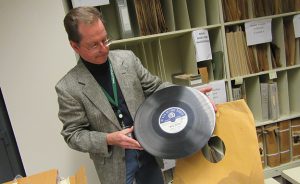 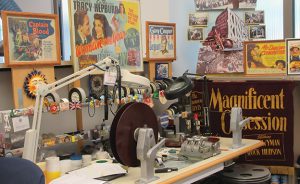 A film lab where experts can repair damaged film and prepare it to be copied and preserved. Movie memorabilia decorates the work bench of film inspector Richard Hincha. Photo by Glenda Booth 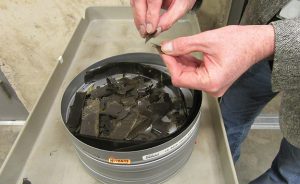 Nitrate film deteriorates over time and becomes very brittle, like these fragments. Photo by Glenda Booth

The center’s 120 employees, many with very specialized skills, manage the 7.5 million items and nearly 90 miles of steel shelves in 124 custom-designed vaults 20 feet underground in spaces set at 30 percent humidity and a constant 37-degree temperature. The area storing compact disks, vinyl records and wax cylinders spans the length of a football field.

The highly flammable nitrate film is in a room with spark-proof lights and switches. From 1890 to 1950, 85 percent of all silent films and half of films before World War II were made of nitrocellulose. When they age, they get very dry and brittle and even crystalize. Some of these films were lost, burned, or deteriorated. 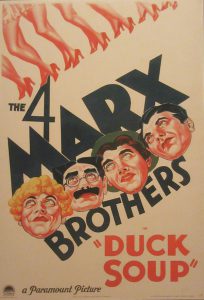 A replica of a 1933 poster promoting the Marx Brothers movie “Duck Soup.” Photo by Glenda Booth

The center’s preservation work is not without challenges. Technology is ever-changing. “Every 20 years, the technology doubles on how much information we can get from the analog media as well as the amount of detail the digital copies can offer,” explains Larry Smith, Nitrate Film Specialist. “As in the VHS of The Wizard of Oz (1939) compared to the DVD and now the Blu-Ray restoration, I think it looks as good or better than new.” Today, fine detail is measured in bytes and conservators can repair and copy film in ways not envisioned just 10 years ago.

The center hopes to convert and preserve much of its collection to digital files, which means that staffers have to learn new technologies as they emerge. The same is true of managing the facility, its special vaults, and mechanics. And there’s always the “mixed blessing” of a steady flow of donations backlogged and awaiting preservation.

Smith worries that the pioneering movies of the 1930s and 1940s are losing their allure among today’s younger generation, who are more likely to click around the internet and Facebook or text and tweet than watch an old movie. Nevertheless, the center wants to maintain these gems forever. “Today, there are more film titles available to the public than any other time in our lives and the Library of Congress is America’s treasure chest of audio-visual culture,” Smith underscores.

“It is important to foster an environment that encourages the preservation of our nation’s cultural resources, and films and music are a big part of the American experience,” Iowa Senator Charles Grassley told his colleagues in 2016. The National Audio-Visual Conservation Center gladly accepts that challenge. Thomas Edison would no doubt approve.

Gems housed at the Packard Campus

Public access to the center is limited. On most Thursdays, Fridays and Saturdays, the public can watch classic movies in the 205-seat theater reminiscent of a 1930s movie palace with ornate chandeliers, cloth wall covers and red velvet curtains. Two projectors play 35- and 70-millimeter films; one reel-to-reel plays 16-millimeter films; and one digital projector plays digital films. A custom-made organ provides music for silent films, as in yesteryear.

Every Columbus Day, the center hosts tours of the whole building at 15-minute intervals, attracting 400-500 visitors.

To see the schedule of films to be shown, click here