Out of the Mouths of Dogs

Though our dogs have limited vocabularies, there’s no question they talk to us.

Butter, the Jack Russell, jumps up on me when I’m sitting down and turns his head to the side, which means, “Scratch behind right ear, please.” When we gather up his toys and store them in a plastic wastebasket, he goes nuts and madly scratches the plastic with both paws as he squeals his lungs out. I take his noise to mean, “How am I supposed to find my favorite toy when you’ve got them all packed away like this?”

Lucy, the corgi/Sheltie mix, tries to protect us from the vacuum, which she considers an instrument of the Devil. When someone flicks the switch, Lucy goes into a barking frenzy, warning us, “Watch out for this @#!!&%+*# thing! If we don’t watch it, it’ll eat us alive. Just look what it does to dust. I mean, c’mon.” 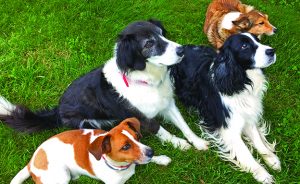 Ivy, the Springer, comes up with a ball and drops it in front of me, saying with her eyes, “Look, I’m, like, totally bored. How about letting me pretend I’m Ted Williams for a while? Will you please chuck the thing for me?”

Recently, Dylan’s been taking to leaving messages for us. No, he can’t write, but he sure does let us know what’s on his mind. When we’re planning to be away for say, three or four hours, we leave the pups in the garage where their comfy crates are located.

It started with two bags of crap we bought to repel deer. And I mean crap: it’s purified sewage from D.C. Deer are supposed to hate it. But last year, they ate everything before we got a chance to put it down, so we stored the two 50-lb. bags in the garage. Dylan ate the top of one bag, then pulled it down so the stuff spilled out all over the garage floor. He probably took a couple tastes, too.

Next, Annie left a bag of chocolate coins out on her worktable to include in Christmas gifts. Not only did Dylan wreck the gold mesh bag they were in, he somehow worked open the coins and ate the chocolate inside. Our garage floor looked like a beach after a pirate raid, gold coin wrappers scattered everywhere.

What he was trying to tell us was: “Look, I’m fed up with being left alone, so what do you expect me to do, lie in my crate counting toenails?”

I guess Dylan felt like we didn’t get the message, so the next time we left him in the garage, he took a plastic purse filled with costume jewelry my wife was going to take to Goodwill. Not only did he chew the bag to shreds, he lit into the bracelets and necklaces, tearing them apart, spewing beads and ersatz gems everywhere.

We were getting the message. We made sure we cleaned up the garage and Annie’s worktable. So I thought nothing of leaving a 40-lb. bag of birdseed out on the garage floor until I could get the Gator and transport it out to the feeders. “What’s he going to do? Rip the bag apart and eat birdseed?” I asked Anne.

We quickly found out. It took me an hour with my backpack blower to get rid of it. We also learned what happens when a dog eats bird food. His stools became studded with seeds. Seeded doo-doo was all over the yard.

Dylan was telling us, “Look, I don’t like the stuff, tastes like hell and makes me poop like there’s no tomorrow. But if you don’t stop locking us up in solitary, I’ll eat everything in this bloody garage. Just try me. Next I’ll be eating the cars.”

Though we’re a little slow on the uptake, we finally got it. Now we leave the four dogs in the house with one of the sliders open so they can get out when they please. Oh, there have been some muddy paw prints on the furniture, but that sure beats retrieving beads, picking up chocolate coin wrappers, blowing seeds and sweeping up D.C. sewage.

If we’d just listened in the first place.