An ancient art flourishes in Fluvanna

For more than three decades, the small community of Bremo Bluff, in southern Fluvanna County, has been home to a well-kept secret.  Just off the main road, down a gravel lane and through an open field, stands a worn, low-slung building. The wood is rough and bleached grey. A tangle of vines stretches across the roofline.  A horseshoe nailed to the door catches good fortune. 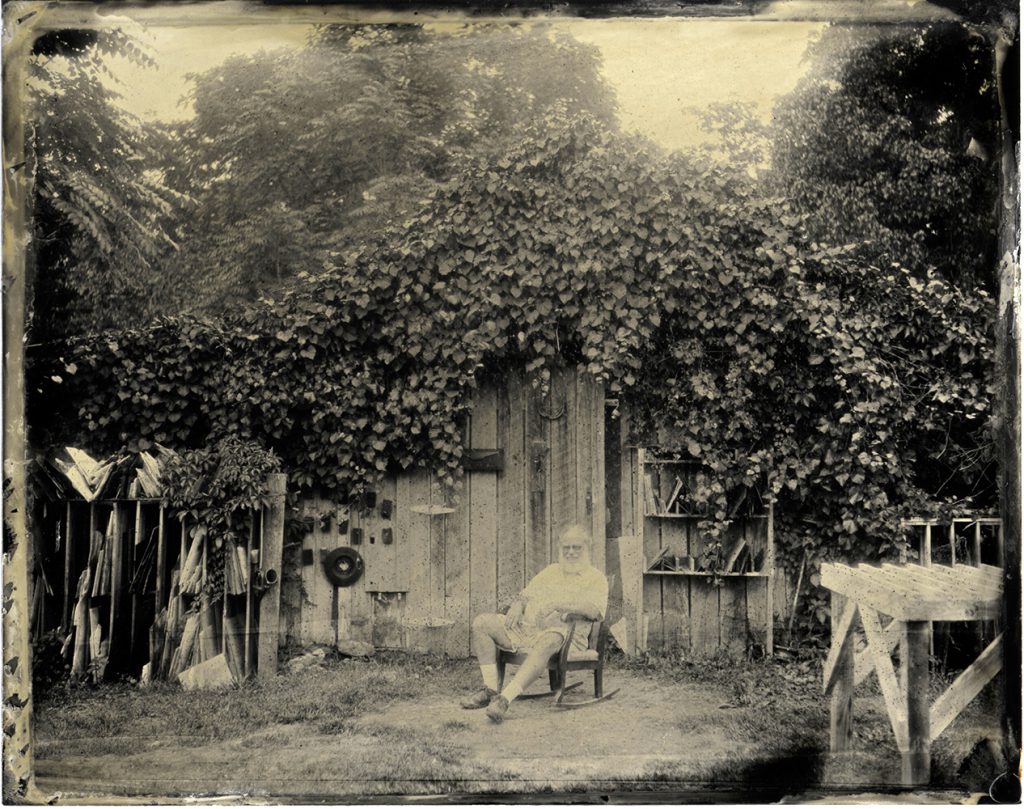 Summer at the Studio tintype by Emily White

It could be any farm outbuilding in a hundred rural communities across the Commonwealth.  The only hint of the treasure that lies inside is the man working out front. He leans over, taking a closer look at several century-old stained-glass windows, pulled from a church in Monterey, Va.  As he works, decades of dirt and grime peels away to reveal translucent yellows, blues, and purples that sparkle in the afternoon sun. In a few months’ time, the restored works of art will once again grace the church’s walls, filling the sanctuary with rich, vivid hues. 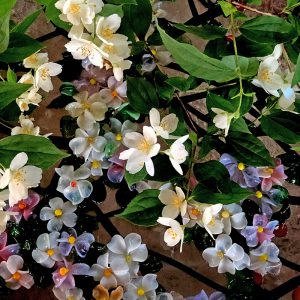 Tug open the door and step inside, and the world shifts from careful restoration to vibrant creation.  Shelves are stacked with the raw materials of innovation – spindles and sheets of glass, jars filled with color dyes and stains.  Rows of work benches march to the back of the studio, strewn with pliers, sheafs of pencil drawings, and industrial equipment. Drills, brushes, saws, and clamps extend from floor to ceiling along a nearby wall.  A tub holds hundreds of delicate green leaves, destined for a flameworked masterpiece featuring dogwood blossoms cascading across a Virginia landscape. 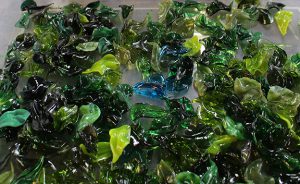 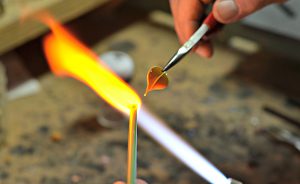 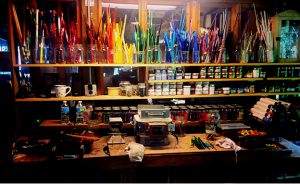 Welcome to the studio of Wayne Cain, one of the country’s foremost stained-glass artists.

Each day, Cain and his staff work together on commissions and renovation projects.  Around them, light pours into the studio through dozens of windows. “We create one-of-a-kind works of art, inspired by our imaginations and the creative process,” he says, gesturing at several major projects under development.  Fresh out of college in the early 1970s, though, seeking a life of independence and creativity, Cain started small. He was struck by the translucency of nature, watching sunlight filter through the trees. “It started there. I bought a crate of glass, a couple of glass cutters, and a pair of pliers,” he recalls.  “Working at my kitchen table, I made glass apples, pears, cherries, and chickens that stood on one leg. I sold them at craft fairs and in gift shops.” 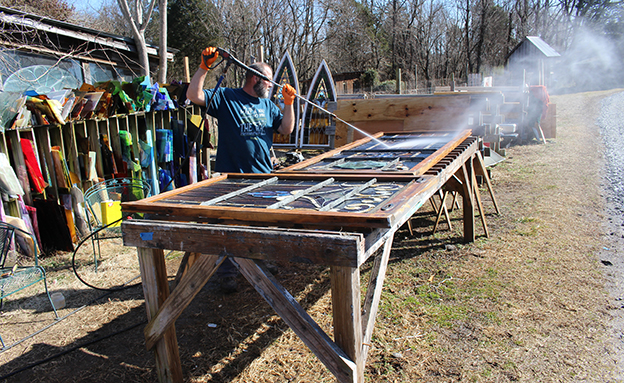 The beauty of the stained glass in Richmond’s historic Fan District soon inspired new ideas, and Cain turned to making Tiffany-style lamps and stained-glass windows.  “I found a set of 1915 Henry Lang beveling machines and taught myself how to bevel,” he says. “After a few years, I developed my own style of beveled glass windows by beveling different thicknesses, of clear glass with various angles, textures, and colors.  I went on to develop my skills in carving glass, silvering mirrors, painting, and flameworking. The beauty of teaching yourself is that one doesn’t know when to stop.” 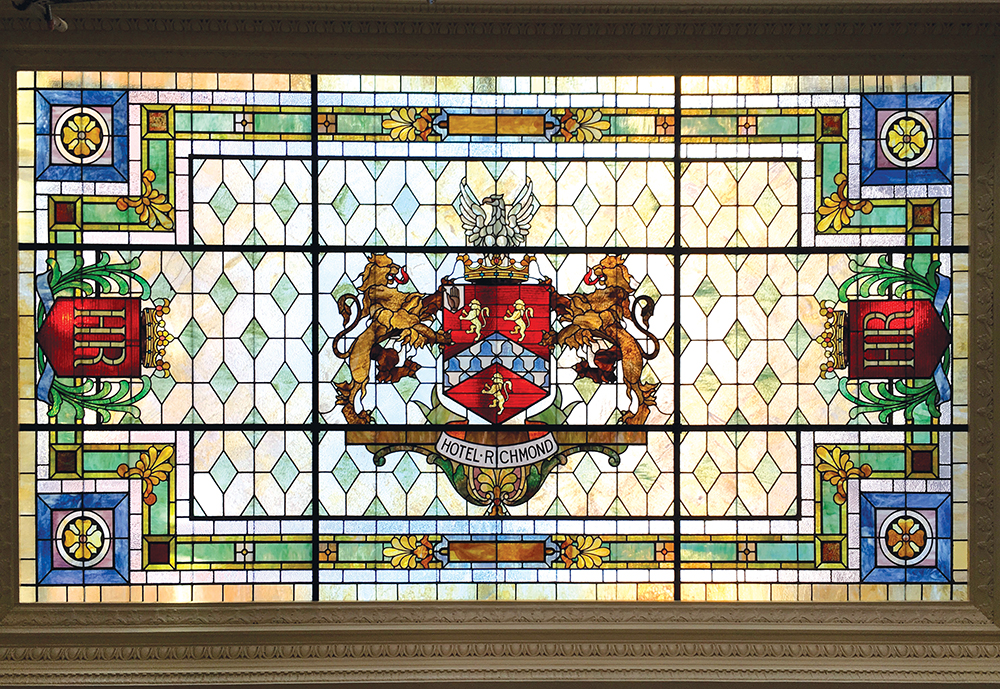 One of three large skylights restored for the historic Hotel Richmond. Courtesy of Wayne Cain

This focus on continued innovation and creativity has been a driving force in the artist’s work and his mastery of the medium.  Cain operated a busy studio in downtown Richmond for twelve years before moving to Bremo Bluff, renovating a 1907 farmhouse for his family to live in and an old buggy barn for his studio.  He explains that the move helped reinvigorate his art, with the area’s rural beauty and solitude serving as a source of inspiration.

Today, Cain’s masterpieces are found in homes, schools, businesses, and churches across the country.  Recent major clients include the Billy Ireland Cartoon Library and Museum at Ohio State University, the Winchester Medical Center, and the Tobacco Company Restaurant in Richmond.  About half of the studio’s work comes from commissions, with renovation efforts such as the Monterey church windows making up the rest of the studio’s projects. “I enjoy the challenge of commission work,” he says, pointing out preliminary plans for a new transom window for a home in Midlothian.  “I learn so much from each of our clients. I seek out their interests and their passions. And then I work hard to bring them to life.” 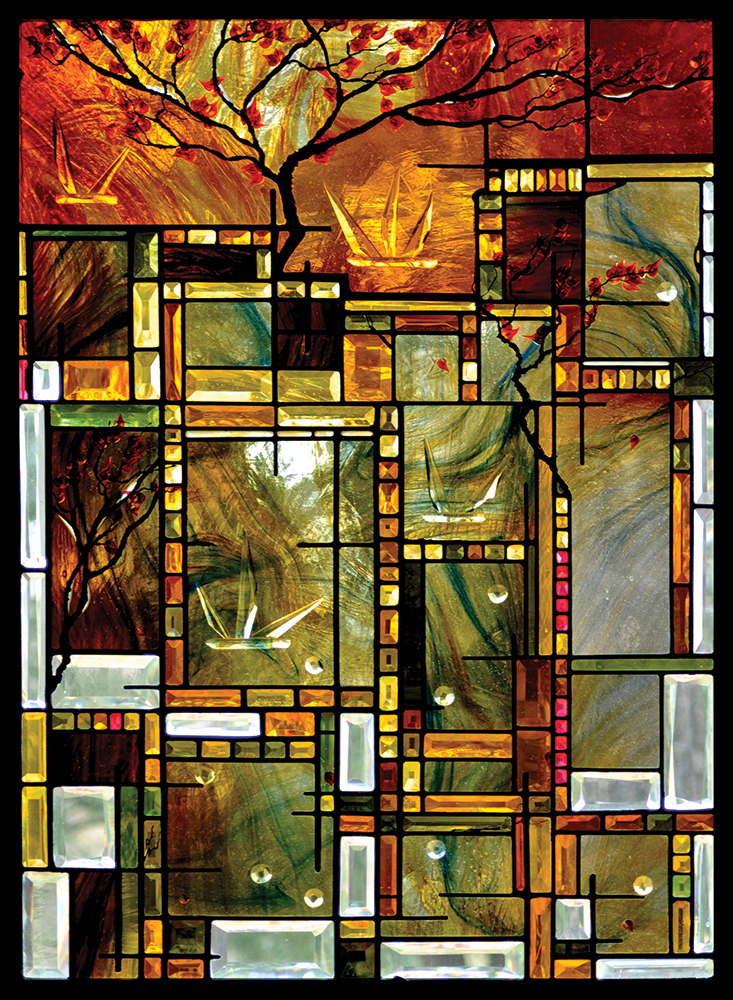 Cain’s studio is known for its painstaking attention to detail as well as its innovative designs. His projects infuse the centuries-old craft of stained glass with new ideas and a reverence for community and history.  Commission designs will often go through dozens of hand-drawn iterations, with the glass sourced from Europe as well as the US. Tiny variations in the coloration of each piece of glass and subtle changes in how light filters through the glass over the course of each day are tracked, considered, and discussed.  “This work takes time,” Cain notes. “It can take months of preparation before we cut the first piece of glass. The whole crux of it is being creative and having ideas, and then being tenacious and having the persistence to see things through.” 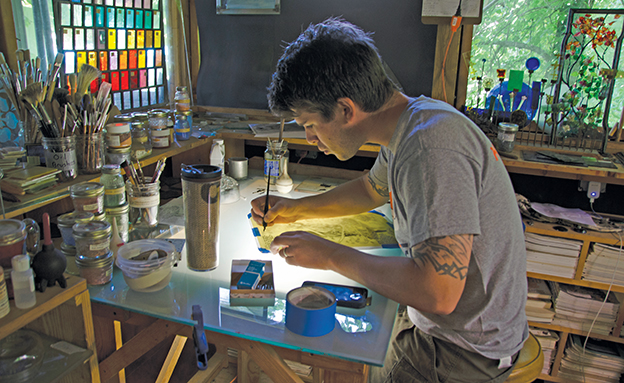 Daniel in the studio. Courtesy of Wayne Cain

Cain is also mindful of the importance of sharing his skills and knowledge with the next generation.  His stepchildren worked with him in his studio as they grew up, with stepson Daniel White eventually becoming an accomplished stained-glass artist in his own right.  “Daniel’s focus is on glass painting, which I consider to be the most challenging segment of art glass work,” Cain says. “He is one of the most intelligent and hard-working people I have ever known. His imagination and artistic integrity inspire me in my own work.”  Today, the two artists continue to collaborate on several projects each year. 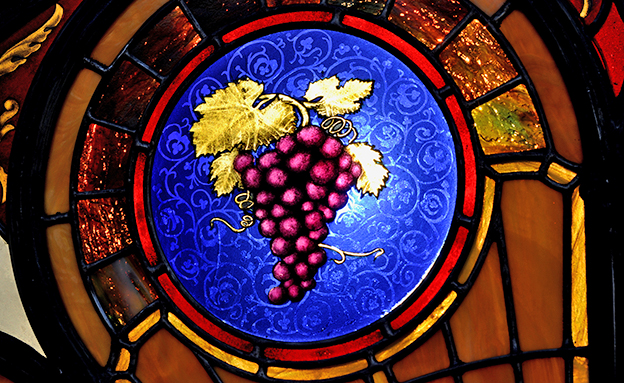 A section from one of the two rose windows that Daniel painted for the St. Thomas Aquinas Priory in Charlottesville. Courtesy of Wayne Cain

In recent years, Cain has also steadily added assistants to the studio as demand for his work has grown.  New commissions and renovation projects come in through the studio’s website, social medial, and old-fashioned word of mouth.  The studio works at a faster pace now than ever before, and that suits Cain just fine. “I’ve learned that I like being part of a team,” he says. “I’ve welcomed this transition, coming to work each day with such wonderful people who share my passion and contribute their thoughts and skills.” 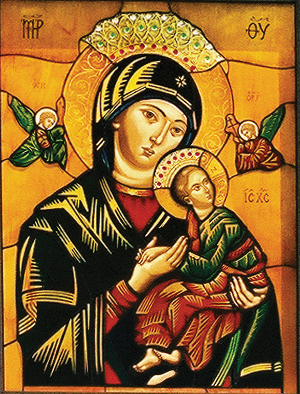 “Our Lady of Perpetual Help,” St. Thomas Aquinas Catholic Church in Charlottesville. Cain: “We were given this Icon by the stained glass committee to reproduce for their new chapel. One does not change an icon. We created the highlights for this window by acid etching European flash glass that is blow clean and dipped into a colored glass. The background was stippled onto a golden piece of glass to look like parchment. Glass jewels were used in the crown surrounded by small pieces of beveled glass for highlights. The faces and hands we delicately painted over a period of four firings in the kilns.” Courtesy of Wayne Cain

Now in his seventies, Cain shows no signs of slowing down.  His eyes sparkle as he discusses his life’s work. His hands move animatedly in the air as he describes new technical challenges to be worked through.  He threads his way nimbly through the studio, highlighting his assistants’ efforts as he steps past them. Then, he stops. He stares out a window for a long moment, perhaps savoring the light that continues to inspire him.

“As the saying goes, life is not a dress rehearsal,” Cain says, looking back over his shoulder.  “It’s been an interesting journey. I’m going to keep on doing this — being an artist — until the day I’m gone.”  Wayne Cain’s legacy – the stained-glass masterpieces as well as his spirit of relentless curiosity, innovation and creativity, and his lifelong journey of exploration and self-expression — will live on for much longer.