Corry Blanc’s childhood memories are rich with the sights and smells of a metal shop. He fondly recalls watching his grandfather build hot rods, repair farm equipment, and everything in between at his shop in Georgia.

A tinkerer by nature, Blanc used to take his toys apart to see how they worked. During his teenage years he got into ceramics. “The concept of taking raw materials and creating something useful, beautiful, and long-lasting was really intriguing,” he said. Then one summer his uncle, who owned a metal fabrication studio, asked him to help with a railing installation. “I was instantly hooked,” he said, and wound up apprenticing under him for the next four years. 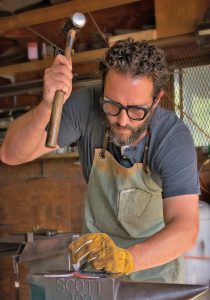 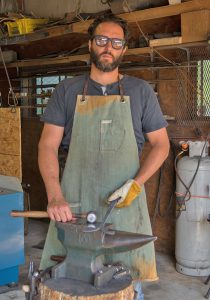 He found himself in Charlottesville after following a girl to grad school at the University of Virginia. “That relationship didn’t work out,” he said. “But I fell in love with central Virginia and never looked back.” There he landed a job at a local blacksmith studio where he forged metal for the first time.

“As soon as I started forging, I realized how similar it is to working with ceramics,” he said. “You basically start off with a certain amount of mass and reshape it to the design you want.” He caught on very quickly and after a year decided to branch out and start his own shop in Charlottesville, Blanc Creatives. The focus at the time was high-end residential iron work such as railings, gates and hardware. But in the market downturn of 2008, custom iron work was a luxury not many were looking for. To make ends meet Corry supplemented his metal business with catering, bartending, and waiting tables.

Blanc then got the idea of bringing his two worlds together, and felt he could make a better frying pan than what he was seeing in the restaurants where he worked. The rest, as they say, is history. Using nearly indestructible carbon steel, Blanc Creatives’ flagship line of cookware got noticed among local chefs first, then far beyond. Blanc earned top prize in Garden & Gun’s “Made in the South” Award in 2015. That changed everything. He went from creating 10 to 15 pans a week with one assistant, to his current level of producing as many as 75 pans a week with more than 15 employees.

Corry’s role at the shop has changed much over the years. He has transitioned out of the production shop and has allowed his crew to take over. He spends his time on the big picture now, designing and prototyping new products, overseeing production, and planning out the future of the business.

“I have my own personal studio now where I still heat and beat out products from time to time,” he said. “But the day to day is pretty much spent stoking the fire that has become Blanc Creatives.”