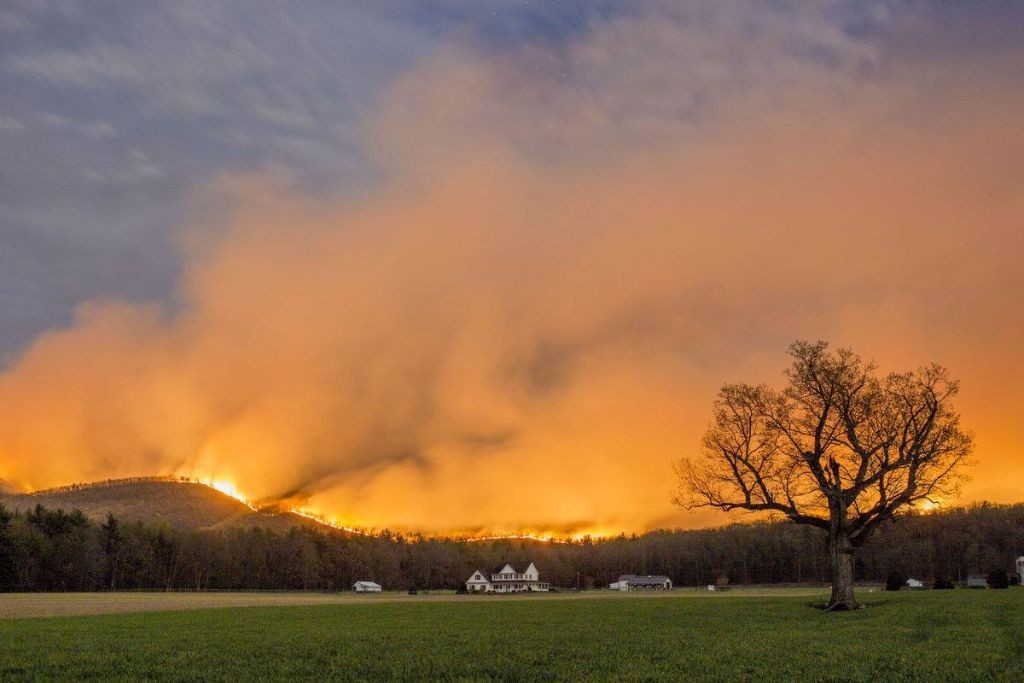 As many of us have watched the April 2016 Shenandoah National Park fire grow from our computer screens, others have watched it burn right in their own backyards. The above photo of Tina and Alan Grove’s Stone Gait Farm in Elkton, VA (source unknown: Facebook) shows exactly that. As of Tuesday April 26th, the fire has grown to over 10,00 acres, but is thankfully now 70% contained per SNP. In perspective, over 16 square miles have gone up in flames—that is just under the size of the city of Harrisonburg.

While most see this as being a major scar on the land, natural fires in this area should occur every 8 to 9 years due to the level of fuel (leaves, pine needles, etc) on the forest floor. Natural fires refine the area, and bring new life to species that thrive off of lower natural fuel levels in the soil. Much like farmers who burn their fields to help new growth arise, forest fires help forest floor plants and other species thrive.

Below is a statement from Shenandoah National Park Superintendent, Jim Nothrup, about this months fire.

AN OPEN LETTER FROM THE SUPERINTENDENT OF SHENANDOAH NATIONAL PARK

As many of you know, Shenandoah National Park is experiencing a very large wildland fire, currently the second largest in the Park’s history, at 9,386 acres. Understandably, the fire has caused a great deal of concern from park neighbors and supporters, and there has been some misunderstanding about how the fire is being managed. I would like to use this letter to better inform everyone about how it is being managed, and provide you with a current update on the status of the fire.

This fire was first reported to the Park on Saturday, April 16 at about 1PM. It was burning in the Park’s South District, along the Rocky Mount Trail, in designated Wilderness, several miles from the nearest trailhead. This is a very remote and rugged portion of the Park, with no roads and no infrastructure, such as fire hydrants. While the cause of the fire remains under investigation, it is believed to have been human caused.

After hiking in, the first firefighters to arrive on scene found the fire was too intense for a safe direct attack and was growing quickly. The firefighters focused on evacuating the hikers and backpackers near the fire, and as they completed their initial size-up, estimated the fire to be 70 acres in size. They immediately ordered additional firefighting crews and equipment, including wildland fire engines and a helicopter for water drops. On that first day, to better support the suppression effort, I also authorized the use of chainsaws, leaf blowers, and helicopters in the designated Wilderness – tools that are not normally allowed in Wilderness, except in emergency situations.

By early the next morning, before additional fire crews could arrive, the fire had grown to 200 acres, burning in steep and rugged terrain and was continuing to grow rapidly. Fuel moistures were at historically low levels and we were observing flame lengths, fire behavior and spread that are quite unusual for this part of the country. As the fire continued to grow in size and intensity, we ordered more crews, engines and aircraft from all over the country. By the end of the day, the fire had grown to 500 acres, and recognizing that it was going to quickly overwhelm our local fire organization, we ordered a Type 1 Fire Incident Management Team – the best trained and most experienced fire managers available in the United States. We also called for assistance from the Virginia Department of Forestry and the Rockingham County Department of Fire and Emergency Services.

From the beginning, the only option for the Park was to manage the fire. When direct attack of a fire is unsafe, as it was in this case, fire managers have no choice but to revert to indirect attack – pulling back and selecting defensible locations (such as roads, natural barriers or constructed fire lines) where there is a reasonably good chance of safely stopping the fire. This defined area is known in fire management as the “Maximum Management Area” (MMA) – and for this fire was defined as keeping the fire west of the Skyline Drive, east of the park’s western boundary, south of Beldor Hollow and Gap Run and originally, north of One Mile Run Trail. As the fire growth continued to exceed our expectations, the southern limit of the MMA has had to be adjusted, but the other original boundaries have remained the same. It is important for the public to understand that allowing the fire to come to these stopping points, where safe, defensible positions have been prepared is not the same as “letting the fire burn” out of control.

From the moment this fire started our two primary objectives in managing this fire have been 1) ensuring firefighter and public safety, and 2) keeping the fire within the Park boundary to protect private property and structures outside the Park. I am pleased to report that these efforts have been largely successful. To date, despite the high risk, and very intense fire behavior, there have been no serious injuries on the fire, and no structures have been burned. There was one area where fire crossed over the containment lines, into the woods in Beldor Hollow, which burned a total of 180 acres. That area is now secure.

The fire continues to be managed by the Type 1 Incident Management Team (under a Delegation of Authority from the Park). The goal remains the same – to keep everyone safe and keep the fire within the Park!

While the Park did not ignite, nor wish for this fire under these very dry and windy conditions, natural resource managers feel that overall, the fire will be beneficial to forest health in this part of the Park, which is classified as a Fire Ecology Zone, with several fire dependent species. Having not burned for over 85 years, (in an area where low intensity ground fires should naturally occur every 3-9 years) the Rocky Mount area of the Park has had an unnaturally high level of fuel accumulation (leaves, pine needle litter, branches and fallen trees) and was destined to burn at some point. As a result of the fire, organic material and other nutrients have been recycled into the soil, which will stimulate new plant growth. Burning primarily leaves and dead and down material, the fire will result in very little tree mortality, and very little negative impact on wildlife species, which have evolved in the presence of fire over thousands of years. The fire will be particularly beneficial for several plant species including native grasses and wildflowers, oak and pine communities. Wildlife, including white-tailed deer, black bear, songbirds and many other species will benefit from the acorns, blueberries and other seeds, produced by plants rejuvenated by fire. Because the fire has been burning in designated Wilderness, we have also been using “minimum impact suppression tactics” to minimize the damage from suppression activities and all fire lines will be rehabilitated after the fire is out.

We are enormously grateful to the Virginia Department of Forestry, the Rockingham County Department of Fire and Emergency Services, and the hundreds of firefighters and support personnel from 33 states that have helped us keep this fire in the park. We are sorry for the fear that this fire has caused and the smoke impacts to surrounding communities, but this fire has been a powerful and humbling reminder for all of us that nature is a very powerful force. We encourage everyone who lives adjacent to national parks, national forests, and other wildland areas to fire proof your personal property and keep a safe zone around your homes. The truth is that despite all our fancy equipment, humans just cannot quickly suppress a fire of this size and magnitude.
The recent rain has helped a great deal in dampening this fire, but it is not out yet. We are continuing to mop up the inactive areas of the fire and working to fully contain it. Once it is fully contained it will have to continue to be carefully monitored and managed until there is a significant precipitation event and it can be declared completely out. You can continue to monitor the progress of the fire at http://inciweb.nwcg.gov/incident/4689

Thank you for the many notes of support and encouragement we have received during this difficult time. We are committed to being good stewards of the Park, and good neighbors.